Biggest World Cup disappointment so far, Denmark knocked out bottom of the group. 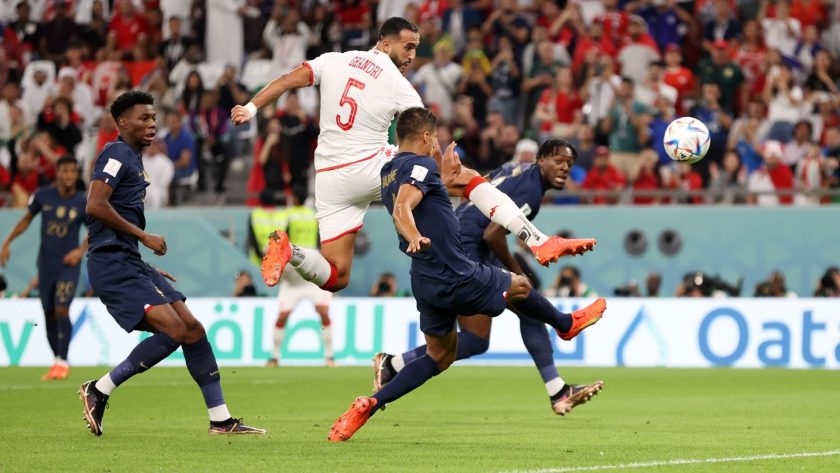 With a round of 16 guaranteed, France rested all the holders practically, keeping only Varane and Tchouaméni among the main ones. Camavinga played as left-back and Disasi as right-back.

Meanwhile, Tunisia had several changes in the starting lineup for the decisive duel. Khazri earned his first chance as a starter positioned as a “fake centre forward”. Kechirda and Ali Maaloul came on as wings and Msakni was on the bench.

Even with the alternative lineup, France’s expectation for a good performance was assured due to the difference in technical quality between the players. However, the French performance disappointed the fans due to the lack of will of the players.

Tunisia managed superiority throughout the first half, creating opportunities to attack and dominate the spaces, but the goal was lacking before the break. Camavinga, at left-back, had one of his worst performances for France.

The offensive power of the French team was also impacted with only three shots. Varane and Konaté also missed several moves, inside and outside the penalty area.

Meanwhile, Tunisia created chances of danger in the transitions and won the individual duels, remaining only to improve the quality in the final third and in the decision-making.

The Tunisian quality emerged in the second half with Wahbi Khazri, with an excellent and deserved one, in the face of apathetic behaviour from the French who did not take advantage of the opportunity to seek a place in the starting line-up.

Didier Deschamps activated Griezmann and Kylian Mbappé to try to seek the tie, but it was not enough and France lost its invincibility in this World Cup.

Considering that there was a considerable increase in intensity with the entry of some starters, France will not have any major repercussions with this defeat. On the other hand, Tunisia achieved a historic result, despite the elimination.

Denmark opted for changes in the starting lineup. Skov Olsen returned, but Lindstrom followed in the midfield line. Jensen formed a trio of midfielders, freeing Eriksen to act with greater freedom, no longer alongside Hojbjerg. Finally, Braithwaite came on as centre-forward, his third in three matches.

On the other hand, the novelty in Australia was the use of the third right-back in three matches. After Atkinson and Karacic, defender Degenerek occupied the space.

In the first 30 minutes, Denmark controlled possession and demonstrated their best offensive version since the start of the World Cup. Jensen’s good participation and Braithwaite’s pivots were decisive for the good performance.

In addition, Andersen’s distribution of plays with launches to Skov Olsen scared Australia at times. However, the Danes still struggled to create real goal chances.

Even with good movements by Lindstrom, Denmark found problems in the last pass and did not transform the dominance of ball possession into better chances, in front of a defensive and well-organized Australia.

In the second half, Denmark came back worse, failing to be creative in the offensive field and midfield predictability, leaving all the offensive plays concentrated on Eriksen and Maehle. With that, Australia took the opportunity to seek the classification goal.

Shortly after Tunisia’s goal against France, Leckie dribbled past several markers and kicked hard to score a great goal in favour of Australia, guaranteeing the party in an unlikely classification.