Cristiano Ronaldo and Bruno Fernandes are guaranteed in the round of 16 of the World Cup after two victories for Portugal. 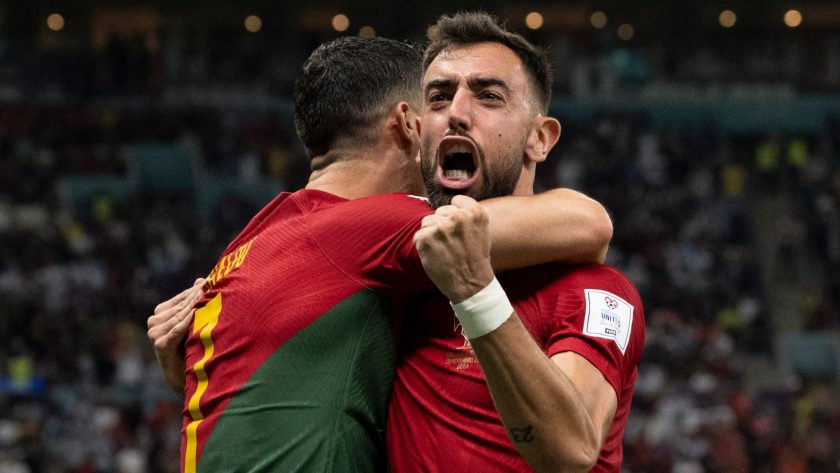 Needing the victory to put themselves in a favourable situation in this group stage, Uruguay changed the starting line-up. Coates formed a trio of defenders, with Varela on the wing for Darwin Nuñez to be closer to the penalty area. Finally, Cavani inherited Suarez’s seat after great impact against South  Korea.

On the other side, Portugal entered with Nuno Mendes at left-back and William Carvalho in midfield, inheriting Otávio’s vacancy. In addition, Pepe replaced Danilo (injured), but coach Fernando Santos kept Rafael Leão on the bench.

The first 30 minutes saw little action with Uruguay stuck in the midfield and Portugal lacking in finishing quality, despite their greater dominance in possession of the ball. Even so, the two teams entered with greater concentration.

Portugal opted for the exchange of passes and movement with greater rotation compared to the first match. Meanwhile, Uruguay tried more direct links and was very physical.

The Portuguese did not create any real goal chances in the first half and the Uruguayans chose not to cross the midfield. But the space duel between Giménez and João Félix was the highlight on the pitch.

In the second half, Portugal’s greater intensity resulted in Bruno Fernandes’s goal, in an attempted cross for top scorer Cristiano Ronaldo, justifying the good moment of the selection.

However, the Uruguay team grew with De Arrascaeta and Luis Suárez, balancing the actions and increasing the quality of this special duel with an elimination knockout atmosphere. However, the decisive move occurred precisely with Giménez committing a penalty by using his support arm in the penalty area. Bruno Fernandes secured the victory and classification for Portugal.

Regarding the results achieved, Portugal is above expectations now. The two victories can give the necessary confidence for Fernando Santos’ selection in the round of 16.

In the other Group F match, the Ghana national team overcame South Korea by 3-2 with strong emotions and extreme tension.

Ghana had starting lineup changes compared to the debut. Lamptey came on at right-back and Mensah moved down the left, rejoining the four-man line-up. Also new was the return of Jordan Ayew.

The Ghanaians had better finishing quality and opened up a two-goal lead thanks to Jordan Ayew’s crosses. South Korea had started better, but Kudus won duels and pulled sprints through the midfield, fulfilling several functions.

In the second half, the Koreans reacted after Lee Kang-in entered, contributing decisively with a tackle and assist in the first goal, paving the way for a draw. However, the Ghana national team was again in front of the scoreboard and held the offensive momentum of the Koreans until the 100th minute.