Brazil’s dull performance against Switzerland will have a softening effect thanks to Casemiro’s great goal. 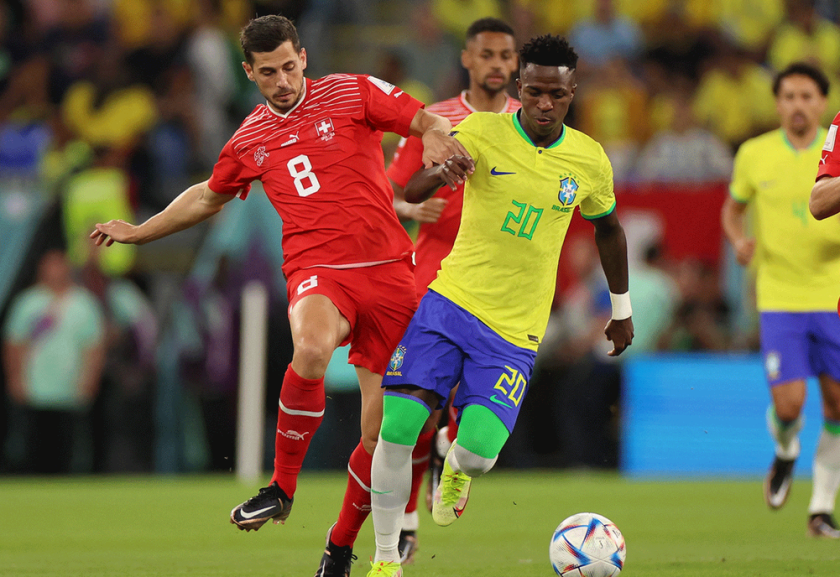 The main headline this Monday at the World Cup was Brazil’s advance qualification to the round of 16 after winning against Switzerland by 1-0.

Without the presence of Neymar and Danilo, coach Tite opted for Eder Militão at right-back and Fred in midfield, leaving Daniel Alves on the bench, fulfilling the expectations anticipated by the Brazilian press.

On the other hand, Switzerland opted to start with Shaqiri on the bench and Rieder for the first time in the starting line-up, a providential player in the Young Boys to fill the midfield and try to help with offensive transitions.

The first half confirmed expectations of a challenging duel for the favorites for the world title. Defensively consolidated, Switzerland competed and prevented real goal chances even with several decisive Brazilian players.

The difficulty of finding Paquetá and Fred at the back of the defensive midfielders was decisive for Brazil’s poor performance. In addition, Raphinha and Vinícius Júnior on the flanks were not well used because of the slowness in setting up plays.

Switzerland, meanwhile, dropped the intensity at every possible moment with Akanji balancing possession with early passes.

The beginning of the second showed the same difficulties for Brazil and Switzerland started to risk a little more in the offensive field. However, coach Tite activated Rodrygo, responsible for moving around in the reduced spaces inside.

Another important change was the entry of Bruno Guimarães, appearing to distribute plays, circulating the ball with more speed, and maintaining the strategy to trigger Vinícius Júnior on the left side.

Richarlison left the field with a bad performance, for not being able to generate much support, in addition to the reduced spaces, repeating a performance below expectations as occurred in the first match (where the two decisive goals erased the bad performance against Serbia).

However, Brazil began to have more spaces in the offensive field with the physical exhaustion of Switzerland, and in a moment of display of individual technical quality, Vinícius Júnior finally crossed from the left and Casemiro hit it first, with a great goal, to define the victory.

The early qualification and the first place in the group will certainly guarantee that Brazil rests many of the main players against the Cameroon selection. However, Brazil has not yet reached the performance level of a contender for the world title.

The first match on this matchday was one of the best so far at this World Cup, with a 3-3 draw between Cameroon and Serbia.

The main news before the whistle started was the removal of the main goalkeeper Onana after a discussion with coach Rigobert Song. According to the local press, the style of play was the reason for the disagreement.

On the other side, Serbia had Kostic return on the left wing, leaving Milinkovic-Savic more advanced, with Maksimovic alongside Lukic.

The first half made clear the disagreement in Cameroon. Goalkeeper Epassy used long shots on the way out, while Onana opted for short passes.

With the attackers approaching and a show by Tadic, Mitrovic, Kostic, Milinkovic-Savic, Zivkovic and Mitrovic, Serbia opened 3-1 ahead on the scoreboard. However, the impact of Aboubakar’s entry was immediate and Rigobert Song’s risk in launching four attackers was effective with Cameroon’s draw.