The Brazilian ace is looking for a move away from West Ham United. 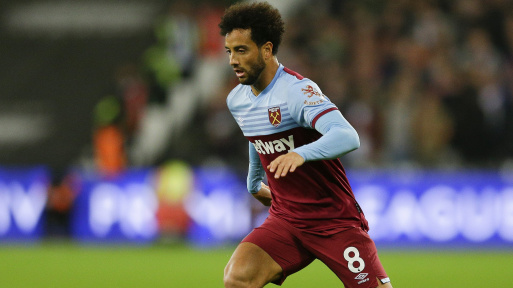 Arsenal have reportedly been offered the chance to sign West Ham United midfielder Felipe Anderson. The Brazilian is said to be keen on a move away from Hammers and could be available for £5m on loan. It is also added that the Gunners manager Mikel Arteta is a big fan of the Brazilian and would like to bring him on loan. Likewise, Arsenal’s transfer chief Edu, who is also from Brazil, is said to be an admirer of Anderson.

Hammers are looking to get rid of the Brazilian so that they can make way for the summer target Said Benrahma, who has been on Arsenal’s radar for a while. The Brentford winger is a highly exciting talent and would cost West Ham around £30m. Hammers believe they can only generate funds from the sales of their players.

Anderson has a contract running until 2022 but Hammers are keen on letting him off the hook. The 27-year-old moved to London Stadium in 2018 and he was an instant success in his first season, scoring 9 goals in the Premier League. Anderson suffered a dip in the next season, finding the nets only once. Besides, he was absent for the majority of games post the COVID break.

Earlier it was reported that Anderson has been contemplating a move to his former club Lazio as he found himself unimportant under David Moyes, who replaced Manuel Pellegrini last December.

Elsewhere, Arsenal are continuing their rebuild work as Mike Arteta looks to be in high spirits after winning both FA Cup and Community Shield. Willian and Gabriel Magalhaes have been the new signings thus far while Gunners have been linked a plethora of players in the transfer window.

Arteta also understood to be working hard to add a midfielder, with the priority turning out to be Dani Ceballos. Thomas Partey and Houssem Aouar are some of the midfield targets while first-team players like Matteo Guendouzi, Ainsley Maitland – Niles are expected to be on their way out this summer.

It remains to be seen whether Arsenal could opt for a signing like Felipe Anderson, who Hammers rate around £40m. Furthermore, his form has declined in the previous season, which makes him not the best fit for Arteta’s side.

The Spanish manager has been faring so well in the transfer this window but should not be hindered by the idea to sign a player like Anderson.