The Rossoneri look to have won the race for the Italian midfielder. 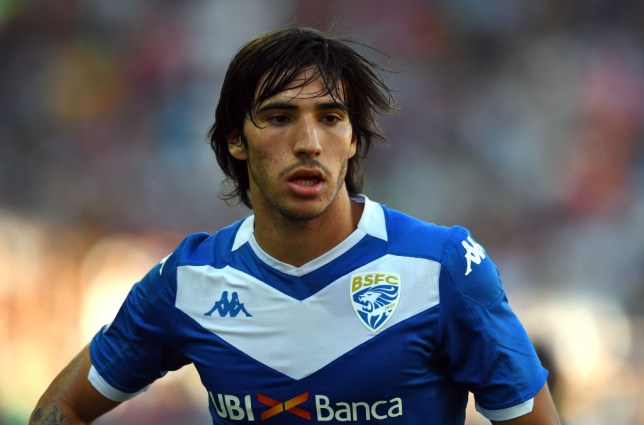 AC Milan have reportedly won the race for the young Brescia midfielder Sandro Tonali. The Rossoneri fought tooth and nail for the signing of the Italian youngster, who was said to be followed by a host of European heavyweights. AC Milan’s arch-rivals Inter, in particular, were also interested in recruiting him, but Tonali appears to have chosen the red side of San Siro.

However, Brescia President stated that Tonali resisted the offers from both Manchester United and FC Barcelona.

“We also had interest from Barcelona and Manchester United, but the lad is in love with Milan and went crazy once he heard of their offer, because he supports them.”

Cellino also spoke about how close Inter were to sign the Italian prodigy.

I know that [Inter CEO] Beppe Marotta really wanted Tonali and that [Inter head coach] Antonio Conte appreciated him, so I think his agent had agreed terms with Inter.”

“He was determined and convinced that he was going to Inter, but all this time dragged on and it was practically the start of the new season with still nothing happening.

Cellino also revealed that Tonali being a fan of Milan in the early days made him change his mind.

“As soon as Milan showed real interest, he did not want to listen to any other options. I also have a historically good rapport with Milan and we reached an agreement with [Milan technical director] Paolo Maldini quite quickly.

The 20-year-old is said to be joining the Rossoneri on an initial loan while he is up for the grab permanently for around £15m.

The fee looks a bargain for Milan as Cellino confirmed that they had offers worth £65m from Man Utd and Barca.

Sandro Tonali made his debut with the Italian national team last year and has appeared to have secured his spot. He has been a regular for Brescia side since 2017 but the former season saw him rack up a goal and seven assists to his name. His side endured a lacklustre season, but it couldn’t prevent him from getting the spotlight.

Furthermore, he has often drawn comparisons with legendary midfielder Andrea Pirlo for his style of play. However, the current Juventus manager has stated that Tonali is a better player than he ever was.