Arsenal are interested in signing Borussia Dortmund playmaker Julian Brandt and would have to just pay £17.5million to acquire his services in the summer. 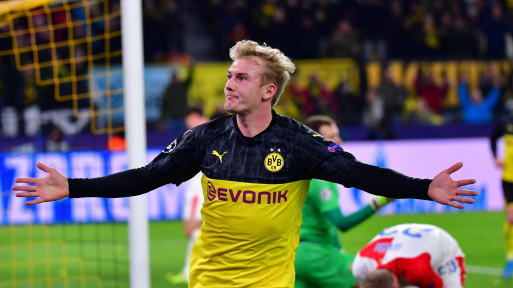 Julian Brandt, 24, joined Borussia Dortmund in the summer of 2019 after helping Bayer Leverkusen secure a Champions League qualifying third round spot for next season. The Germany international enjoyed a fine debut campaign at Signal Iduna Park, registering seven goals and 13 assists in 42 appearances across all competitions. However, it hasn’t been plain sailing for Brandt this campaign as he’s struggled to play regularly.

Even though the playmaker has played 40 times in all formats so far, he has started only 16 out of 28 Bundesliga games for Borussia Dortmund, who are fighting hard to qualify for the Champions League next season under interim head coach Edin Terzic. Brandt has apparently accepted that he needs to leave Dortmund to enjoy the regular game time, with Arsenal ready to offer him that this summer.

The Gunners, following a dismal start to the season, find themselves 10th in the Premier League table. They are 12 points off fourth-place Chelsea after the completion of round 33 in the English top-flight, which means the north London are likely to miss out again on the Champions League.

Arteta’s Arsenal signed Willian, Gabriel Magalhaes and Thomas Partey at the end of last summer, while Martin Odegaard arrived on loan from Real Madrid in January.

Martin Odegaard has hit the ground running in the Premier League, adding creativity and flair to Arsenal’s attack which looked listless and devoid of energy for the first half of the season. The Norwegian has linked well with the likes of Bukayo Saka, Emile Smith Rowe and Alexandre Lacazette in a short span of time and delivered some eye-catching performances, especially against Tottenham and West Ham.

Impressed with the 22-year-old’s performances, Arteta wants to keep Odegaard around for at least another year as the Spanish tactician’s preference is to sign him permanently from Real Madrid this summer. However, Real Madrid are not willing to sell their talented playmaker to the Gunners, as the Los Blancos view him as a vital part of the first team in the future.

Is Julian Brandt a good alternative to Odegaard?

The news of Real Madrid keen to keep hold of Odegaard should come as a blow to Arsenal, who must now look elsewhere for a creative player. That being said, Dortmund’s creative midfielder Julian Brandt, who is heavily linked with Arsenal, would be a good alternative to Odegaard.

Brandt is a gifted technician on the ball and can cause all kinds of problems to the opponent’s defence. He also has experience at the international level after earning 35 caps for the German national team, scoring three goals. At Arsenal, the 24-year-old can become a key player to support Pierre-Emerick Aubameyang and Alexandre Lacazette up front, whilst solving one of Arteta’s major problems next term.

At just £17.5million, Brandt could turn out to be a brilliant long-term signing for Arsenal.