Another round of English Premier League is behind us, meaning it’s time to look at what has happened this weekend, which teams impressed, which underperformed and which outright disappointed with what they have shown. Of course, we cannot forget about those teams, who were slightly lucky to claim a victory, and while the so-called luck is a part of any football game, it’s hard to guess where it stops.

Aston Villa and Liverpool meet on Saturday, November 2, at Villa Park, where they produced a thrilling bout, which will not be easily forgotten. The match started with an early goal from Trezeguet, who got Aston Villa in a 1:0 lead in the 21st minute, which ended up being the only goal of the first half. In the first half alone, Liverpool held on to the ball for 76% of the time and shot the ball 1/5. Aston Villa on the other side had only 24% ball possession but shot fairly better with 2/4. Unlike the first half which saw Aston Villa produce a solid resistance against Klopp’s men, Liverpool completely dominated the second half. With 72% ball possession and 5/20 shooting, Liverpool proved to be far superior to Aston Villa who failed to produce a single shot on goal with their 28% ball possession. Soon after the second half started, it was clear Aston Villa were doing their best to keep the score at 1:0 and it all seemed like they will be successful at it. Liverpool failed to find their way to the goal and even when they got an open look, the Reds couldn’t find the net. As the minutes slowly started to run out, the pressure was on Liverpool to do something.

And after countless failed attempts, Liverpool finally found a way to break Aston Villa’s defence in 87th minute, when Sadio Mane made an incredible inside pass, where he found Robertson who scored his first league goal of the season, which levelled the match at 1:1. But Liverpool were not happy with only one point and decided to make one last push, which earned them a spectacular goal in 90’+4, when Mane scored a goal with his head, adding to the assist he made only seven minutes earlier. With that, Liverpool claimed their 10th win of the season and managed to keep their unbeaten run alive, even though it seemed like it will come to an end at Villa Park.

Man City keeping up the pace, with Liverpool

Manchester City suffered a similar story to what Liverpool experienced, however in a much less dramatic way. In the Sky Blues’ clash with Southampton, Guardiola’s men went behind in the 13th minute, when Ward-Prowse scored a goal for the visitors, which got them ahead. Surprisingly enough, Man City failed to respond to that goal despite producing 14 goal attempts while holding onto the ball for 72% of the time in the first half. That said, the hosts turned their jet engines in the second half, where they completely outclassed the visiting team.

Guardiola’s men ended the second half with 80% ball possession and shot the ball 4/12, while Southampton held onto the ball for 20% of the time and failed to produce a single shot on goal. Suffice to say, Manchester City scored a goal, and while it came fairly late (70th minute), it was enough to give them momentum to push for the second, which came in 86th minute. With that, Man City turned the game around in barely 16 minutes and deservingly walked away with all three points. By claiming their eighth win of the season, Man City managed to keep up the pace with Liverpool, who are still six points ahead of City and eight ahead of third-placed Leicester and Chelsea.

By now it’s not a shock anymore to see Tottenham and Man United disappoint on the field seeing, how they are in a disastrous form this term. Manchester United added their fourth defeat of the season this weekend against Bournemouth (1:0), while Tottenham drew with Everton (1:0) on Sunday, meaning that bout marked their fourth consecutive match without a win. As it stands now, Man United and Tottenham both share the same 3-4-4 record and 13 points, which ties them at 10th spot in the league with Wolves and West Ham.

Arsenal on the other side played their second draw in a row this weekend at Emirates Stadium, where they had to work hard against Wolverhampton who managed to chip away points from the Gunners with a 76th-minute goal. With that, Arsenal remain at fifth place in the league with a 4-5-2 record and 17 points. 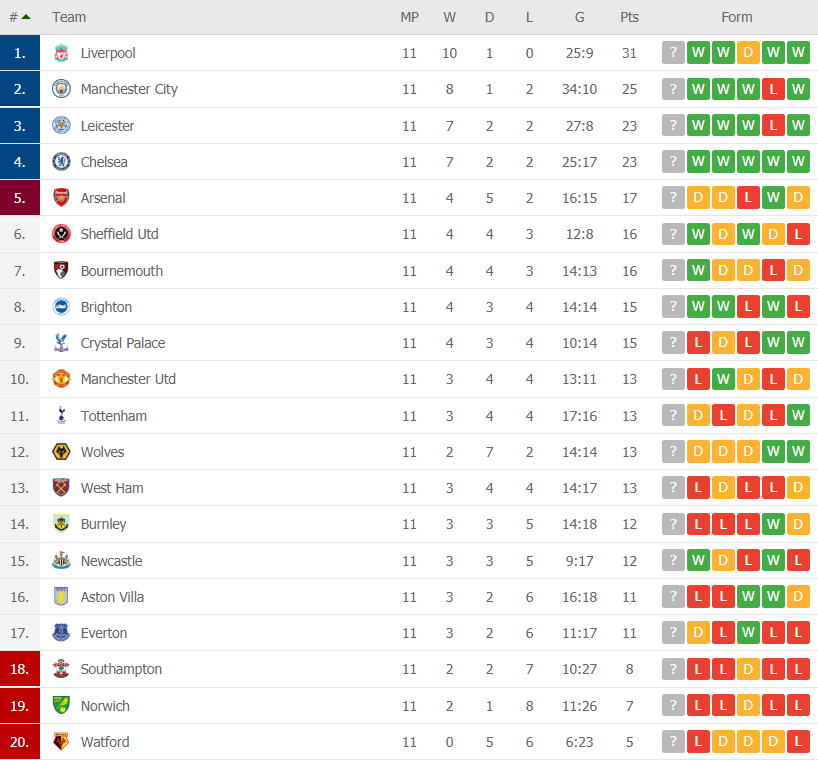 Looking at the league standings, Liverpool remain at the top with a 10-1-0 record and 31 points, followed by Man City with an 8-1-2 record and 25 points. Tied at third we have Leicester and Chelsea, who share the same 7-2-2 record and 23 points. Fifth in the league are Arsenal with 4-5-2 record and 17 points, while Sheffield United and Bournemouth sit tied at sixth with 4-4-3 record and 16 points.