Another round of LaLiga is behind us and with it, we were served with yet another weekend of thrilling matches, that reshuffled the teams at the top of the league. The main culprits for that were Real Madrid and Barcelona who failed to live up to the expectations, which opened the doors for other teams to catch up.

Barcelona record their third defeat of the season

Barcelona managed to get themselves in a lead after Granada and Real Madrid dropped points in the last rounds. Granada dropped points against Getafe in round 11, while Real Madrid failed to impress in GW 9 with a defeat (1:0) Mallorca. That said, the Blaugrana dropped points this round with a disastrous performance against Levante, who crushed the reigning LaLiga champion in a 3:1 spectacle. With that, Barcelona are now tied with both Real Madrid and Real Sociedad at the top of the table.

Looking at Barcelona’s fixture against Levante, it was anything that you wouldn’t expect to see. Barcelona were the stronger side in the first half with a 66% ball possession and 5/6 shooting. That said, their only goal came in the 38th minute when Messi scored a penalty. Levante on the other side mustered only three-goal attempts with no shots on goal with their 34% ball possession and no goals came out of that.

The second half was far more interesting and exciting to watch, as Levante managed to retaliate against the visitors with a superb performance in the attack. Despite holding onto the ball for only 34% of the time, Levante managed to shoot the ball 3/6. Barcelona on the other side shot the ball very poorly (1/3), which made them anything but threatening in Levante’s side of the pitch. With better performance in the attack, Levante managed to equalize the match in 61st minute, and surprisingly enough added their second only two minutes later, meaning they got in a lead by the time 63rd minute rolled around. However, Barcelona’s nightmare did not stop there as they went down 3:1 in 66th minute, when Radoja scored his first goal of the season. Two goals down, Barcelona pushed with all their might to catch up to the home side, but to no avail. The match ended 3:1 for Levante, who managed to turn around the match in less than six minutes. With that, Barcelona lost their third match of the season, which ended their seven-game winning streak across all competitions.

Real Madrid‘s struggles continued in GW11 when they dropped points against Betis in a humiliating stalemate at Estadio Santiago Bernabéu. How exactly Real Madrid failed to win on that day is anyone’s guess seeing how they were the dominant side. But despite having 63% ball possession, and shooting the ball 7/22, the Los Blancos failed to find the net. A lot of credit for Betis’ great performance goes to their goalkeeper who played perfectly on that night making more than a handful of spectacular saves. But it was not only Real Madrid, who were dangerous in the attack. Betis had a few chances to score a goal. In fact, they were far more dangerous than what you would have expected. In total Betis produced 13 shots, three of which were shots on goal. Unfortunately for them, Courtois was on top of his game that night, preventing Real Madrid from losing a match they should have won in the first place.  The match ended 0:0, with a total of 35 shots from both teams combined. It would be safe to say it was an exciting fixture, yet with a disappointing result for the home side.

Atletico Madrid draw their sixth, while Granada lost their second in a row

Two teams who were threatening the top spots in the league failed to impress in GW11. Atletico Madrid drew their sixth game of the season against Sevilla, while Granada dropped their second in a row against Real Sociedad.

The Atletico Madrid’s clash with Sevilla was overshadowed by Costa’s missed penalty in 72nd minute when the teams were tied at 1:1, which ultimately lost Atl. Madrid a chance to bounce back and secure their sixth win of the season. Furthermore, a win here would catapult Atl. Madrid to the top of the table, where they would be one point above Barcelona, Real Madrid and Real Sociedad. However, luck was not on their side that night, as they disappointed once more and are now hoping for better results as the get ready for a clash against Espanyol in round 12. Granada on the other side started their descent from the top of the league with their second defeat in a row, this time against Real Sociedad, who won the game in the dying moments of the match. The decisive goal came in 89th minute, which broke the tie and gave Real Sociedad a hard-fought win (1:2). With that, Granada fell to sixth place in the league, while Real Sociedad found themselves tied with Barcelona and Real Madrid at the top of the league. 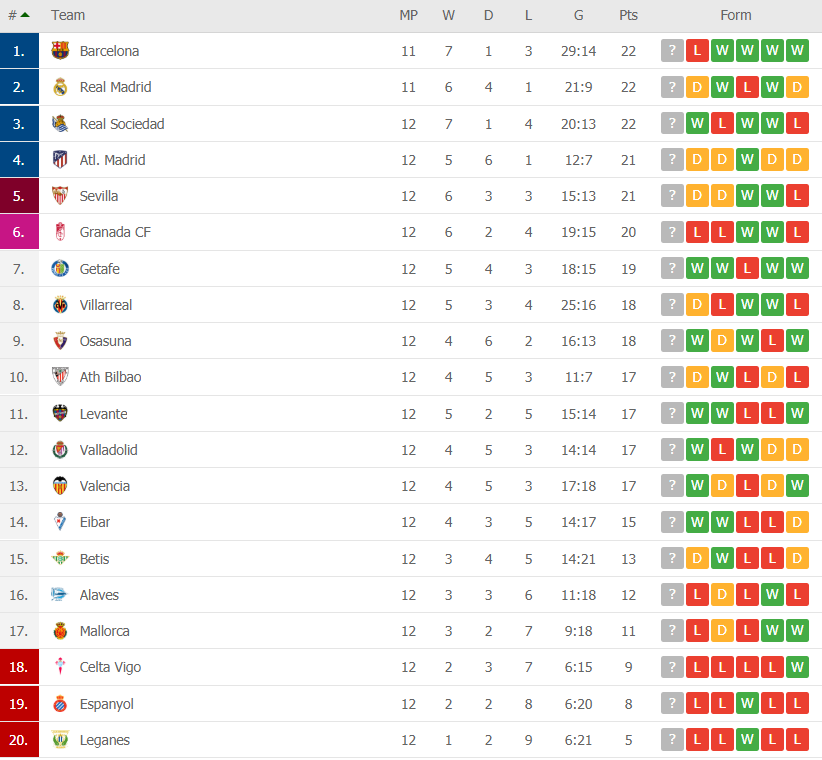