Round 11 of LaLiga has come to a close and with it, we got to see Barcelona and Real Madrid overtake Granada, who have failed to perform up to par against Getafe. Will Granada manage to bounce back and reclaim the leading position is anyone’s guess, but considering both Real Madrid and Barcelona have one game in hand, it’s safe to say Granada have a tough task ahead of them as they continue their impressive 2019/20 campaign.

We have talked about Granada before and until they remain among the top six in the league, or even in the top part of it, we will continue doing so. As newcomers to the league, Granada were expected to struggle to keep their boat afloat in LaLiga, but the reality was completely different. Not only did Granada prove they can dance with the top dogs, they managed to keep themselves among the elite LaLiga teams with a very strong start of the season. Last round they even went beyond all expectations, seeing how they claimed the leading position in the league, meaning they overtook everyone including the two LaLiga titans Real Madrid and Barcelona, who had to skip El Classico clash due to ongoing protests in Catalonia. That said, Granada dropped the ball on Thursday when they kneeled down to Getafe (1:3), which not only marked their third loss of the season but also cost them the leading spot on LaLiga standings.

Regarding the Getafe v Granada fixture, the teams seemed to be fairly equally matched, yet it was the home side who scored the opener in 35th minute, to which they added one more in the 41st minute, to claim a 2:0 lead prior to the half time mark. That should not come off as a surprise as Getafe were the stronger side in the opening 45 minutes. They held on to the ball for 49% of the time and shot the ball 2/7. Granada on the other side had slightly more possession of the ball (51%) but failed to impress with their attacking attempts, where they shot 0/2. Suffice to say they went down two goals and deservingly so. In the second half, Granada woke up and performed much better, with 63% ball possession, and shot the ball 2/8, while Getafe had the ball at their feet only 37% of the time and shot the ball 1/1. Despite being the dominant side, Granada managed to produce only one goal in the second half (74th minute) and on top of that also conceded their third in the dying moments of the match (88′), which sealed the deal for them. All things considered, Granada didn’t show enough on that day to make us believe they deserved a win and considering they failed to perform up to par with Getafe make us wonder if they have the needed quality to compete for top spots in the league. At this point, we can only wait and see whether Granada can rebound from that disappointing performance and continue pushing for the top-six finish, but it all seems like their strong start of the season just might be a fluke.

Due to El Classico being cancelled and moved to a later date, Barcelona and Real Madrid dropped down the standings, however, it’s not a reason for concern as they will make up for the lost match in December. That said, both sides still had a lot to prove after their less than impressive start of the season and it would be safe to say they did just that.

Barcelona completely decimated Valladolid (5:1) while Real Madrid showed no mercy to Leganes (5:0), who had to feel the wrath of frustrated Los Blancos. There is not a lot to be said about the two fixtures, as the score fairly reflects the balance of power in those bouts. The question now is whether the two Spanish giants can keep up the tempo, break themselves from the remained of the pack and fight their own battle at the top of the standings.

Atletico Madrid claim their fifth draw of the season

Atletico Madrid finished their round 11 fixture with yet another draw, continuing their subpar performance, which kept them from retaining the top spot in the league. While Simeone’s men remain one of the only two teams that have lost only one match so far, it’s hard to be too optimistic about their performances thus far. Holding onto a 5-5-1 record, Alt. Madrid have dropped points in five fixtures, four of which they should have won, but instead dropped the ball and claimed only one point. This week, Atleti failed to defeat Alaves, which was a disastrous performance, to say the least. The first half ended without a single goal and only one shot on goal from both sides combined. Surprisingly enough it was Alaves who were more dangerous in the attack with 1/4 shooting compared to Atl. Madrid’s 0/2. The second half, while much more action-packed did not end as many would have expected. Alaves produced held on the ball for 47% of the time and shot the ball 2/7. Atl. Madrid on the other side had the ball at their feet for 57% of the time and shot the ball 3/7. Madrid scored the opening goal of the match in the 70th minute but suffered a goal only 13 minutes later. While Alavaes entered the match as heavy underdogs, they fought well against the unorganized Atletico Madrid who failed to deliver once more. The final score was a fair representation of how the teams played, and we feel confident saying neither deserved to walk away victorious. 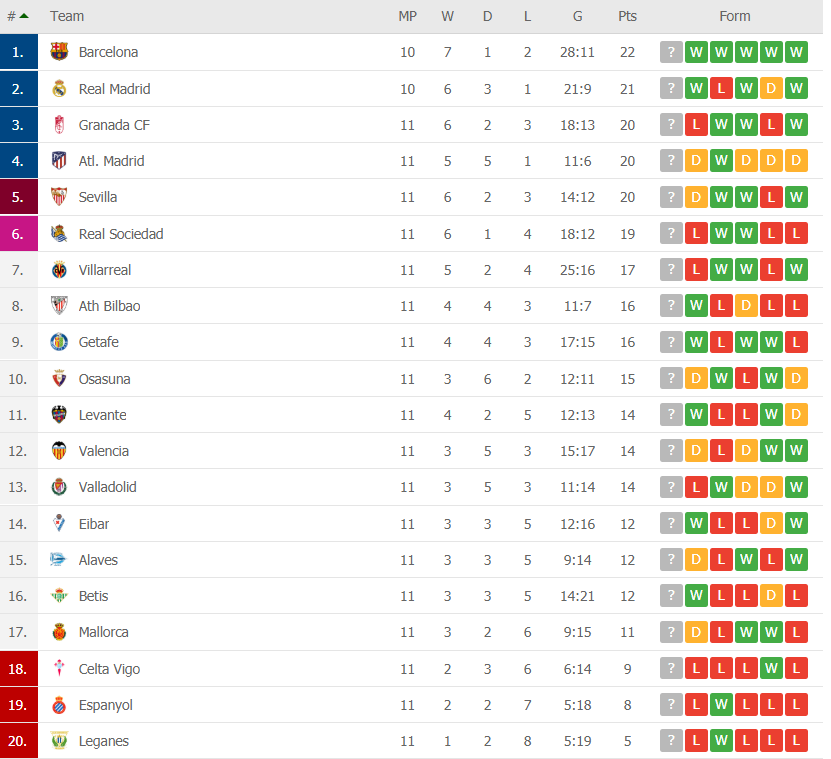 By dropping points once more, Atl Madrid again lost the chance to catch up to the top dogs of LaLiga and are now sitting tied with Granada and Sevilla at fourth place in the league with 5-5-1 record and 20 points. Granada are third with a 6-2-3 record, whereas Sevilla are fifth with 6-2-3 record next to their name. Barcelona lead the league with 7-1-2 record and 22 points and are closely followed by Real Madrid with 6-3-1 record and 21 points. Real Sociedad dropped points against Levante (1:2) and have now dropped down to the sixth place where they sit with 6-1-4 record and 19 points.