We are back with another preview of the EPL Fantasy game week and Fantasy EPL tips for GW 11. This time, we are focusing on gameweek 11, which will provide us with some exciting fixtures and hopefully solid results in our fantasy team. There are a couple of interesting fixtures on the menu, some of which offer us with great opportunity to bounce back from mediocre results in the last two gameweeks. So let’s not waste any more time and check out our fantasy team ahead of the 11th round of EPL. 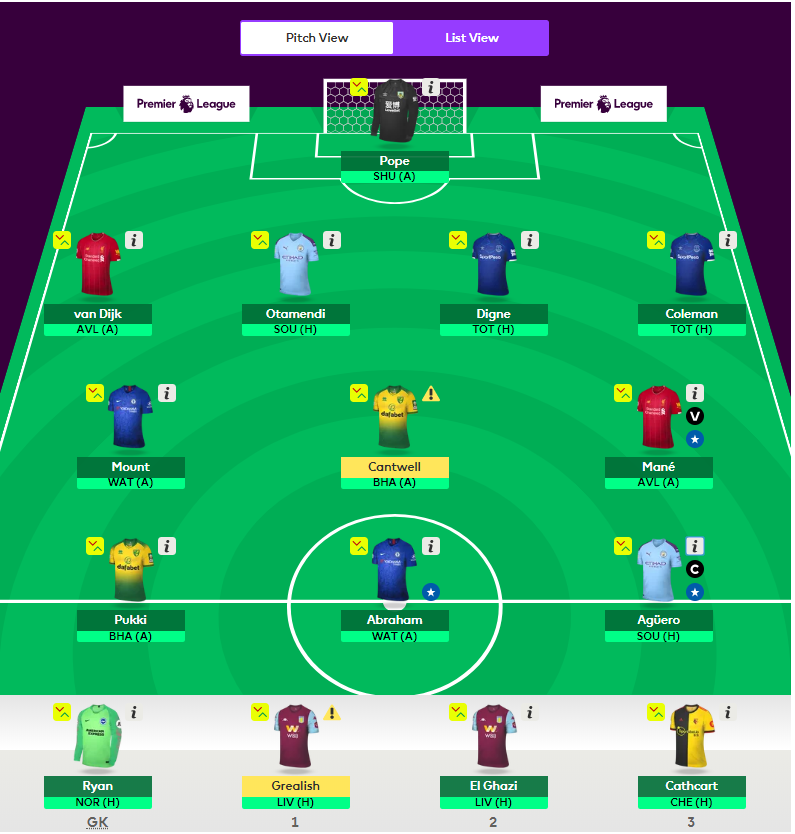 Our goalkeeper for this week will be Pope, who will face off against Sheffield United. While he has failed to impress in the last two weeks, where he combined only two points, we do believe he has the potential to deliver a nice result here. In addition, Ryan is facing against Norwich, and while the Canaries failed to impress with their performances in the attack in recent weeks, we have decided to keep our trust in Pukki for one more week, meaning picking Ryan here would be counter-productive.

In our defensive line-up, we will have van Dijk, Otamendi, Coleman and Digne. Van Dijk will face off against Aston Villa in what should be a match that will end in favour of the Reds. Not only do we count on Liverpool to keep a clean sheet here, but we can also hope for van Dijk to do some damage in the attack.

Joining him we have Otamendi, who was benched in the last two games for Man City. This week’s league cup game saw Otamendi start, which suggests Otamendi is in Guardiola’s first-team plans, but at the end of the day, you never know for sure if he will be included here or not. Nonetheless, we will keep him in the squad, hoping he will get to start in Man City’s match against Southampton. Digne is our third defender, and while we had our doubts about how well will Everton fare against Tottenham, the Spurs still have a lot to prove after their poor start of the season. Everton on the other side hold a solid home record and we would not be surprised if they can make something happen here. For the same reason, we included Coleman in our line-up.

Mount, Cantwell and Mane are our three midfielders for this gameweek.

Mount has been a very solid addition to our team and we can trust him to continue producing solid results as we go forward. This weekend, Chelsea will meet with Watford, who should not be too hard of an opponent for Lampard’s men. There is no a lot to add say about Mount and the reasoning behind our decision to pick him. He is always a threat and we will trust him to be one this Saturday as well. Cantwell is a player we have brought back to our team time and time again, and we are still waiting for him to show up and perform. That said, we are confident he and Pukki can make something happen this weekend. Mane as our third midfielder needs no introduction. He has been playing well so far into the season and there is no reason to believe that will change here. Liverpool will face Aston Villa, where we can expect him to earn us a nice chunk of points.

We are entering game week 11 with the same three players and the same expectations. Pukki, while failing to impress in last few weeks has managed to retain our trust. His numbers remain very solid, however, he seems like he is a bit unlucky he can’t find a goal. In our eyes, it’s only a matter of time before he starts to perform up to par again and we can only hope that will be this weekend. Abraham is our second striker, who is expected to do some damage against Watford. While he failed to score a goal in the last two, Abraham did produce an assist in Chelsea’s most recent fixture, making us believe he is involved in the attack enough for some nice return.

Aguero’s role in the midweek clash against Southampton did raise some concerns, however, we still fancy him for this game week. While we won’t know for sure, Aguero seems like he is likely to start over Jesus. The Argentinian striker still has the best minutes per xGl in the EPL over the last four gameweeks and considering the Sky Blues are facing Southampton, who have a terrible defence, we will trust Aguero to relight his fire and deliver this Saturday. He will also keep our captain armband.

In our substitutions, we have got Ryan, Grealish, El Ghazi, and Cathcart.

With that we have come to the end of our EPL Fantasy Gameweek 11 preview, which unveiled our fantasy team and our thinking process behind picking the starting XI. Looking at the team, we have put a lot of trust in Everton to deliver against Tottenham, but all things considered, we still see Tottenham can dominate here. In fact, it would not come off as a surprise if Everton ends up winning that bout. Our trust in Cantwell and Pukki to deliver might come off as a surprise to some, and we can’t blame anyone. Neither have been too impressive in last few gameweeks. That said, Pukki still produces a high amount of shots, making him a threat in each fixture he appears in. Which leaves us to believe it’s only a matter of time before he starts scoring again and Cantwell will surely be the man who will help Pukki achieve just that.