Arturo Vidal has been strongly linked with Inter Milan, after his struggles while playing at Camp Nou and while Vidal insists he is happy with his stay in Spain, there are strong speculations he could opt to leave for Inter, where he could reunite with his former coach Antonio Conte. 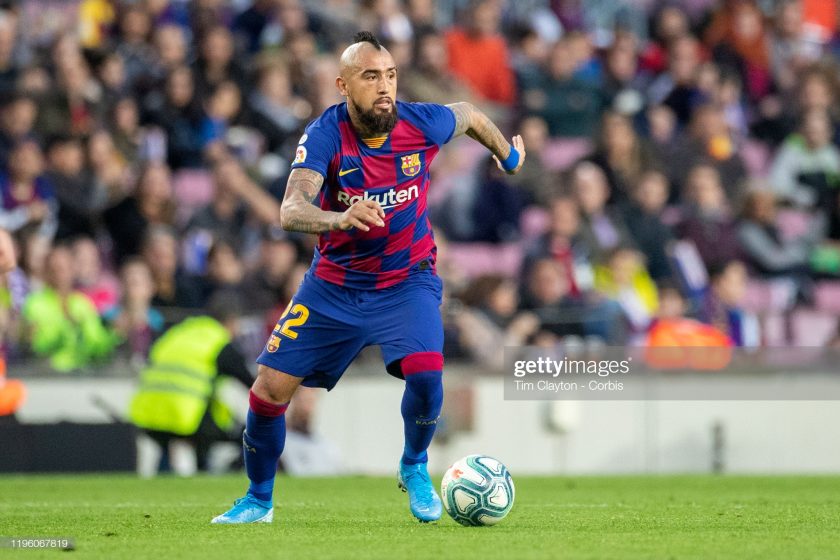 Arturo Vidal has a very fruitful career behind him, having played for Colo-Colo between 2005-2007 before he joined Bayern Leverkusen where he played for four years. During his time in Germany, Vidal has proven his worth and soon earned a tag as one of the best players in the world. In 2011 he got picked up by Juventus, where he remained for four years. During his stay in Serie A, Vidal won four Serie A titles, Coppa Italia, Suppercoppa Italiana and finished second in UEFA Champions League in 2014/15. He was won a reward as the Juventus player of the year in 2012/13 and earned a spot in Serie A team of the year in 2012/13 and 203/14.

His incredible achievements in Italy did not go unnoticed by other football giants, which saw him move back to Germany, where he played for Bayern Munich between 2015-2018. There he won three Bundesliga titles, BFD Cup and DFL Supercup before he decided to leave for Barcelona in 2018.

Since he joined Barcelona, Arturo Vidal has slowly fallen out of the starting XI, which sparked rumours he could join Inter, where he would reunite with Conte. His struggles at Cap Nou are rather obvious, however, Vidal insists he is happy about his Barcelona future. That being said, he refuses to rule out a possible move to Inter in the next transfer window.

In October, Vidal stated he was not too happy with the fact he is a back-up player for Ernesto Valverde’s team, which led him to assess his options to move out if his role in the team will not change soon. There were even reports, Vidal stormed out of the training after he was told he will not be starting in Barcelona’s clash with Real Madrid, despite his impressive performance against Deportivo Alaves, which marked his only fourth start of the season.

With his position in the club seemingly not improving, people have already started linking Vidal to Inter, who are struggling this season with injuries in the midfield, meaning Vidal could be a perfect addition for Conte. The Italian coach even said he would be interested in signing the Chilean midfielder in the January transfer window, as he believes Vidal is an excellent player, having previously coached him in Juventus. That being said, Conte stated he will not rush in any decisions as of yet.

“My representative is who has to see that, but I’m calm and happy at Barcelona. When I return, we’ll see. Now I want to be with my family, and after that return and take a decision,” said Vidal before the Christmas break.

“I’m not the one who makes the decision to play or not – that’s the coach. But people see that, so that makes me calm, and I’ll continue taking advantage of all my opportunities and continue scoring, which is what I like to do. I hope to lift the trophies that lie ahead of us at the end of the season.”

While it seems like Vidal is happy with playing for Barcelona, his lack of serious playtime has left him to dishearten and while it seems he is confident with his future at the Blaugrana, the recent events suggest he just might be left with no other option than to leave, if he wishes to re-launch his career.

So far this season, Vidal only started in six games for Barcelona across all competitions. In total, he played 19 games, scored five goals and added one assist in the UCL. Despite his contributions to the team, however, it seems like Ernesto Valverde prefers to pick Sergio Busquets, Frenkie de Jong, Arthur and recently Ivan Rakitic over Vidal in the midfield.

Talking about the future of Barcelona midfielders, there are some doubts over Rakitic’s future as well. That being said, Barcelona stated they will be only willing to sell the Croat if a solid offer comes from another club, as the Blaugrana still believe he is an exceptional player and a crucial member of the team.