Round 19 of English Premier League is behind us meaning it’s once again time to look over how our team performed last week, where did we go right and where did we go wrong, which players performed up to par with the expectations and which underperformed. So without further ado let’s take a look at what happened, but before we dig deep into our team, we will first check the Fantasy EPL GW 19 dream team. 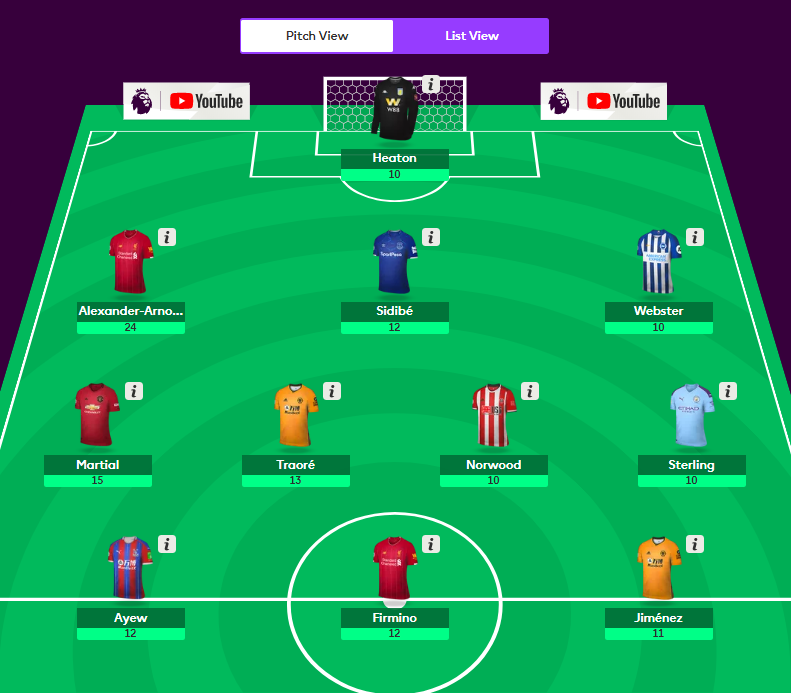 In the goal of the GW19 dream team we have Tom Heaton (10) who has impressed with his performance for Aston Villa against Norwich. He has earned season-high 10 points with a clean sheet and five saves, making him the best goalkeeper of the week.

Trent Alexander-Arnold (24), Djibril Sidibé (12) and Adam Webster (10) are the three defenders who have found their way into the dream team with their incredible performances. While all three played well, it was the Liverpool defender who took all the spotlight. Trent Alexander-Arnold ended the game week 19 with 24 points to his name, which was the highest total points out of all players in GW 19 and by far his highest score of the season. Alexander-Arnold scored his second goal of the season against Leicester and added three assists. He also managed to keep a clean sheet and earned three bonus points. Suffice to say he was just phenomenal and will look to repeat his success next game week, when Liverpool faces off against Wolverhampton. Sidibé contributed an assist and helped Everton keep a clean sheet against Burnley last week, which earned him season-high 12 points, while Webster scored a goal against Tottenham last week, which was his third of the season. He ended the match with 10 points, which was also his season-high in points.

Martial (15), Traore (12), Norwood (10) and Sterling (10) are the four midfielders who have found their way into the dream team. Martial scored twice for Man Utd last round to earn season-high 15 points, Traore contributed a goal and an assist in Wolverhampton’s win over Man City, which earned him 13 points, while Norwood scored his first goal of the season against Watford to clinch season-high 10 points. Sterling scored the only two goals for Man City in their defeat against Wolves, which earned him 10 points, which is a solid outcome, yet we can be sure he expected to see a better result from his team.

Ayew (12), Firmino (12) and Jimenez (11) are the three strikers who have made their way into the dream team. Ayew scored his fifth goal of the season and added his first assist of the season against West Ham last week to help Crystal Palace win 2:1. For his performance, he earned 12 points, which is his season-high as of now. Standing next to him we have Firmino, who scored twice for Liverpool in their win over Leicester. For that, he also earned 12 points, which is his tied-best result of the season, having previously earned 12 in round four of EPL. Last but not least, Jimenez earned 11 points with an assist and a goal against Manchester City. It was his eighth goal and sixth assist of the season, and his best performance of the year, having previously earned 10 points in round eight.

In total the dream team of GW18 earned 139 points, which is 15 more compared to last week.

Now let’s take a look at our Fantasy EPL team. 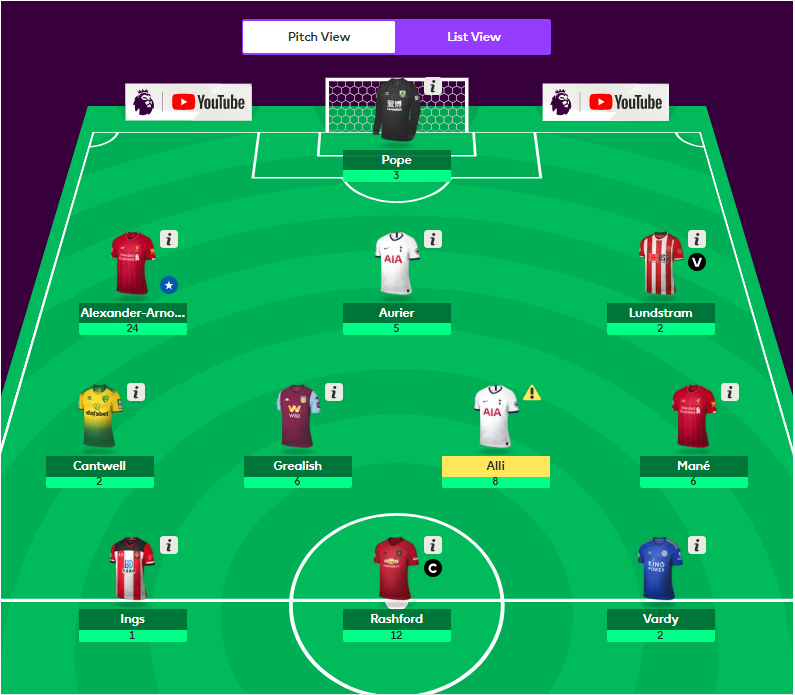 It was a great week for our defenders, mostly for Trent Alexander-Arnold (24) who went above and beyond all expectations to end the round with 24 points to his name. He has scored a goal and added three assists, which made him the key man in Liverpool’s win over Leicester. It was by far his best week of the season and we will be hoping he can keep up the pace heading into week 20.

Next to him we have Aurier (5) and Lundstram (2), who combined only seven points. Aurier contributed an assist for Tottenham last week, but unfortunately failed to keep a clean sheet. He also failed to earn any bonus points, which earned him a total of five points. Lundstram on the other side had one of the worst weeks of 2019/20 season, where he earned only two points. He failed to produce anything noteworthy as he did not earn any bonus points nor did he help his team in the attack.

Cantwell ended his week with only two points which were slightly underwhelming seeing how he ended GW 18 with 10. That being said, we are satisfied with Grealish who played well against Norwich and contributed an assist, which earned him six points. Alli scored his sixth goal of the season against Brighton and earned eight points which was a solid result, considering he has earned two and one point in the last two weeks respectively. Mane as out fourth and last midfielder scored barely six points with his assist against Leicester. While a solid outcome, we did expect more from him, but at the end of the day, he made a solid contribution to our team.

Our trio of Ings (1), Rashford (12) and Vardy (2) earned 15 points, which was slightly underwhelming to say the least.

Ings failed to recapture his form as he failed to score last round, however, we have to consider he did play for only 21 minutes. Vardy on the other side played for all 90 minutes against Liverpool but failed to find his way to the net, neither did he contribute an assist, meaning it was his first match since round six that he has not scored a goal or contributed an assist for his team. Suffice to say we were not too satisfied with what he has shown. Rashford on the other side managed to squeeze in a goal against Newcastle, which earned him six points, and because he was our captain, we ended up with 12 points from him.

In-game week 19 our team combined 71 points, mostly thanks to Trent Alexander-Arnold and his 24 points, which means we ended another game week with more than 60 points. GW19 also ended with nine more points compared to GW 18 meaning we can’t be too sad about our final outcome. As it seems our team has been putting up solid results as of late and we will count on them to continue with their performances.

We missed the gameweek 20, so the next Fantasy tips will be published earlier.