We did not have very high expectations for this game week mostly because two of our star players – Mane and Alexander-Arnold did not play in the EPL due to Liverpool’s obligations in the FIFA Club World Cup. That being said, we got pleasantly surprised as the rest of our team delivered with some excellent work, earning us an impressive amount of points. Now let’s take a look at how GW18 went for our team, but before we do so, first we need to look over the dream team of this past competitive week. 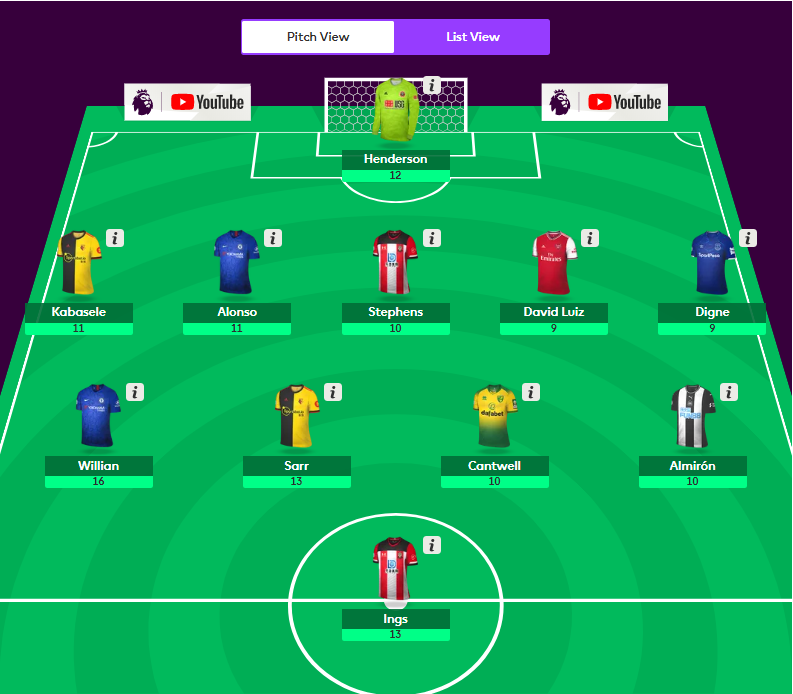 This past game week saw Dean Henderson (12) put up a performance of the season when he and Sheffield United clashed with Brighton. In the said match, Henderson put up two saves, kept his goal untouched and even passed for an assist for the only goal of the match. He earned 12 points for his performance, which is by far his highest point tally of the season, having previously earned nine in gameweek two. Joining him in the back were five defenders – Kabasele (11), Alonso (11), Stephens (10), David Luiz (9) and Digne (9).

Kabasele impressed with his performance in Watford’s clash with Manchester United, where the Hornets produced one of the biggest upset wins of the season. Kabasele played a pivotal role in their win by not only helping his team keep a clean sheet but also passed for an assist and with that earned 11 points, which is his season highest score. Alonso saw the same success in Chelsea’s clash with Tottenham, where he booked his third assist of the season and earned 11 points. Unlike the other two defenders, Stephens did not pass for an assist in Southampton’s win over Aston Villa but rather scored a goal, which was his first of the season. He earned 10 points, which was by far the best result of the season, having previously earned four points in game week 16. David Luiz helped Arsenal to a point against Everton, where he made sure his goal remained untouched and earned three bonus points and with that earned nine points. Digne was involved in the same fixture, where he as well made sure Everton’s goal remained untouched on top of earning three bonus points, to end the GW18 with nine points to his name.

In the midfield, we have Willian (16), Sarr (13), Cantwell (10) and Almiron (10). Willian put up another impressive performance in Chelsea versus Tottenham clash, where he played a pivotal role in Chelsea’s win with two goals to his name. By scoring two goals, he has earned his season-high 16 points. Sarr was involved in Watford’s win over Manchester United where he scored a goal and added an assist, and with that also played a crucial role in his team’s win. With that, he earned his season-high 13 points. Cantwell earned 10 points with a very solid performance against Wolverhampton. He scored his fifth goal of the season and had three bonus points. Last but not least, Almiron helped Newcastle defeat Crystal Palace by scoring the only goal of the game. He as well earned 10 points, which is his best result of the season.

In the attack, we have only one player – Ings (13), who scored twice in Southampton’s win over Aston Villa. He is now at 11 goals on the season and 99 total points. His performance last week was also his best of the season, improving his previous record of nine points he earned in GW15, GW14, GW9 and GW7.

In total the dream team of GW18 earned 124 points, which is 3 less compared to last week.

Now let’s take a look at our team and how it stacked up with the dreamteam. 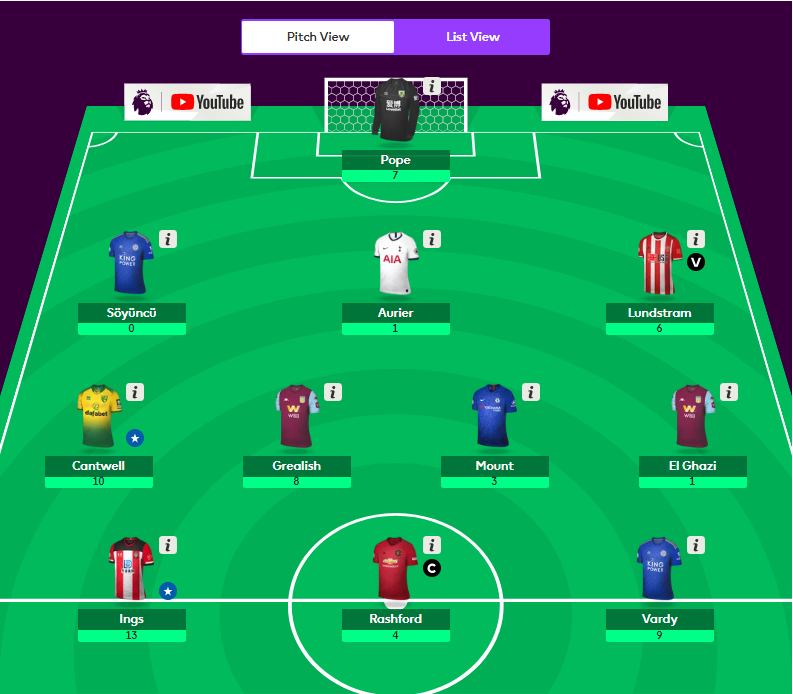 We opted to pick Pope (7) for GW18 and it proved to be a solid decision. He earned seven points in Burnley’s meeting with Bournemouth, where Pope kept a clean sheet and added one bonus point. Our substitute, Ryan claimed only two points this game week after conceding a goal against Sheffield Utd.

Söyüncü (0), Aurier (1) and Lundstram (6) combined for only seven points this game week, which is far below what we expected. Söyüncü did not impress with what he has shown against Manchester City, where Leicester conceded three goals, thus resulting in Söyüncü earning zero points. Aurier had a similar experience in Tottenham’s loss to Chelsea, where he conceded two goals and earned only one point. On a more positive note, Lundstram played well against Brighton as he managed to help his team win 1:0, thus earned six points.

Cantwell (10), Grealish (8), Mount (3) and El Ghazi (1) combined 22 points, which is a solid result in our book. Out of the four, we got pleasantly surprised by Cantwell, who impressed with his performance last week. After a streak of poor results, he seemingly found his stride and scored his fifth goal of the season and while it was not enough for Norwich to defeat Wolves, he has tied his season-high 10 points, meaning he is currently at 71 points for this season.

Grealish was another pleasant surprise, as he scored a goal against Southampton, which helped him earn eight points. While that was not enough for Aston Villa to win, his contribution to our team was very solid. Mount, as our third midfielder put up underwhelming three points, which was below our expectations, yet we can’t argue too much. El Ghazi on the other side earned only one point in Aston Villa’s defeat against Southampton, which was another underwhelming performance from him, especially considering he previously contributed quite a few points to our team.

Our strikers had quite an interesting experience this game week. Ings (13) was just phenomenal with his two goals, which earned him a spot in the dream team, unfortunately, the same can’t be said for Rashford (4). We have added the Manchester United striker, hoping he will deliver in his clash with Watford and even passed him the captain armband, but he severely underperformed as he earned only two points, which doubled earned us four points. Vardy (9), on the other side, scored a goal his 17th goal of the season against Manchester City which earned him nine points. It was another solid performance form him, but unfortunately, we opted to not give him the captain armband, which cost us seven points.

All in all, our team earned 62 points, which is a very solid result in our books, yet we believe the final result could have been much higher. The decision of making Rashford our captain proved to be a wrong one, however, we can’t blame ourselves too much as it was an upset defeat that was the cause for that. Other than that, we are happy Cantwell stepped up and contributed 10 points. If we draw a line, it was a very solid game week for our team, especially considering we were missing Mane and Alexander-Arnold and we will hope we can keep our streak alive heading into next competitive week.

Our Fantasy EPL Table after GW 18 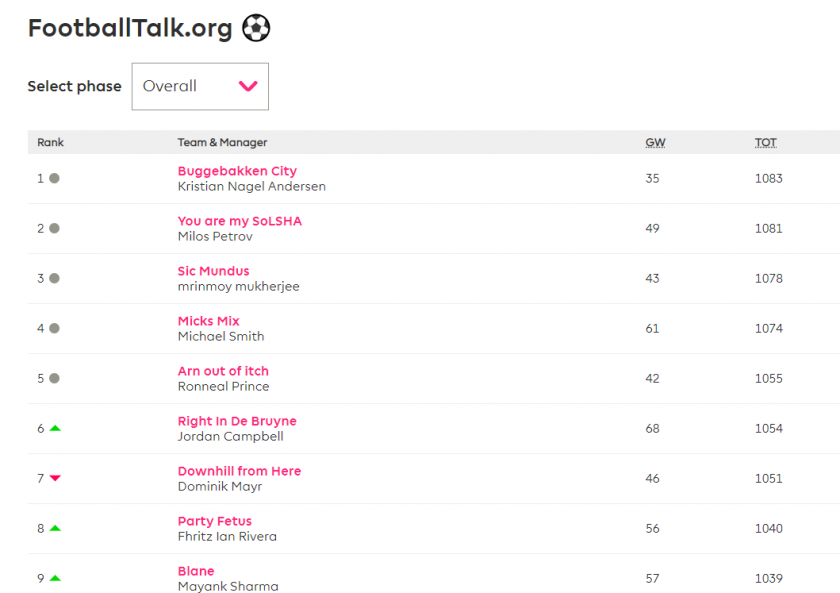 Kristian and his team still stand at the top of our Fantasy EPL, but the difference between the 1st and 4th teams are less than 3 points, so it will be even more interesting. The best in this round in our FPL was July DG and his team “Generic Team Name” that produced 71 points. His decision to make Ings captain was amazing and he got 26 points only from him. Well done, July.

Starting from 26th December until 2nd January 2020 there will be 3 rounds (3 rounds in less than a week!), so you will have to be careful because many head coaches will rotate their players and some standard players could be benched in some of the next games.