Another English Premier League game week is behind us, so it’s time for us to dig deep into what happened, what the results in the Fantasy league show and ultimately how our team performed. But as always, we will start by looking at the best-performing players of the week or in other words the game week dream team. 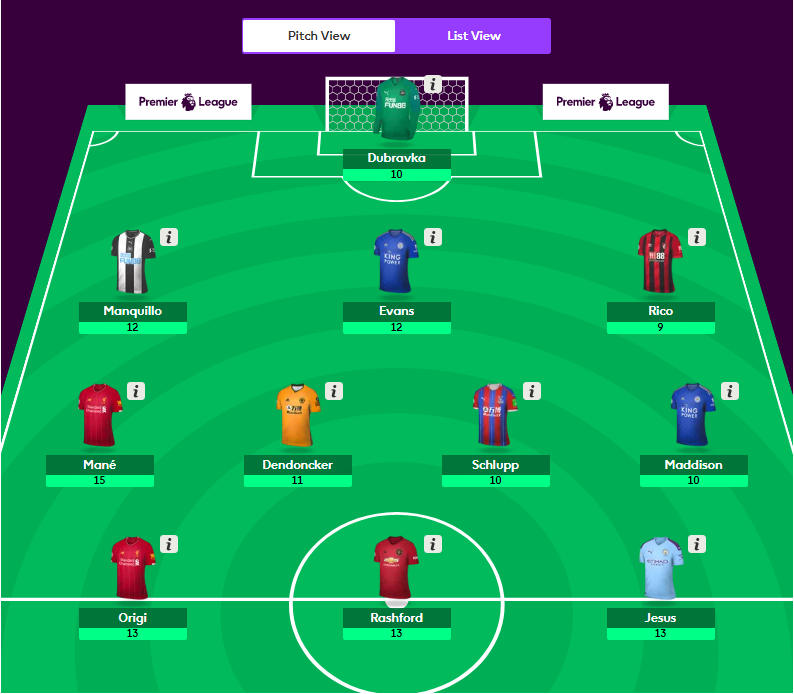 Martin Dubravka (10) finished round 15 of FPL as the top-rated goalkeeper with 10 points, which he earned in Newcastle’s bout with Sheffield United (2:0), where he earned his fourth clean sheet of the season and put up six saves. Joining him in the back, we have Manquillo (12), Evans (12) and Rico (9). Manquillo, Dubravka’s teammate ended fixture against Sheffield Utd with an assist and a clean sheet which earned him the season-high 12 points. Evans impressed with his performance for Leicester with his second assist of the season. Adding to that, he also helped Leicester keep a clean sheet, meaning he earned a total of 12 points, which was his season-high and a huge improvement compared to his last seven rounds. Rico is the third and the last defender on the dream team with nine points to his name. He failed to help Bournemouth defeat Crystal Palace but put up a very solid display in defence. While he did not score a goal nor did he add an assist, Rico earned three bonus points, which was enough to break into the dream team.

In the midfield, we have Mane (15), Dendoncker (11), Schlupp (10) and Maddison (10). Mane was once more the man of the match for Liverpool with his two assists and a goal against Everton. Denconcker on the other side scored his first goal of the season for Wolves against West Ham United (1:0) and helped his team keep a clean sheet, which earned him 11 points. Schlupp earned season-high 10 points with a goal for Crystal Palace against Bournemouth (1:0). Maddison as well earned 10 points with a goal against Watford. It was his fifth goal of the season and his tied-best performance iso far.

In the attack, we have Origi (13), Rashford (13) and Jesus (13). Origi scored twice in Liverpool’s thrashing of Everton (5:2), Rashford scored twice against Tottenham to sink Mourinho’s ship, while Jesus contributed two goals in Man City’s win over Burnley.

In total the dream team of GW15 earned 128 points, which is five less compared to last week.

Now let’s take a look at how our team did. 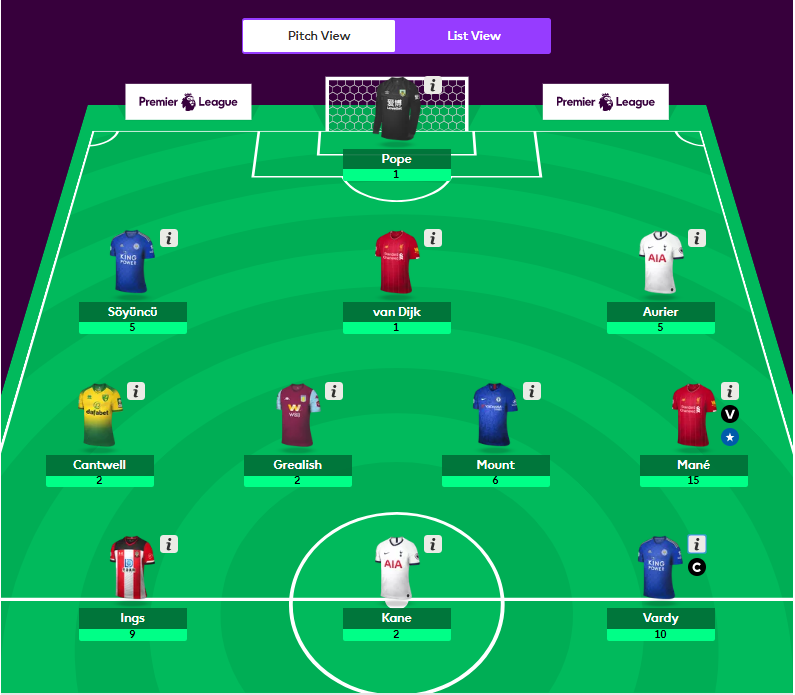 Our goalkeeper Pope (1) failed to live up to the expectations, but to be completely fair, we did not have high expectations for him to begin with. He finished his GW15 with only one point after conceding four goals against Manchester City. Our substitute – Ryan, on the other side ended the week with three points, meaning we might have picked the wrong goalkeeper to represent our team this week.

Our defenders Söyüncü (5), van Dijk (1) and Aurier (5) brought us a grand total of 11 points, which is far from expected. Söyüncü was involved in Leicester’s win over Watford, yet he only managed to earn five points for keeping a clean sheet. Not really a groundbreaking performance from him, yet still a solid outcome in our eyes. Van Dijk on the other side ended the week with only one point which is a shocking result, considering he earned 17 last round. Aurier as our last defender ended the week with five points, which again is not anything shocking, yet far from what we had hoped we would receive from him. It is worth noting he contributed an assist, but conceded two goals, which prevented him from earning more points this week.

Our midfield, which consists of Cantwell (2), Grealish (2), Mount (6) and Mane (15) produced 25 points, which is a solid result, yet we did expect more points from Cantwell and Grealish, seeing how they both contributed only two apiece. Mount impressed with a goal against Aston Villa, which earned him six points – his highest since round eight when he scored seven. Mane as out the last midfielder scored 15 points with two assists and a goal in Liverpool’s win over Everton. Unfortunately, we did not have him as a captain, which cost us some nice bonus points.

Ings (9), Kane (2) and Vardy (10) combined 21 points, which was a solid effort from our trio. Ings earned nine points with a goal against Watford, Kane disappointed with no goals nor assists in Tottenham’s defeat against Manchester United, while Vardy did manage to score a goal in Leicester’s win over Watford. His performance earned him five points, but because he was our captain, Vardy contributed 10 points to our team.

Our team accumulated a grand total of 58 points, which was two points less as compared to last week, yet still a very solid result. We did make a mistake of not putting Mane for our captain here, but I guess that’s how the cookie crumbles. The whole team delivered, and while we did expect more from Kane and van Dijk especially, we can’t be too critical, seeing how we had a very solid outcome. That being said, the next round of EPL is just around the corner, so there is no time to focus on what has happened, but rather look ahead and try to make a plan which would continue our run of solid results in round 16.