Just as round 15 of EPL came to a close, we are already entering round 16, meaning it’s time for us to provide our preview of our fantasy team, what we have changed in our lineup and our expectations for the upcoming game week. So without further ado, let’s look at how our fantasy EPL team will look like heading into the next round and we give you some Fantasy EPL tips for this gameweek. 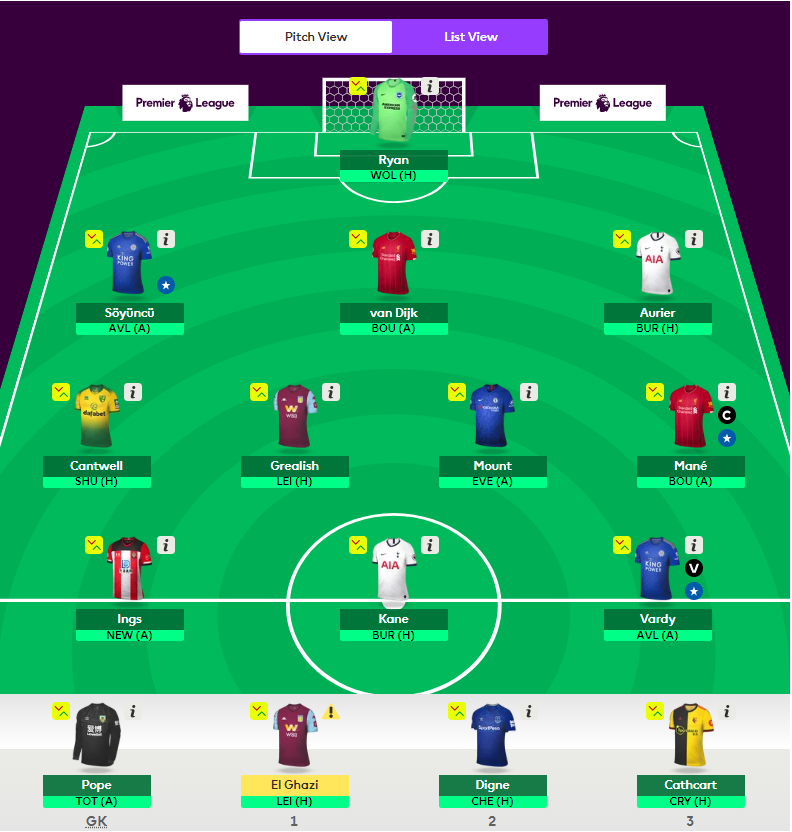 After deciding to sit out Ryan in round 15, we have decided to include him into our lineup for round 15. Pope has failed to impress against Man City where he earned only one point, and we don’t believe he will be able to impress next week, when Burnley faces off with Tottenham, who will be hungry for points to bounce back after a crushing 1:2 defeat against Man United. Ryan and Brighton on the other side will play host to Wolves, which should be a much closer fixture and should Ryan perform as he did against Arsenal, we can expect some solid points.

No changes in our defensive lineup for round 16. We will keep our trust in van Dijk, Söyüncü and Aurier to deliver. Söyüncü and Leicester will face off with Aston Villa in what should be a fairly easy match for the Foxes to win and while we are not counting on Söyüncü to score a goal nor to add an assist, we will gladly accept if he manages to do so against Villa, who do not boast with the most solid defence in the league. Van Dijk failed to impress last round, but that just might change in round 16, when Liverpool clashes with Bournemouth.

Bournemouth, while a solid team when it comes to scoring goals should have a much harder time making anything happen against Liverpool and we will trust van Dijk to deliver with a strong performance. Aurier as our third and last defender will help Tottenham in their meeting with Burnley, where we can expect him to earn some nice points. He has already contributed two assists in his last three fixtures and we would not be surprised if he does it again.

Just like it was the case for our defenders, we also decided to field the same four midfielders as we did in last round, meaning we will be looking at Cantwell, Grealish, Mount and Mane.

Cantwell has been seemingly on the rise and if he can recapture his form from round 13 and 14 when he scored two goals, we can expect him to do some damage against Sheffield United. For Grealish, we had some doubts about whether we should include him or not, but decided to take a shot with him to make something happen against Leicester. Mount and Mane are our last two midfielders, and two players we expect the most from.

Mount scored a goal last round against Aston Villa and we will hope he can do the same against the struggling Everton, who dropped down to the bottom of the league with their subpar performances. Mane on the other side needs no special introduction. He has been just phenomenal in recent weeks and with a goal and two assists behind him, we can safely assume he will do some damage against Bournemouth as well. For that reason, we will pass the captain armband to him for this game week and hope for some nice bonus points.

Just like it was the case in our midfield and defence, we have decided to field the same trio of strikers for the upcoming game week. Ings will clash with Newcastle, where we expect at least a goal from him, if not more. Kane on the other side has a proving to do, following his rather underwhelming results in recent weeks. That being said, Tottenham’s clash with Burnley just might prove to be a great chance for him to get back on track and start producing goals. Vardy, as our last striker has scored at least one goal in the last seven consecutive fixtures, and there is no reason to believe he will stop against Aston Villa. All in all, we expect some great things from our strikers this game week, and we will hope we won’t end up disappointed.

In our substitutions, we have got Pope, El Ghazi, Digne and Cathcart.

With that, we have come to an end of our Fantasy GW16 preview, where we introduced our team and our expectations. While we did not make any changes to our lineup compared to last week, with the sole exception of the goalkeeper, we are confident this lineup is best suited to bring home some nice points. Will that be the case is anyone’s guess, but until the game week starts, we will never know for sure.