Round 15 of the English Premier League is behind us and what around it was. From high scoring matches to upset wins and some more expected results, the previous round simply had it all and we are here to look over what exactly happened.

Liverpool flex their muscles against Everton

At this point, it’s kind of redundant to talk about Liverpool and their wins, yet we can’t ignore the Reds’ superb display on Wednesday when they crushed Everton at Anfield in a seven-goal thriller.

Liverpool entered their clash with Everton as heavy favourites and it’s not hard to see why. Klopp’s men have been a force to be reckoned with throughout the season and while they had some iffy displays, Liverpool are still undisputed top dogs of the EPL, which they proved once more as they trashed Everton 5:3. In regards to the said fixture, Liverpool stepped on the pitch with all guns blazing and needed only six minutes to score the opening goal of the night. With the help of Mane, Origi scored in the sixth minute, to which Shaqiri added another only 11 minutes later. Two goals up, Liverpool seemingly dropped their guard and conceded a goal in 21st minute, at which point it became clear we are in for one exciting fixture and that is exactly what we got. Everton pushed for an equalizer but instead conceded their third in 31st minute when Origi scored his second of the day. Mane added his name on the scoresheet in 45th minute, pushing Liverpool 4:1 up. That said, Everton did not give up and scored their second in 45’+3, meaning the teams entered the second half two goals apart (4:2).

The second half was much calmer in comparison to the opening 45 minutes and while both sides pushed for a goal, the only goal of the second half came in the final minute of the match when Winjaldum scored his second league goal of the season. The match ended with 5:2 in favour of the hosts, who proved to be the stronger team throughout. Liverpool ended the match with 59% ball possession, 11 goal attempts and five shots on goal, while Everton shot the ball 4/12 with 41% ball possession. While we could have expected Liverpool to produce more shots on goal, we can’t complain about their 100% conversion rate. With that, Liverpool cemented themselves at the top of the league with 14-1-0 record and 43 points. Everton on the other side dropped down to the relegation zone where they sit with 4-2-9 record and 14 points on the year.

Much like their EPL title rivals, Liverpool, Man City put up a show in round 15, when they completely trashed Burnley at Turf Moor with a dominant 1:4 win to keep up the pace with Liverpool.

Guardiola’s men entered the fixture as heavy favourites and they did not need long to justify that tag. In 24th minute Gabriel Jesus scored the game opener and got his team into a lead. That was also the only goal of the first half which was surprising, seeing how Man City had 72% ball possession and shot the ball 5/8, while Burnley shot the ball 0/2 with only 28% ball possession. City managed to keep the momentum going in the second half, where they once more completely outplayed their opponents. The second goal of the match came in the 50th minute, when Jesus scored his second, followed by Rodri in 68th minute, who got City into a three-goal lead with solid 20 minutes to go. While it seemed like there would be no more goals on display, Mahrez decided he has other plans and scored the fourth goal of the night in the 87th minute. Burnley got their consolation goal in 89th minute when Brady scored his first goal of the season.

City ended the match with 76% ball possession, 17 goal attempts and eight shots on goal. Burnley on the other side walked off the pitch with underwhelming 24% ball possession, four-goal attempts and two shots on goal. Suffice to say, Man City were the superior side on that day and deserved to win with such a score. With that win, Man City climbed back to the third spot in the league, where they sit with a 10-2-3 record and 32 points, which puts them 11 points adrift of Liverpool. Burnley on the other side dropped down to 12th place where they sith with 5-3-7 on the year with 18 points, which is five short of top five.

Just as we thought Tottenham have found their stride, Mourinho suffered his first defeat since he took over the Spurs. While suffering a defeat is painful on its own, what made it even worse is that it was against his former employer – Manchester United. The match was a close one throughout, but it was the Red Devils who showed more. They opened the scoring in the sixth minute when Rashford got the hosts in a lead but suffered an equalizer in 39th minute when Alli got Tottenham back into the game. The second half saw only one goal and even that came from a penalty in 49th minute, which was successfully converted by Rashford. All in all, it was a close bout, yet it was the Red Devils who deserved to claim all three points. The hosts ended the match with 46% ball possession, 12 goal attempts and seven shots on goal, while Tottenham shot the ball 5/8 with 54% ball possession. 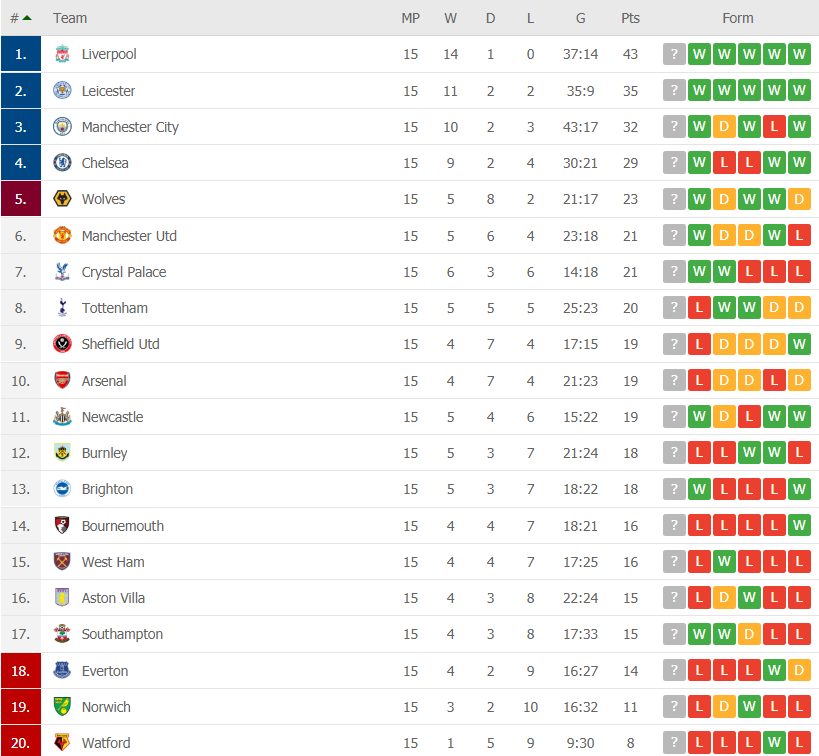 With round 15 of EPL behind us, the current standings show Liverpool holding strong at the top (14-1-0) with 43 points, followed by Leicester (11-2-2) with 35 points and Manchester City at third with (10-2-3) 32 points. Chelsea (9-2-4) dropped down to fourth after losing two in a row in round 13 and 14 and are not three points short of catching up to Man City. At fifth place, we have a surprise appearance in Wolverhampton (5-8-2), who have launched their climb to the top of the ladder after a disastrous start of the season. Other than that, Manchester United sit in sixth place with 5-6-4 on the year and 21 points. Tottenham are eighth with 5-5-5 record and 20 points, while Arsenal continue to struggle to find their rhythm as they sit at 10th place with 4-7-4 record and 19 points.