The curtains have dropped on yet another game week in the English Premier League, which once more served us with a handful of thrilling bouts, some of which ended as expected while others… not so much. The biggest talking point is, of course, Man City’s bout with Newcastle, which not only resulted in a humiliating draw for Guardiola and his men but also saw Liverpool increase the gap ahead of the Sky Blues who are not 11 points adrift of the number one spot in the league.

Defenders doing all the work for Liverpool

Liverpool secured their 13th win of the season this past weekend when they edged past Brighton thanks to no other than van Dijk and Alexander-Arnold, who not only did a solid job in the defence but also scored the only two goals of the match. The fixture started with Liverpool taking the reins of the first half into their own hands, producing six shots on goal out of 10 attempts with 49% ball possession. While Brighton managed to keep ahold of the ball for 51% of the time, they shot the ball rather poorly (1/4). The first goal of the match came in the 18th minute when van Dijk scored his second of the season. Six minuted later, he scored his second of the game to take his team two goals up. The man behind the pass that led to the two goals was Alexander-Arnold, meaning it was the two defenders who did all the work for the Reds in the opening 45 minutes. The second half was much slower and surprisingly enough, it was Brighton who produced slightly more. The visitors had 59% ball possession and shot the ball 4/8, while Liverpool produced only one shot on goal out of five attempts. That being said, the Reds defence held up and defended well against Brighton’s pressure. Unfortunately, Allison received a red card in 76th minute, leading to a goalkeeper substitution, meaning Adrian got a shot at playing. His debut for Liverpool, however, did not end the way he had hoped, seeing how he conceded a goal only a minute after stepping on the pitch. The game ended 2:1 in favour of the hosts, who won their 13th game of the season and are now eight points in the lead ahead of Leicester and 11 points ahead of Man City.

Just like in any season for the last couple of years, Man City entered the 2019/20 season with high ambitions to secure yet another EPL title, but as we are approaching round 15, their chances of doing so are becoming slimmer and slimmer. Ahead of round 14 of EPL, Man City were nine points short of reaching Liverpool and that gap further increased to 11 points after Liverpool defeated Brighton and Man City failed to defeat West Ham. Manchester City had their fair share of disappointing results this season, yet their performance in round 14 was possibly their worst display so far.

The Sky Blues entered their bout with West Ham as heavy favourites and managed to start off the match with a goal in 22nd minute to set themselves up nicely to win and claim all three points. Unfortunately, Guardiola’s men suffered a shocking goal only three minutes later, when Willems scored his second goal of 2019/20 season. With that, the two sides entered the second half 1-all, despite a far better performance from Man City, who produced four shots on goal out of nine attempts with 78% ball possession. Newcastle on the other side put up only two shots on goal out of three-goal attempts with 22% ball possession. In the second half, we saw Man City push even harder for a goal, shooting the ball 5/15 with 74% ball possession and while they completely dominated their opponents on the paper, they needed 82 minutes to score their second. By holding into a 2:1 lead with only eight minutes to go, Man City were well on their way to secure a win, but Shelvey had other plans. He took advantage of City’s moment of weakness and scored a goal in 88th minute, thus equalized the match with only two minutes to go, which did not give Man City enough time to come back from. The match ended with a shocking 2:2 draw, which meant Newcastle earned their fourth win of the season, while Man City “earned” their second draw of 2019/20 season. Drawing with Newcastle alone was a bad result, but seeing how both Leicester and Liverpool won their bouts only added salt to the wound. Man City are now third in league standings, three points behind Leicester and 11 points behind Liverpool, who are slowly but surely running away from the rest of the league to get themselves into a one-man title race.

Other than Liverpool’s win and Man City’s disappointing result, we also got to see Chelsea disappoint once more, as they lost their second fixture in a row this past round. After losing to Man City in round 13, Chelsea dropped points against West Ham (0:1). Tottenham on the other side have been improving since they appointed Mourinho and won their second in a row against Bournemouth (3:2). Arsenal put up yet another underwhelming result, as they draw with Norwich (2:2), meanwhile, Man United failed to defeat Aston Villa (2:2) and secured their sixth draw of the season. 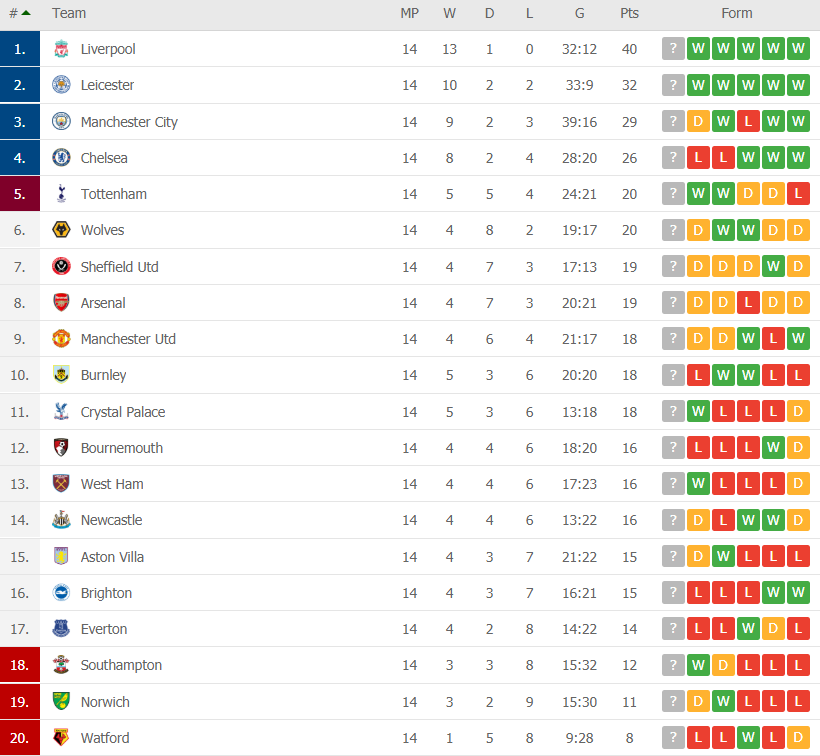 The standings after round 14 show Liverpool in a significant lead with 13-1-0 record and 40 points, which puts them eight points above second-placed Leicester (10-2-2) and 11 points ahead of Man City (9-2-3). Leicester City continued with the great results, so the while football community ask themselves can they repeat the 2015/16 season and win the Premier League. The fourth-placed team in the league are Chelsea (8-2-4), six points ahead of Tottenham (5-5-4) and Wolves (4-8-2) who are tied at fifth place. Arsenal (4-7-3) are sitting at eighth place in the league with an underwhelming  19 points, which sits them one point above Manchester United (4-6-4), who just like Gunners failed to impress so far this season. As it seems now, the 2019/20 EPL title is Liverpool’s to lose, yet we are not even mid-way through the season, meaning a lot can happen, as we have seen last season. Adding to that are some very iffy displays from Liverpool who were arguably a bit lucky in a handful of their matches, leading us to believe their bubble could burst any minute. Will that happen or will Liverpool pick up the pace is anyone’s guess and while we can only speculate at this point, we should get a definite answer in the next couple of rounds, which could make or break their title run.