We are back with tour EPL Fantasy game week recap, this time, focusing on FPL game week 14, which we ended with some solid numbers and will now look to keep the fire going into the next game week. But before we get too ahead of ourselves, let’s first take a look at what happened in round 14 of EPL. 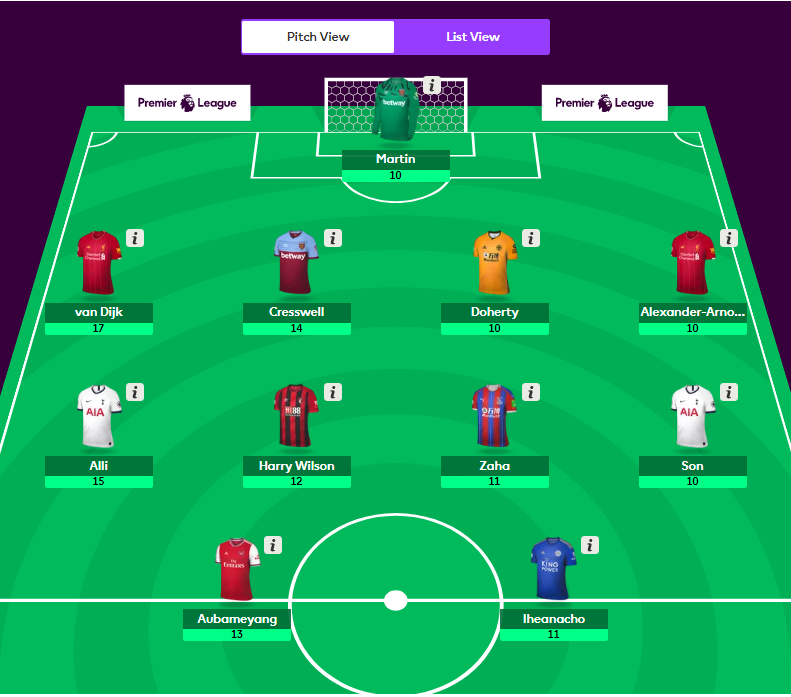 Starting off the GW 14 dream team, we have David Martin (10) in the goal, who put up a show of his life in his first EPL appearance of the season. His team, West Ham, clashed with Chelsea last round where they produced an upset 1:0 win, meaning Martin kept a clean sheet, to which he added six saves to claim his career-high 10 points. Joining him in the back, we have van Dijk (17), Cresswell (14), Doherty (10) and Alexander-Arnold (10).

Van Dijk put up a show of the season, when he scored two goals against Brighton last round, earning 17 points, which is the most out of any players in the dream team. Cresswell on the other side scored a goal against Chelsea, which helped West Ham produce an upset win against the Blues. With his goal, Cresswell tied his season-high in fantasy points, with 14 points to his name. Doherty, much like van Dijk and Cresswell also contributed a goal for his team in the previous round, which was his second goal of the season and earned him 10 points. Last but not least, we have Alexander-Arnold who ended his GW14 with two assists to his name and 10 points.

In the midfield, we have Alli (15), Harry Wilson (12), Zaha (11) and Son (10). Alli and Son were involved in a five-goal thriller against Bournemouth, where Alli scored two goals while Son produced two assists. The players earned 15 and 10 points respectively, which was Alli’s season-high in fantasy points. Harry Wilson stood on the other side of the pitch in that match and scored two goals, which earned him 12 points. Third and the last midfielder, who has earned a spot in the dream team is Zaha, who has woken up from his slumber and scored his second goal in two fixtures, which earned him a season-high 11 points.

Two strikers made their way into the dream team – Aubameyang (13) and Iheanacho (11). Aubameyang once again proved his worth with two goals against Norwich, while Iheanacho produced a standout performance in his debut for Leicester, where he scored a goal and added an assist to help him stem defeat Everton (2-1).

In total GW14 dream team earned 133 points, which is a 3-point increase compared to last week.

Now let’s look over our fantasy team and how our players performed. 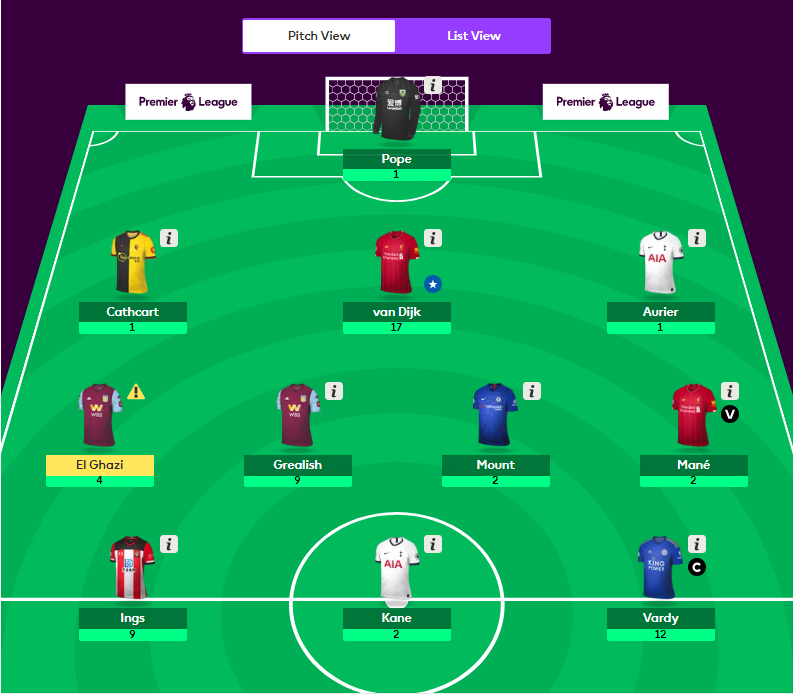 Our decision to pick Pope (1) did not pay off, seeing how he conceded two goals against Crystal Palace and made one save, which earned him an underwhelming one point. Our substitute goalkeeper – Ryan, who we decided to sit on our bench, however, earned two points.

Week after week our defence failed to impress, however, that changed in GW14, seeing how our three defenders – Cathcart (1), Aurier (1) and van Dijk (17) combined 19 points. While Cathcart’s performance against Southampton and Aurier’s against Bournemouth were nothing to be proud of, it was van Dijk who impressed with two goals for Liverpool against Brighton, which earned him season-high 17 points and we couldn’t be happier with what he has shown. Will he be able to do it again is anyone’s guess, but we will surely hope he can make us proud in the upcoming weeks.

We have put a lot of hope in our midfield and we can say it delivered… to a certain degree. Mount (2) and Mane (2), who we took for granted will produce some nice points failed in doing so. Mane did not score a goal nor did he add an assist to his record, and the same can be said for Mount, who saw his team kneel down to West Ham United. That being said, both Grealish (9) and El Ghazi (4) put up a solid performance against Manchester United. El Ghazi, walked away from the said fixture with an assist next to his name, despite playing for only 17 minutes. His teammate – Grealish, on the other side, scored his third goal of the season, which earned him a grand total of nine points, which is his second-best result of 2019/20. In total, our midfield produced 17 points, which is a solid result, yet we did expect some better displays from Mount and Mane.

Our trio up front – Ings (9), Kane (2) and Vardy (12) combined 23 points, which is a solid result in our eyes. Ings scored his seventh goal of the season against Watford which earned him nine points. Kane failed to get involved in one of the three goals Tottenham scored against Bournemouth, meaning he earned only two points, while Vardy put up a show and scored his 13th goal of the season against Everton, thus earning six points, which doubled earned us 12 points.

In total, we have accumulated 60 points this past game week, which is four more compared to game week 13. All things considered, we are fairly satisfied with our team and their performances, and while we did expect a bit more from Mane, Mount and even Kane, we can’t complain too much, seeing how van Dijk earned 17 points and even our two Aston Villa midfielders managed to step up and put up solid displays. We will hope for more weeks like this one, and quietly hoping for an even better result next round. 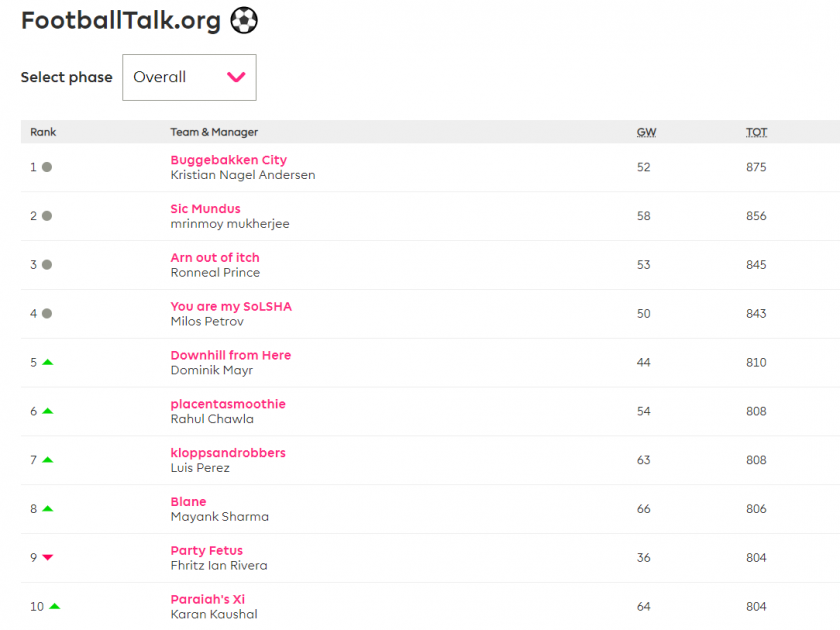 There are no big changes at the top of our Fantasy EPL after GW 14. Buggebakken City is still on the top with only 19 points more than 2nd Sic Mundus. All top 10 teams have more than 800 points which are great and guarantee interesting battles until the end.