It’s that time again for our EPL Fantasy game week recap, where we look over what has happened in the previous round of English Premier League, how the players performed and most importantly how our fantasy team did, which players impressed, and which underperformed. But before we do that, first to look at the best 11 players of gameweek 17 who made their way into the dream team. 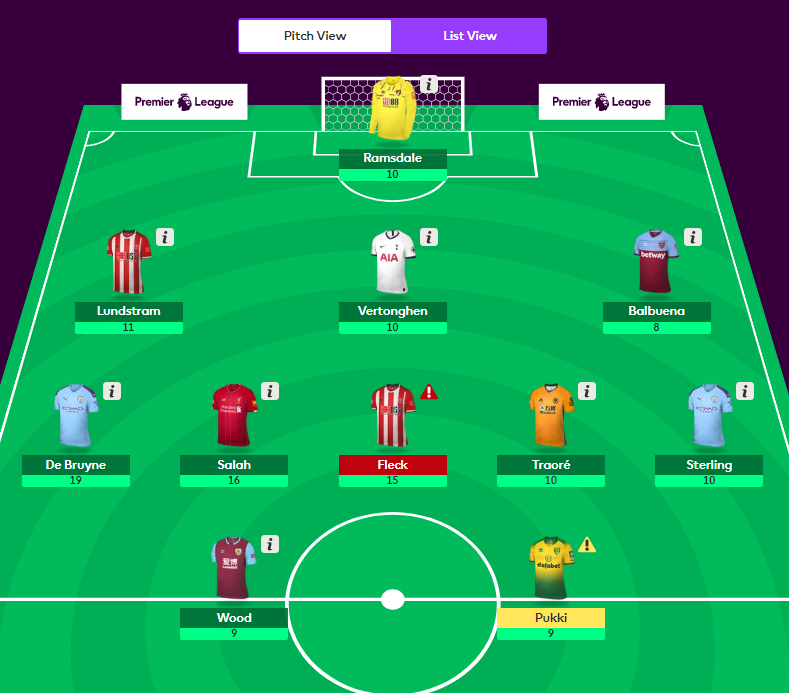 We got to see some surprising appearances in the Fantasy dream team this week alongside some returning players who have resurged in form and earned another appearance in the elite 11 players.

Starting off our list we have Ramsdale (10), who earned 10 points for his performance against Chelsea, where he helped his team earn a shock 0:1 win with five saves, and for that rightfully earned his spot among the best 11 players. Joining him we have Lundstram (11), Vertonghen (10) and Balbuena (8), who were the top three defenders of the week. Lundstram earned 11 points with his incredible display against Aston Villa where he not only helped his team keep a clean sheet but also contributed an assist which earned him his highest point tally since gameweek 11 when he earned 21. Vertonghen has recently found his form and added another solid run in last game week where he earned 10 points, to add to his 11 points in game week 16. He has been on the rise recently and while he did not get much playtime throughout the season since Mourinho took over Tottenham, Vertongen has been performing very well. Last but not least we have Fabián Balbuena who has earned season-high eight points with a solid performance for West Ham. While he did not score a goal nor did he contribute an assist, Balbuena made a solid effort in the defence to earn two bonus points.

In the midfield, we have De Bruyne (19), Salah (16), Fleck (15), Traore (10) and Sterling (10). Out of all the players last week, it was De Bruyne who shone the brightest with two goals and an assist in Man City’s win over Arsenal (3:0), which earned him his season-high 19 points. Salah, while slightly less efficient compared to De Bruyne, impressed with two goals for Liverpool in their bout with Watford (2:0). Fleck, as the third midfielder, was another surprise appearance in the dream team, but a well-deserved one seeing how he scored twice against Aston Villa to earn his season-high 15 points. Traore earned 10 points with a goal against Tottenham, while Sterling earned 10 by helping City defeat Arsenal with a goal, which marked his ninth of the season.

Only two strikers in the dream team this week, yet a very surprising lineup to say the least. Wood (9) scored his seventh goal of the season against Newcastle which earned him nine points. The second player, however, was Pukki (9), who has found his way back into the dream team after a long absence. He has recently found his form and scored three goals in the last four fixtures, with his last coming against Leicester, where he earned nine points, which is the most since round five when he earned 12 points.

In total the dream team of GW17 earned 127 points, which is 10 less compared to last week.

Now let’s look over our team. 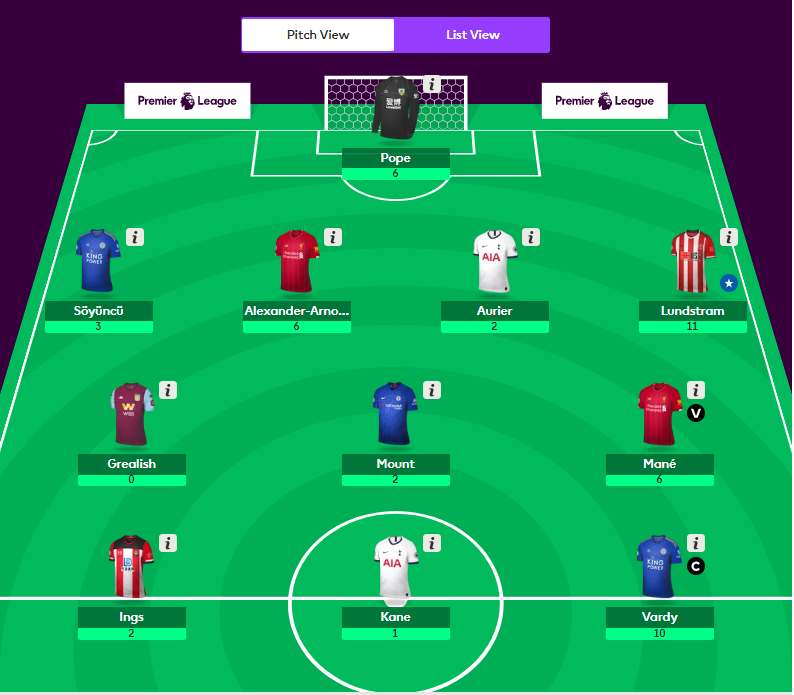 Picking Pope (6) for this week proved to be a good idea, seeing how he earned six points, which is three more compared to Ryan and only four short of reaching the dream team. However, there is not a lot to be said about Pope’s performance against Newcastle. He kept a clean sheet and did not score and bonus points. Nonetheless, solid performance and a solid amount of points for us.

Our defenders Söyüncü (3), Alexander–Arnold (6), Aurier (2) and Lundstram (11) earned a grand total of 22 points, which is a solid result in our books. While most of the work was on Lundstram and his superb display against Aston Villa, where he contributed an assist, we can’t criticise our other three defenders too much. Söyüncü was a bit unfortunate to see Leicester drop their match against Norwich, but results as such are bound to happen. Despite conceding a goal, he played well and we expect more from him going forward. Alexander-Arnold is another player who we are proud of based on what he has shown last week. While he did not score a goal nor did he contribute an assist to Liverpool, he still did a good job at preventing Watford from scoring a goal, and with that earned his seventh cleans sheet of the season and six points. Aurier on the other side was unfortunate to see Tottenham concede a goal against Wolverhampton, which saw him earn only two points.

Not a lot of positive things to say about our midfield. Grealish (0), Mount (2) and Mane (6) combined only eight points, which is disappointing, to say the least. Grealish earned zero points for conceding twice and missing a penalty, Mount failed to see much success in Chelsea’s defeat against Bournemouth, while Mane managed to make some noise last week with an assist which earned him six points, but we expected much more from him. All in all, underwhelming results from our midfielders.

Much like our midfield, our strikers failed to impress this game week. After scoring 50 points last week, our trio of Ings (2), Kane (1) and Vardy (10) combined only 13 points, which is a huge downgrade. Ings failed to score a goal in his match against Newcastle which ended his streak of five consecutive matches where he scored at least once. In total, he earned only two points, which is the lowest he scored since round 11. Kane was another player who disappointed, by earning only one point, which is a huge drop compared to his 16 points last week. His inability to score a goal paired with a yellow card left us a disastrous contribution to our team. Unlike Ings and Kane, Vardy managed to make some noise with an assist against Norwich, yet we expected much more from him considering he had six goals in his last five matches. All in all, he scored five points, which doubled earned us 10.

Our team earned a total of 49 points, which is not particularly bad, but a huge downgrade compared to our 77 points last week. While our defenders played well, we were not too happy with our midfield and attack, which failed to impress. Out of the two, however, it was our attack which disappointed the most considering all three players had fairly easy fixtures ahead but failed to capitalise on their chances. Despite all that, we are entering the next game week positive we can improve and hoping our players can avoid another such performance, which we hope was a one-time occurrence.

Our Fantasy EPL Table after GW 17 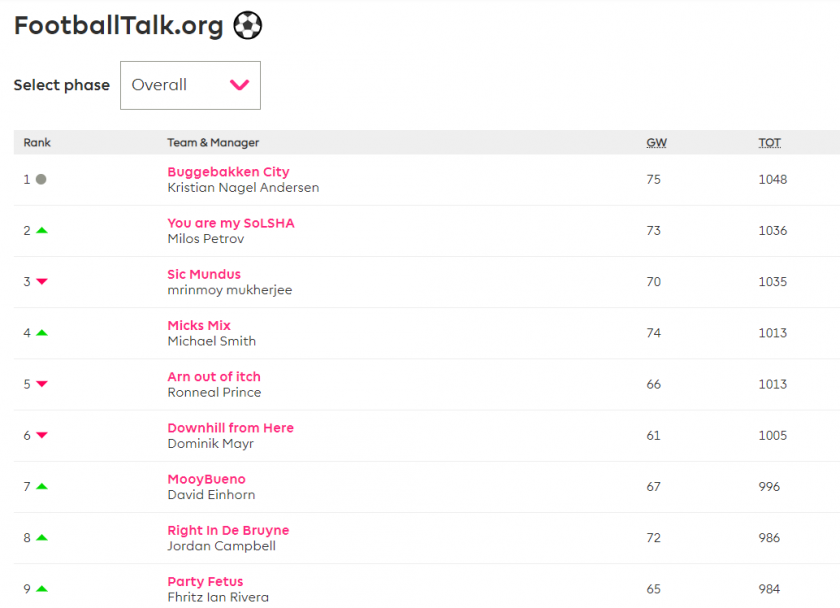 There are no big changes at the top of our Fantasy EPL. We have 6 teams who have more than 1000 points and they are the main favorites to win our fantasy league, but keep in mind that we are still on the halfway and there are many gameweeks left to play until the end of the season.