Another weekend is behind us, meaning it’s time to turn our focus on the English Premier League, how the round 11 went and most importantly how our fantasy team performed last week. But, as always we will first look over the Fantasy dream team for GW 11 i.e. the 11 top-performing players of the last gameweek. 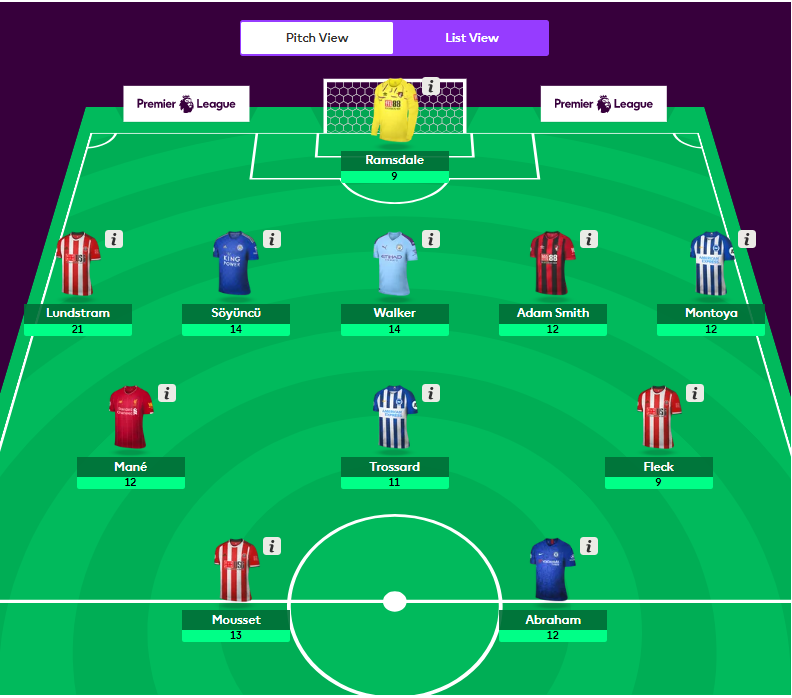 In the goal of the dream team for GW11, we have Aaron Ramsdale (9) who took a trip to Manchester, where Bournemouth produced an upset 0:1 win against the Red Devils. Ramsdale produced his third clean sheet and added four saves, which earned him nine points.

In the defence, we have John Lundstram (21), Walker (14), Adam Smith (12), Montoya (12) and Soyuncu (11). Lundstram impressed this GW with two goals and a clean sheet in Sheffield United’s bout with Burnley. Walker scored a goal and added an assist for Man City in their meeting with Southampton. Adam Smith produced his first assist of the season in Bournemouth’s trip to Manchester and earned 12 points, which is the same as Montoya, who contributed an assist in Brighton’s win over Norwich last weekend. Soyuncu earned 11 points with a goal for Leicester against Crystal Palace on top of keeping a clean sheet for the third time this season.

In the midfield, we have Mane (12), Trossard (11) and Fleck (9). Mane was the main man behind Liverpool’s 1:2 win against Aston Villa with an assist and a goal in the dying moments of the match, which saved Liverpool from a humiliating loss. Trossard earned 11 points with a goal and assist against Norwich, whereas Fleck earned nine points with a goal for Sheffield United against Burnley. In the attack, we have only two players. Mousset (13) and Abraham (12). Mousset impressed with his three assists against Burnley, which earned him season-high 13 points. Abraham on the other side scored a goal and added an assist in Chelsea’s (1:2) win over Watford on Saturday.

In total GW11 dream team earned 136 points, which is a significant decrease compared to last week (156), yet still, a very impressive number, considering there were no record-breaking results on display this weekend.

Now it’s time to look over our team. 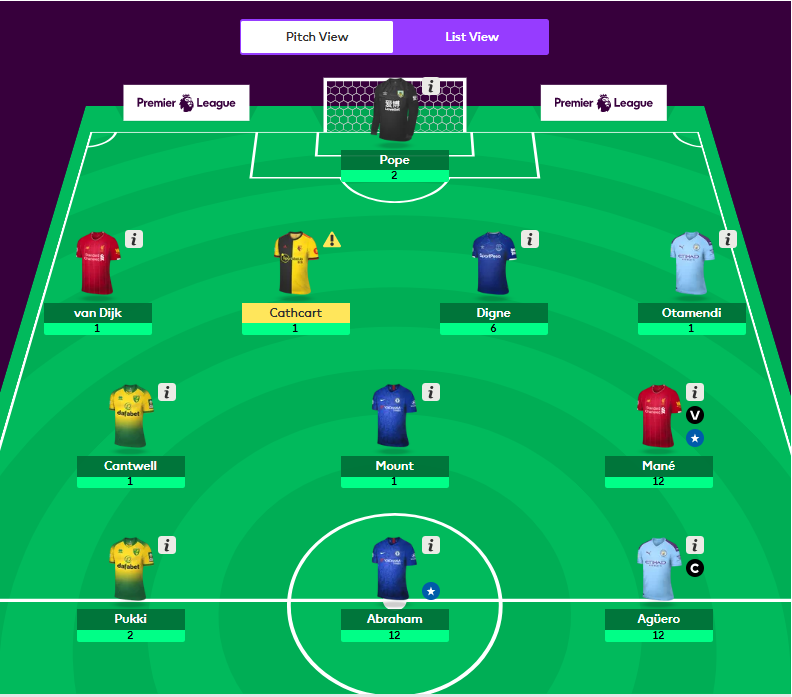 Our decision to pick Pope (2) over Ryan backfired as he walked away from GW11 with only two points, compared to Ryan who earned a total of six. Pope suffered a painful 3:0 defeat against Sheffield United, meaning he conceded three or more goals for the third time this season.

Van Dijk (1), Cathcart (1), Digne (6) and Otamendi (1) earned us a total of nine points this GW, which is a slightly underwhelming result, yet the best possible result we could have got with our defenders. Van Dijk earned only one point in Liverpool’s match with Aston Villa due to a yellow card and a goal the Reds conceded, which was surprising to see. While Liverpool managed to grab the win in the final minutes of the match, van Dijk was unfortunately not involved in Liverpool’s goals this week. Cathcart played for only 19 minutes, against Chelsea (1:2), which also earned him only one point this week. Digne impressed with six points, which he earned with an assist in Everton’s draw with Tottenham (1:1), whereas Otamendi finished with only one point, as he played for only one minute. We had hoped Otamendi would play for whole 90 minutes, which would net us a nice sum of points, however, Guardiola decided to not pick him as the starter.

Cantwell (1), Mount (1) and Mane (12) earned us 14 points, which is a solid result, but only due to Mane’s impressive performance, as he was the main man behind Liverpool’s thrilling comeback against Aston Villa. He scored a goal and added an assist. Mount and Cantwell, unfortunately, failed to be as successful, earning only two points. A slightly underwhelming result, overall.

Pukki (2), Abraham (12) and Aguero (12) earned us 26 points in total, which is a solid result in our eyes. While Pukki once again failed to deliver, we can be happy with Abraham who scored a goal and added an assist against Watford. Aguero on the other side scored a goal against Southampton, which we can’t complain about. He earned six points, but because he is our captain, he walked away with 12 points. While we of course expected to see more from the Argentinian striker, he at least ended his spell of four consecutive fixtures without a goal.

In total, our team earned 51 points, which is an improvement compared to the last GW, yet two points under GW11 average of 53 points. All players played fairly well, except for Cantwell and Pukki, making us think whether it’s worth waiting for Norwich to find their form or should we consider swapping them out for more lucrative options. At this point, we have a tough decision to make whether we should wave goodbye to Norwich’s duo or keep our trust in them and hope their performance can result in some points in the next game week. That said, we will reveal more comes next game week. 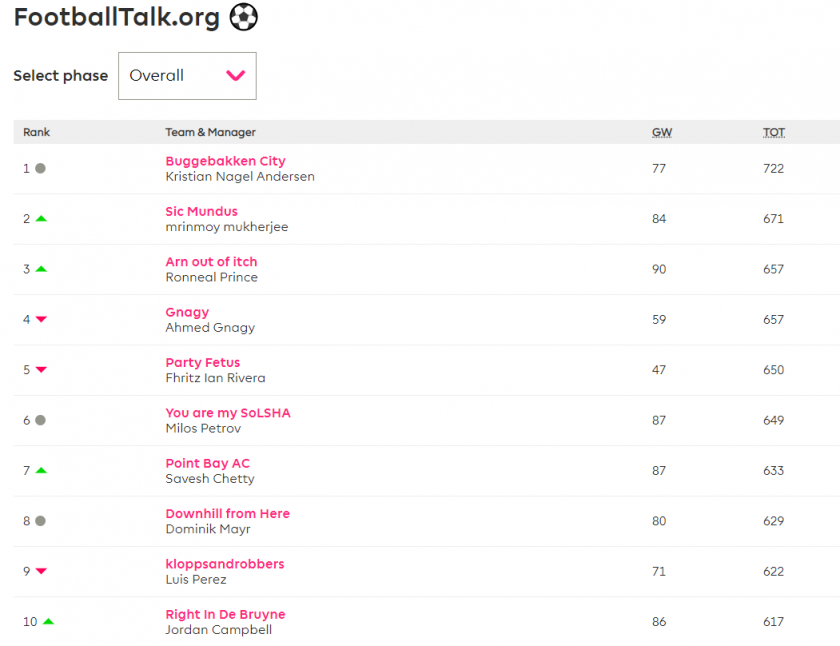 Buggebakken City still stand at the top of our EPL Fantasy League after GW 11, but we have some changes in the Top 4. Sic Mundus moved to the second position, while Arn out of itch produced 90 points this gameweek. He had 5 players from the Dream Team but failed to pick the right captain (Kevin De Bruyne), who got only 4 points.

That’s for the Fantasy EPL GW 11 recap. The next Fantasy EPL tips for GW 12 will be live on footballtalk.org tomorrow.