We are back with another EPL Fantasy gameweek recap, where we check how our fantasy team performed, how successful we were and how did our performance compare to previous weeks.

Throughout the season so far, we have been on an up and down path without results. A 36-point game week one, followed by 64-point gameweek two, 34-point gameweek three, 54-point gameweek four and now another solid 58-point game week five. While by no means a huge achievement, we did finish above the average (52 points) and we can be happy with that. Before we look over how our fantasy team performed let’s check the fantasy EPL dream team for GW5. 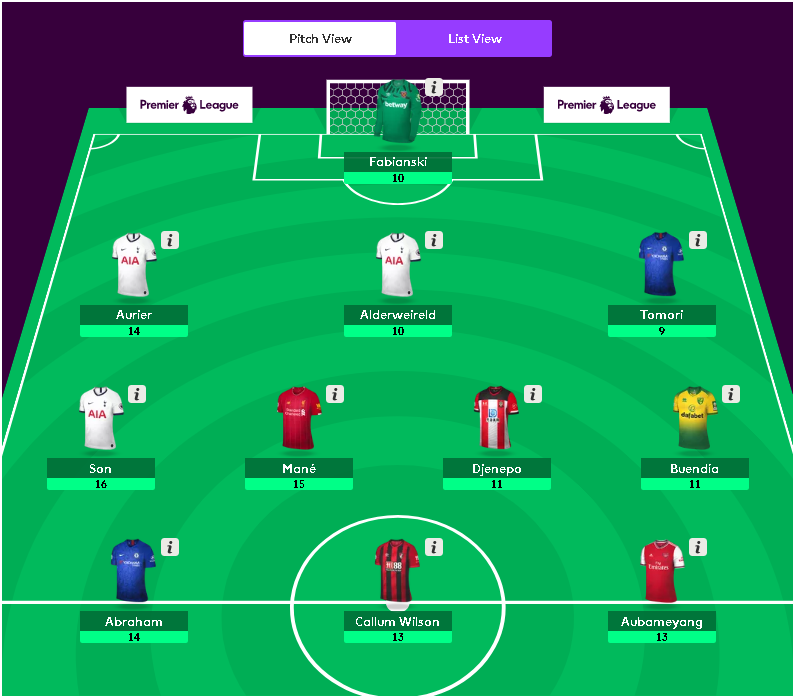 Fabianski returned to the dream team for the second week in a row with a superb performance against Aston Villa, which earned him a total of 10 points. While his whole team performed admirably well, no other West Ham player found its way into the dream team. Instead, we got to see two Tottenham defenders in Aurier and Alderweireld who helped Tottenham earn a much needed 4:0 win over Crystal Palace. Alderweireld finished the gameweek 5 with 10 points, whereas his teammate Aurier ended with 14, due to his two assists in the mentioned fixture. Standing proudly next to them we got Tamari who did not fail to impress in his second fixture of the season with a goal against Wolverhampton, which earned him a total of nine points.

In the midfield, we have four players in Son (16), Mane (15), Djenepo (11) and Buendia (11). Both Son and Mane scored twice in their round five fixtures, Djenepo scored once against Sheffield Utd, whereas Buendia produced two assists in Norwich’s impressive 3:2 win against Manchester City.

The attacking line of week 5 dream team consists of Abraham (14), Callum Wilson (13) and Aubameyang (13). Aubameyang and Callum Wilson both scored two goals in their fixtures, whereas Abraham once again impressed with a hat trick against Wolverhampton, meaning he has now produced at least 13 points in all of his last three fixtures.

In total the dream team of gameweek five earned 136 points, which is the third most, only trailing the week one dream team which accumulated 142 points and gameweek four dream team with 137 points.

Now that we got that out of the way let’s check how our team performed this gameweek. 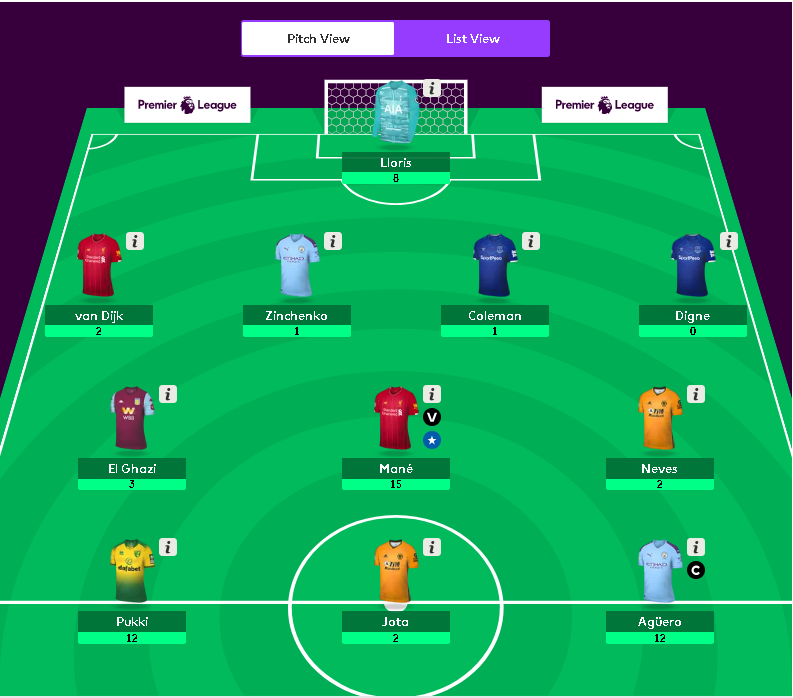 While not as successful as Fabianski, Lloris did not fail to impress us with eight points, which he earned with a very solid performance against Crystal Palace. As expected, he did improve upon his previous results and earned his first clean sheet of the season. Is that a sign of more to come is anyone’s guess, that being said, we will keep our trust in him, he can impress further comes round six.

To say it was not the best gameweek for our defence would be an understatement. In total, our four defenders accumulated four points, which is by far the worst result we have seen from our defensive line.

Van Dijk finished his round five with two points, Coleman with one, Digne with zero and Zinchenko with one. It’s worth noting Cathcart got injured and did not play, meaning Zinchenko replaced him in the line-up, and we all know how City played this week, so no surprises as far as his debut for our fantasy team is concerned.

Moving down to our midfield, El Ghazi, Mane and Neves accumulated 20 points, which is a solid result. El Ghazi, unfortunately, failed to score a goal against West Ham (0:0), meaning he finished his round five of EPL with three points. On the other side, Neves once more failed to repeat his success from gameweek two and walked away from the fixture with no goals nor assists, meaning he once again disappointed with only two points.

Despite mediocre results from El Ghazi and Neves, we can be happy with the performances Mane showed. With two goals against Newcastle, he earned 15 points. That being said, we did decide to give our captain armband to Aguero, meaning we once again missed the opportunity to earn significantly more points. Nonetheless, it’s hard not to be happy having a player from dream team on our team.

A very solid result from our strikers this gameweek. We first need to address Jota, who failed to score a goal or produce an assist against Chelsea, meaning he once again earned us only two points.

That being said, we did see can be happy with Pukki and Aguero, who produced 12 and six points respectively. Interestingly enough, they did so against each other. Pukki scored a goal and added an assist against Manchester City, whereas Aguero scored only one goal in 90 minutes played. Despite that, his captain armband doubled his points, meaning his total sum was 12 points.

Overall, we are happy with how our team did this gameweek. Things could’ve gone much better, had our defensive line performed only slightly better. Nonetheless, we did see some very solid performances from our players, which pushed our total points to 58. Looking over the team, it’s obvious there are more than a couple of changes we have to make. We started off the season with a few risky picks, and while some of them proved to be solid picks, others failed to impress so far. Who that might be, what will the changes be and how will we approach gameweek 6, will be revealed in our next article.

There are few changes at the top of our Fantasy EPL league. Dominik Mayr dropped on the 3rd spot, while the new leader is Ronneal Prince and his team “Arn out of itch“.

Ronneal Prince has earned a total of 67 points in the GW 5, while only strikers got 38 points (Abraham 14, Pukki 12 and Aguero (C) 12). The difference between 10th on the table and top team is 26 points which are very low difference. Many teams from our league haven’t used Wildcard yet, so it would be interesting in the upcoming weeks.

That’s all for Gameweek 5 and we are looking forward to seeing what will happen in the Gameweek 6 which starts on Friday when Southampton host Bournemouth.