EPL Fantasy Tips for Gameweek 6 are ready so in this article we will check how will our fantasy team look like and give you some EPL fantasy tips for GW 6. With all the eyes on Champions League fixtures, it would be easy to forget the sixth round of Premier League is just around the corner, meaning it’s once again time for us to prepare our fantasy team for the challenges that await them in the upcoming days, hoping they can impress and earn us some juicy points.

So without further ado, let’s check how our roster will look like this weekend. 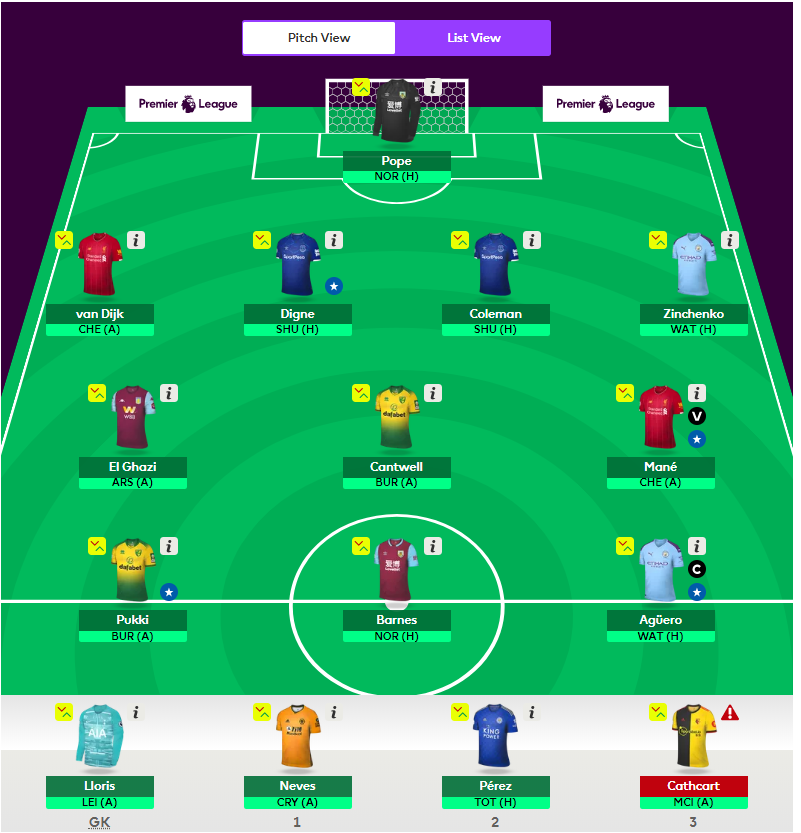 This week it will be time for Pope to shine, as his team hosts Norwich, who we all know is more than capable of producing more than just a couple of attempts on goal.  That being said, we can expect a lot of action in front of Burnley’s goal, and we will trust Pope to shine here and make a couple of saves.

We avoided picking Lloris this weekend, considering Tottenham are heading to King Power Stadium for their next fixture, where we are not too confident they can impress against Leicester, who are a very solid home team.

Entering gameweek six, we have got van Dijk, Digne, Coleman and Zinchenko as our four defenders.

Liverpool will travel to Stamford Bridge on Sunday, September 22, where they will chase their sixth win of the season against Chelsea, who have not been too impressive so far. Chelsea, while known to be aggressive, concede way too many goals, which could result in van Dijk getting into the action and contributing to a goal himself. A clean sheet for Liverpool here could be out of the question, yet we believe van Dijk can deliver.

Joining him, we will welcome back Digne and Coleman who will face off with Sheffield United at Goodison Park. Sheffield, have produced some solid results so far, but have not yet impressed in away games. We will once again count on Digne to perform on both ends of the field, which considering the opponents his team is facing, gives him a solid chance to do so. Last but not least, we have the newcomer Zinchenko, who has been playing very well so far, and we don’t see that changing this fixture.

In the midfield, we have got El Ghazi, Mane and the new arrival Cantwell.

As have mentioned above, Liverpool’s trip to Stamford Bridge is expected to end in more than a couple of goals, and if Mane can keep producing similar results to what he has shown in last two EPL games, there is no reason why he would not be involved in at least one goal.

As far as Arsenal v Aston Villa fixture is concerned, Arsenal have not yet impressed with their defence, which conceded eight goals so far. There is a reason to believe the Gunners will far better against Aston Villa, but that does not necessarily mean they will walk away unharmed. With that in mind, we will count on El Ghazi to contribute to Aston Villa’s attack and maybe even score a goal of his own. Cantwell, as our third midfielder has proven himself in Norwich, and has for that reason found himself in our squad. Norwich are facing Burnley in the upcoming fixture, where we can expect them to once more produce quite a few shots on goal, and if Cantwell can replicate what he has shown against Man City, he could easily score his third goal here or at least get involved in a goal with an assist.

Our attack will consist of Pukki, Aguero and Barnes, as our new addition and replacement for Jota.

As far as our expectations for Pukki are concerned, we have already mentioned what we feel about Norwich v Burnley fixture this week. The Norwich star striker is among top five for shots inside the box over the last four gameweeks, which on top of his superb form makes him a no-brainer pick here. While we talk about solid form and top-tier strikers, we can’t simply ignore Aguero, who is expected to do some damage against Watford this week. He has scored at least once in all five fixtures so far, and we can’t see that changing against Watford, who will be in for a tough away match against Manchester City, a team that has defeated them in every single match since 2013.

Last but not least, we have got the newcomer to our team, Barnes from Burnley. We picked him not only due to his solid performances so far into the season, but the aerial threat he brings, which is a big weakness of Norwich. With that in mind, we see him as a very solid fantasy tip for the upcoming gameweek, or at very least a huge upgrade from Jota.

In our substitutions, we have got Lloris, Neves, Perez, and Cathcart (I).

This concludes our EPL fantasy preview for gameweek 6. We have added two new additions to our team in Barnes and Cantwell, who we believe are both very solid improvements compared to players they replaced. Will they deliver, however, is anyone’s guess. As far as our captain is concerned, we will stick with Aguero once again. While Mane would be a very solid pick as well, we are confident Aguero can do much more damage against Watford, compared to what Mance can do against Chelsea.