We are back again with another EPL Fantasy game week recap. This time we will take our time to look back at Premier League’s round 16 and as always look over how our team performed, where did we go right, where did go wrong and what our final tally looked like. But before we do that, let’s first take a quick look at the dream team of game week 16. 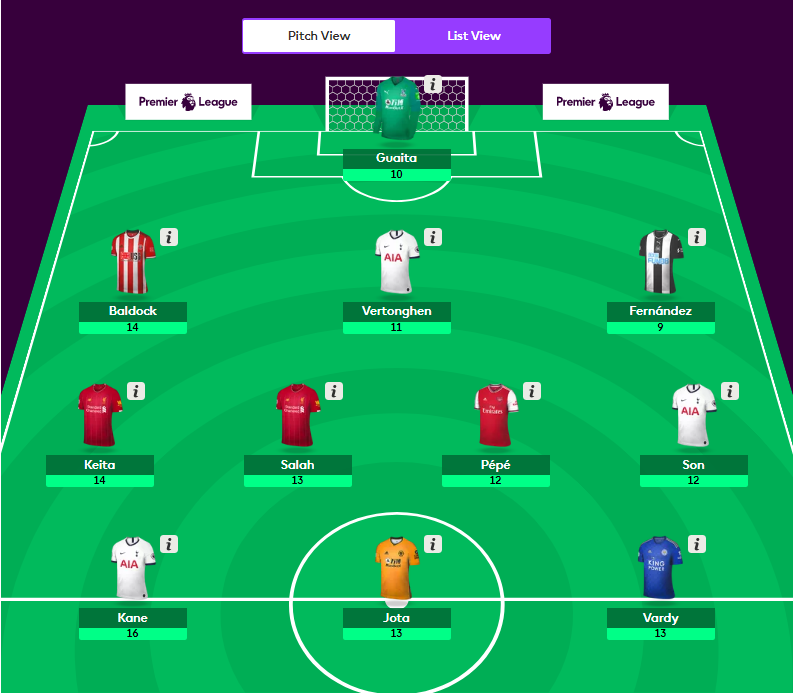 Vicente Guaita (10) proved to be the best goalkeeper of the round with his performance against Watford, where he put up seven saves and helped Crystal Palace claim a clean sheet. He earned 10 points, which is his season-best result so far and third solid performance in a row, seeing how he claimed eight points in both round 14 and round 15. Joining him in the back, we have Baldock (14), Vertonghen (11) and Fernandez (9).

Baldock earned season-high 14 points for his goal and assist against Norwich, which helped Sheffield United claim a much-needed win. While Sheffield United failed to keep a clean sheet, Baldock can be happy with what he has shown seeing how he scored his second goal of the season and booked his third assist of the year. Vertonghen has made a splash after returning to the starting lineup for the third consecutive fixture. He not only helped Tottenham keep a clean sheet but also contributed an assist, which earned him season-high 11 points. Last but not least, Fernandez earned nine points with a goal against Southampton. Just like it was the case with the other two defenders, Fernandez earned himself season-high points.

Keita (14), Salah (13), Pepe (12) and Son (12) are the four midfielders who found their way into the dream team with their superb performances last week. Both Salah and Keita scored a goal and added an assist in Liverpool’s win over Bournemouth, while Pepe managed to achieve the same results in his clash with West Ham. Son continued the trend of a goal and assist by scoring his fifth goal of the season and added his ninth assist in Tottenham’s dominant win over Burnley (5:0). As for the strikers, we have Kane (16), Jota (13) and Vardy. Kane woke up from his slumber and scored two goals and added an assist in Tottenham’s win over Burnley, while both Jota and Vardy scored twice in their matches.

In total the dream team of GW16 earned 137 points, which is nine more compared to last week.

Now let’s take a look at how our team performed. 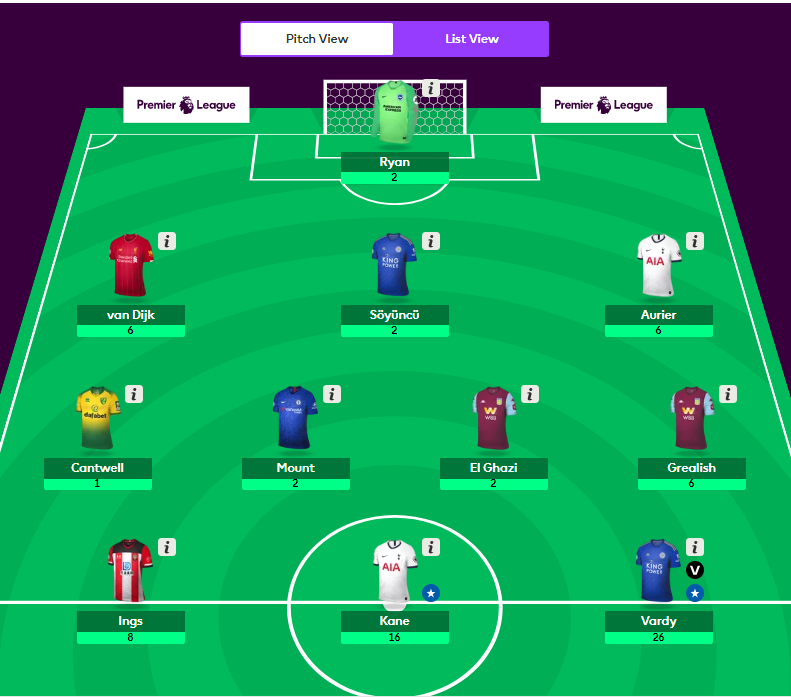 Our goalkeeper Ryan (2) failed to impress, yet he still earned a solid amount of points considering he had to face Arsenal’s potent attack. He conceded two goals and earned no bonus points, which awarded us two points. His replacement, Pope walked away from round 16 with no points, meaning we at least made the right decision to sit Pope out.

Van Dijk (6), Söyüncü (2) and Aurier (6) earned us 14 points, which is a solid result. Both Aurier and van Dijk helped their teams keep a clean sheet, while Söyüncü failed to do the same. No defender was involved in any of their teams’ goals.

Cantwell (1), Mount (2), El Ghazi (2) and Grealish (6) earned us a slightly underwhelming 11 points in total, which was far from what we expected to see. Cantwell suffered a painful 1:2 defeat against Sheffield and played for only 18 minutes, thus earned only one point. Mount played for the whole 90 minutes but failed to produce anything noteworthy. In fact, Chelsea as a whole were very mediocre in their clash with Everton who deservingly won the said match 3:1.

El Ghazi also played for whole 90 minutes but failed to make anything happen. That, however, can’t be said for his teammate Grealish, who was the only goalscorer for Aston Villa in their meeting with Leicester. With his fourth goal of the season, Grealish earned us six points, which is a very solid result in our book.

Despite somewhat mediocre performance from our midfield, out strikers managed to carry the weight of our team through round 16. The trio of Ings (8), Kane (16) and Vardy (26) accumulated 50 points which was an outstanding result.

Ings once again scored a goal and added two bonus points, which earned him eight points in Southamptons’ defeat against Newcastle (1:2). Kane outperformed himself and scored twice for Tottenham against Burnley which were his first goals in three games. He also added an assist to his record, making him one of the best strikers of the week. That being said, Vardy did not look too shabby either, seeing how he as well scored twice for his team and earned 13 points. Because he was also our captain, he earned 26 points for our team.

All in all, our team earned 77 points, which is a huge improvement compared to last weeks. In fact, game week 16 proved to be the most successful week for our team so far this season, surpassing our GW2 record of 62 points by a whole 15 points. Unfortunately, our midfield failed to deliver this gameweek, which would help us break the 80-point mark. That being said, we can’t be too disappointed with what we have achieved this gameweek and we will hope to keep the streak alive.

Our Fantasy EPL Table after GW 16 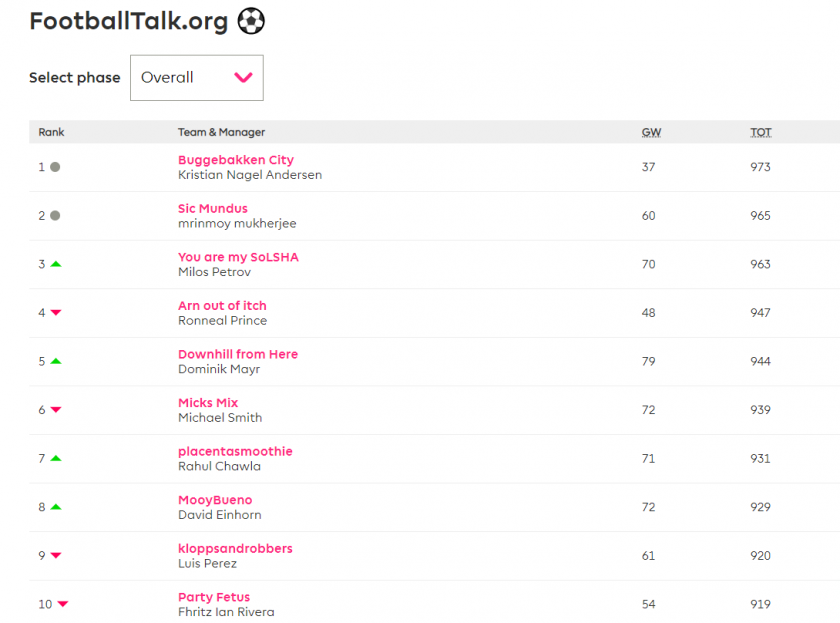 Kristian is still on the top of our fantasy league after gameweek 16, but “Sic Mundus” and “You are my SoLSHA” are close to him. It means that our FPL becoming more and more interesting.

This round was also qualifying round for FPL Cup. If you are ranked in the top 4,194,304 players, you have been qualified for the Cup competition. You can check that information on right sidebar on the official Fantasy EPL site. Other information about Cup you can find here.