We are back again with our EPL Fantasy tips and preview this Christmas morning, where we look ahead what awaits us in English Premier League Gameweek 19, how we will approach the upcoming fixtures and which players we choose to represent our team. It will be very busy a couple of days ahead of us with plenty of matches set to be played throughout the next week, which will give us a great opportunity to earn plenty of points, but before we get too ahead of ourselves, let’s take a look at how we got ready for GW19. 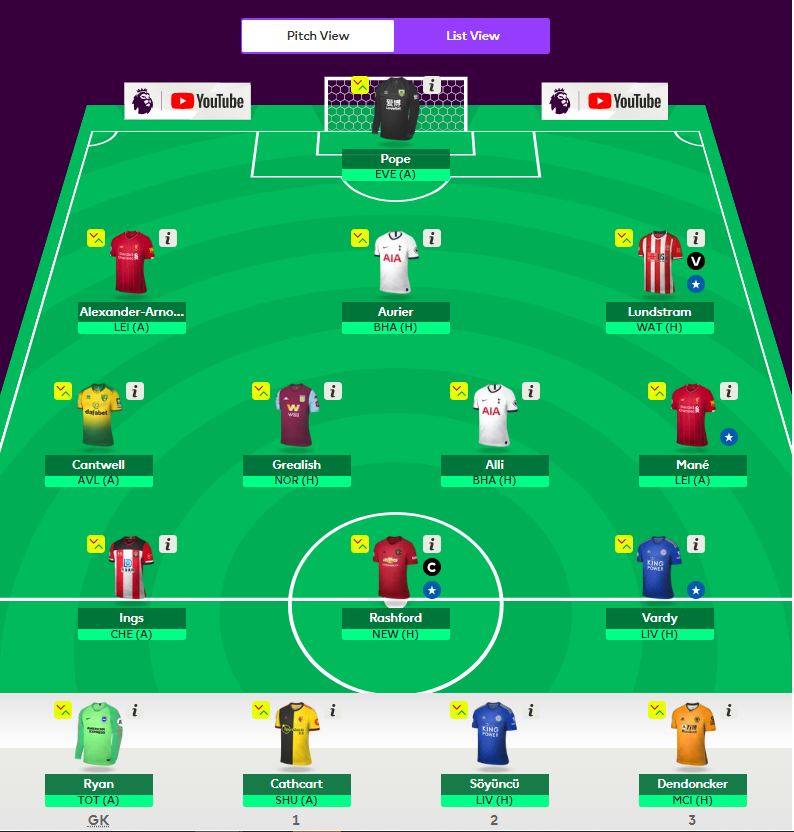 It was a fairly easy job picking our goalkeeper for round 19 of EPL, seeing how Ryan is facing Tottenham, while Pope will clash with Everton. While Everton have been slightly improving lately, we trust Pope is by far a better option for our team as compared to Ryan and considering he has been in a great form, having earned 13 points in the last two rounds, it’s easy to pick him for our team here.

Moving down to our defensive lineup, we opted to play three players – Alexander–Arnold, Aurier and Lundstram.

Alexander-Arnold will meet with Leicester, which will be a crucial match for both sides to win, considering that if Liverpool manage to grab all three points, they could be miles ahead of Leicester in their race towards the EPL title. For that reason, we can expect Alexander-Arnold to put up a show and while this match really seems like it can go either way, the Liverpool defender is in our mind the best option out of our two remaining defenders.

Joining him, we have Aurier, who was not all too impressive last two rounds, yet we can expect that to change this round, when Tottenham faces off with Brighton at home stadium. A clean sheet is not entirely out of the question and we have our confidence Aurier can do some damage in the attack as well if given a chance. Lundstrom as our third and final defender has been phenomenal in recent weeks and we don’t expect that to change this round, where Sheffield United faces off with Watford. While the Hornets won their previous match against Manchester United, we are confident that was more of a fluke than anything else, which is why we can’t see how Sheffield United won’t be able to put up a show here.

We have added a new player to our midfield (Dele Alli), who is expected to replace the suspended Son. While Alli has not been too impressive in the last two rounds (two and one points respectively), he will play a major role for Tottenham’s midfield next round and in our eyes, he should be more than capable of producing some nice points for our team.

Joining him we have Cantwell, Grealish and Mane. Cantwell, while a player we almost lost hope in, has ended last game week with 10 points with a goal, which should give him the needed confidence to continue his solid performances. Next round, he will meet with Aston Villa and Grealish, who is our second midfielder. Much like Cantwell, Grealish has been very solid recently, with three goals in the last five games. The match between Aston Villa and Norwich will in our eyes be an exciting one, where we could see both of our players contribute something. Mane is our fourth and final midfielder for whom we have high expectations. He has been in great shape as of late and seeing how his next match against Leicester will be crucial to win for Liverpool, there is a high potential for him to score us some nice points. That being said, it won’t be an easy fixture, and for that reason, we opted to no pick him as our captain here.

No changes from last game week in our offence. We will enter GW19 with Ings, Rashford and Vardy. Ings will meet up with Chelsea, which will be a true test of his abilities. While Chelsea have not been too impressive lately it’s safe to say Ings will have to work hard to make something happen, but considering he has 11 goals to his name already, with seven goals in his last seven fixtures, we are confident there is a solid chance he will contribute here as well.

Rashford was a disappointment last week when he failed to produce a goal against Watford. Not only did he fail to score, he and his team also lost to their opponents, meaning Manchester United will enter GW19 hungry for points, which should inspire some more efficiency in the team. With that in mind, we can expect Rashford to step up and perform, which is also why he is our captain for GW19. Vardy is our third and final striker, who will participate in a very important fixture against Liverpool. It goes without saying this one will be a tough match, considering the Foxes already lost to Manchester City last round, however, much like it’s the case with Man United, we can expect Leicester to switch into a higher gear here and with that in mind, we can only hope Vardy will end up with some points in his hands.

In our substitutions, we have got Ryan, Söyüncü, Dendoncker and Cathcart.

With that we have come to the end of our FPL GW19 preview. The biggest concern for this week us the Liverpool versus Leicester match, which in all fairness can go either way. That being said, we have high hopes for our Tottenham duo Aurier and Alli, as well as Rashford, who should play a pivotal role in the Man United’s clash with Newcastle. Furthermore, we expect great things from Cantwell and Grealish who will meet each other this Thursday. All in all, we are hoping this game week will be just as successful if not more as our previous round where we scored 62 points.