Premier League Gameweek 8 was one for ages, with a handful of upset wins that took many by surprise and we were no exception. That being said, it’s fair to say our EPL Fantasy team performed well, considering we have finished well above the gameweek average and crawled our way into the top 5% out of all 6,885,000 players that participated in the GW8. But before we take a dive and look over our team, let’s first check out the fantasy EPL dream team aka. the 11 best performing players of this week. 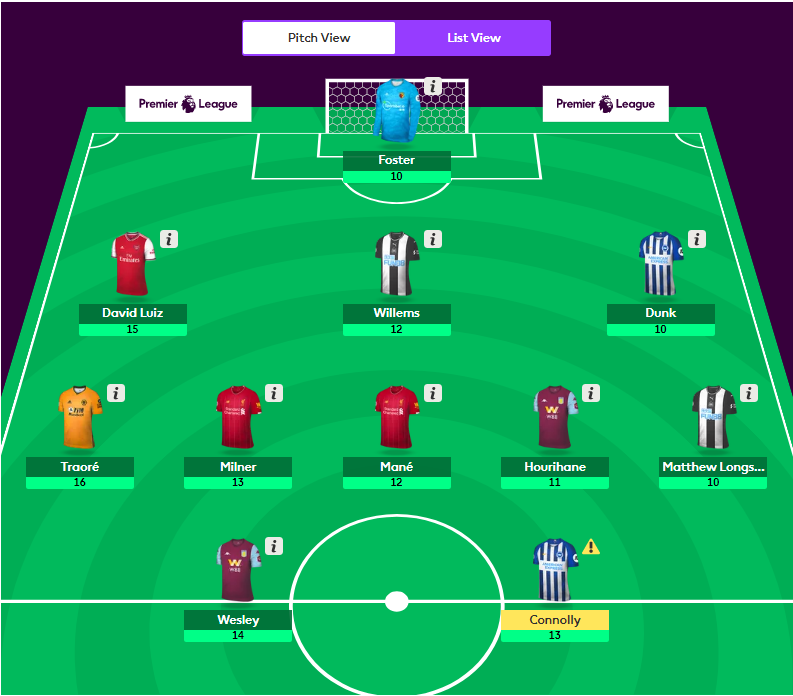 Ben Foster (10) impressed with his performance in Watford’s clash with Sheffield United, where he kept his goal untouched despite immense pressure from the visitors, who were chasing their third win of the season.  In the defence, we have David Luiz (15), Willems (12) and Dunk (10) as the three defenders who found their way into the dream team. David Luiz contributed the game-winning goal for Arsenal in their clash with Bournemouth (1:0), Willems was the man behind the assist for the game-winning goal of Newcastle, who humiliated Manchester United, whereas Dunk passed for the third goal in Burnley’s upset win against Tottenham (3:0).

In midfield, we have a total of five players, who proved they are above the rest. Traore (16) was the man of the match in Wolves clash with Man City (2:0) with two goals to his name, Milner (13) scored the game-winning penalty for Liverpool who dismantled Leicester (2:1), Mane (12) booked a goal and an assist, Hourihane (11) scored his first goal of the season and added an assist in Aston Villa’s trashing of Norwich (5:1), whereas Matthew Longstaff (10) shock everyone with a goal against Man United on his debut appearance for Newcastle. In the attack, we have Wasley (14) from Aston Villa with two goals and an assist to his name and Aaron Connolly (13) who scored twice against Tottenham in Burnley’s upset win on Saturday.

In total the dream team of gameweek 8 scored 136 points, which is 13 points increase compared to the last gameweek.

Now let’s take a look at our EPL fantasy team and how it performed in the Gameweek 8. 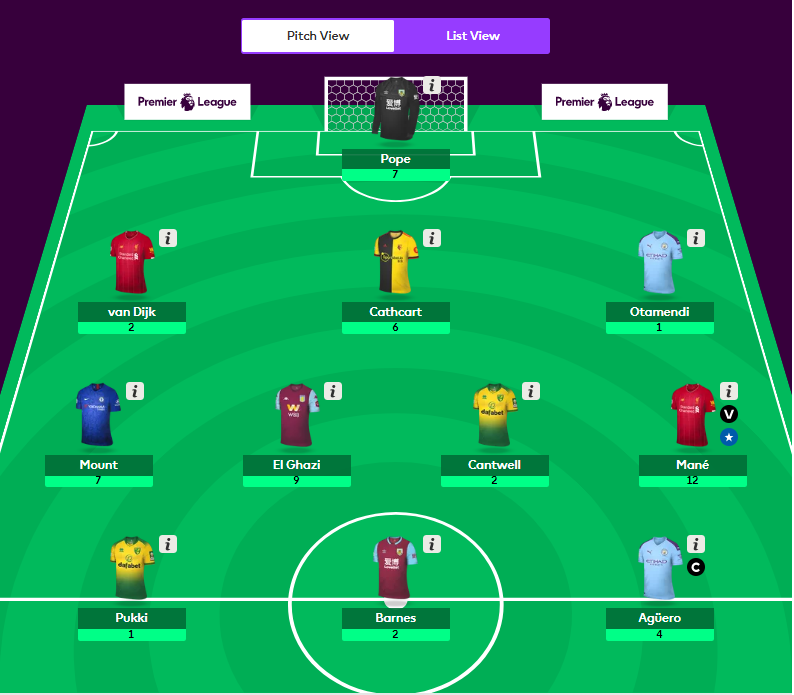 Pope (7) might not have emerged as the best goalkeeper of the week, however, he did put up solid seven points in Burnley’s clash with Everton, which ended in the Clarets’ favour (1:0). Our decision to keep Lloris out of the team, in the end, proved to be the right one, seeing how not only he conceded a goal against Brighton, but also suffered an injury, which will keep him of the pitch for an undisclosed time.

Van Dijk (2), Cathcart (6) and Otamendi (1) accumulated nine points, with Cathcart emerging as the most successful defender in our team. Van Dijk ended the match against Leicester with two points, whereas Otamendi ended this gameweek with only one despite a couple of opportunities to contribute to Man City’s goal. However, as we now know, luck was not on Manchester City’s side in their meeting with Wolverhampton (0:2). Unlike van Dijk and Otamendi, Cathcart impressed with his performance, where helped Watford keep a clean sheet against Sheffield Utd (0:0), which earned him season-high six points.

It’s hard to not be impressed with how our midfield performed, seeing how Mount (7), El Ghazi (9) Cantwell (2) and Mane (12) accumulated 30 points.

Our newest addition, Mount (7) scored his fourth goal of the season in Chelsea’s thrashing of Southampton (4:1). Next to him, we had El Ghazi, who did not let us down.  Following his five points in round six and seven points in week seven, El Ghazi contributed nine points with two assists for Aston Villa in their meeting with Norwich (1:5). Cantwell once again failed to impress with two points to his name, which marks the third fixture in a row he was not involved in Norwich’s success, which to be fair is not a surprise seeing how Norwich’s bubble has seeming burst with three consecutive defeats in the Premier League. Last but not least, we have got Mane, who contributed a goal and an assist in Liverpool’s win over Leicester (2:1), which earned him 12 points and a spot among the dream team.

Pukki (1), Barnes (2) and Aguero (4) accumulated seven points, which is by far the worst result for our attack so far into 2019/20 season. Pukki walked away from this gameweek with only one point, which is not surprising seeing how Norwich kneeled down to Aston Villa (5:1) and while the Canaries scored one goal, Pukki was not the scorer on that occasion. Barnes was involved in Burnley’s win 1:0 over Everton, however, just like Pukki, Barnes failed to score a goal on that night. Aguero, who we have relied on scoring goals for the whole season failed to impress in Man City’s upset defeat against Wolves (0:2). That is not to say he did not have opportunities to score a goal, however, as we have mentioned, luck was not on the side of Guardiola’s men on that night. Aguero finished the gameweek 8 with two points, and with the captain armband, he doubled it to result in four points in total.

All in all, we can be happy with what we produced this gameweek. While our attack failed to impress, we still ended with 53 points, which is 17 points above the average (36 points).  With international duties on the schedule for next weekend and the EURO 2020 qualifiers, we will have a bit more time to decide where to take our team, what changes are needed and ultimately how will our team look as we step into gameweek 9.

In our fantasy EPL, there are no changes at the top of the table. Kristian and his team “Buggebakken City” are still on the top with the huge difference, the second is Gnagy, while on the 3rd position stands Ronneal Prince. 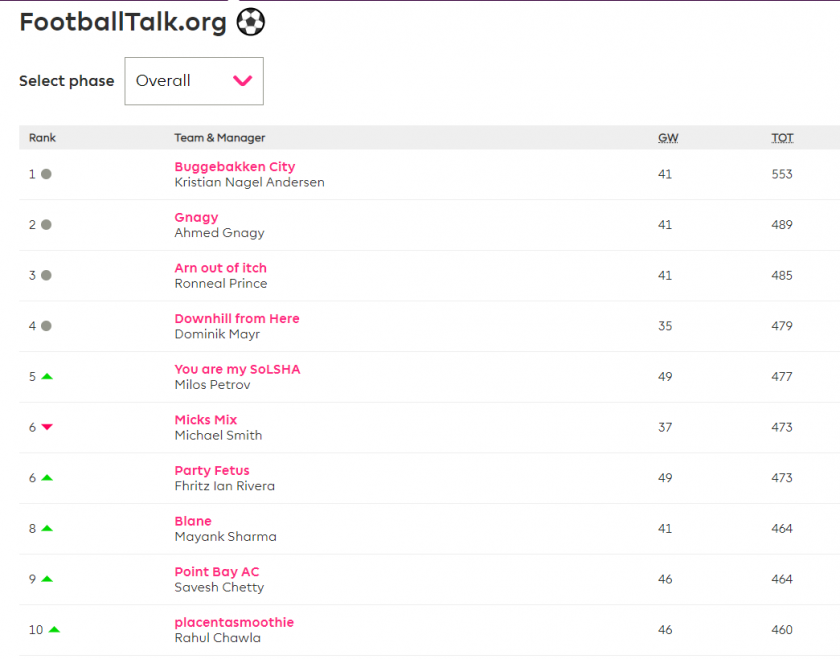 The interesting fact is that all three top teams had the same number of points in GW8. We will take a rest this weekend due to the international break in all European leagues, including Premier League, so during the next week, you can expect the EPL fantasy tips for gameweek 9.