Round 21 of English Premier League will kick off on January 1, 2020, with nine exciting fixtures which for some teams will offer a great way to start fresh after less-than-impressive results in 2019 and for us a chance to continue our streak of solid results put up by our Fantasy team. Here we will look over Fantasy Tips for GW 21, our team and our line-up heading into the first EPL fixture of 2020. 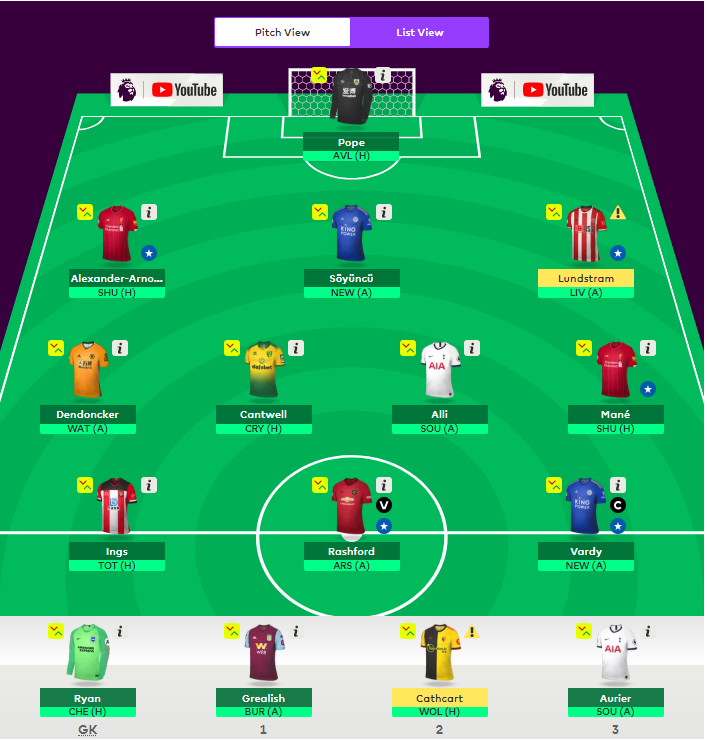 For our goalkeeper, we opted to pick Pope over Ryan. While Burnley and Pope are set to play host to Aston Villa, Ryan and Brighton will play a host to Chelsea, which will be a significantly harder match for them to walk out victorious. While Aston Villa have been playing well in recent weeks, defeating the resilient Burnley at their own stadium is in our eyes a much safer pick and for that reason, we have Pope in our goal for GW21.

Alexander-Arnold, Lundstram and Söyüncü will represent our defensive lineup for GW 21.

Alexander-Arnold has been playing extremely well as of late, earning a total of 38 points in his last three fixtures combined. Last week, he helped Liverpool defeat Wolverhampton with his solid defending, while he impressed with a goal and three assists against Leicester. Suffice to say he is in great shape and we can expect some great things from him next round when Liverpool will play against Sheffield United.

Söyüncü did not play for Leicester last round, however, we can expect him to start next game week against Newcastle where the Foxes will be chasing all three points in a bid to rebound after their defeats against Liverpool and Manchester City. We have high expectations for Leicester as there is a high probability they will be able to claim a clean sheet. Last but not least, we have Lundstram as our third defender. Much like Söyüncü, he has missed his last match, yet he is probable to appear in the next round. He has been playing well recently and we expect him to continue whit his run comes GW21.

In the midfield, we have Dendoncker, Cantwell, Alli and Mane.

This will be the debut appearance for Dendoncker for our team who will meet up with Watford next round. Last round he played for only 57 minutes against Liverpool, however, he has been one of the starters for Wolves throughout the season and we can expect him to start here as well. Wolves have also been playing well in recent weeks, which leads us to believe they will be able to perform up to par next game week and we will hope Denconcker will be involved in their success.

Joining him will be Cantwell who has had a bit of underwhelming performances in the recent two matches. Against Aston Villa, he earned only two points, while he finished GW20 with one point. That being said, he did play for only four minutes. Other than that, Cantwell finished GW18 with 10 points when he scored a goal against Wolverhampton. All in all, Cantwell has had solid performances and we will trust him to deliver in GW21 as well.

As our last two midfielders, we have Alli and Mane. We have high expectations for both, considering they were both playing well in recent weeks and have very favourable matches ahead. Alli will clash with Southampton in an away game, where Tottenham will look to bounce back following their underwhelming 2:2 draw against Norwich last round. It will be a now-or-never situation for the Spurs and we can expect them to deliver. Mane on the other side have had some excellent performances recently and there is no reason to believe he won’t play well next week as well.

No changes in our attacking line-up for GW21, meaning we will once more field Ings, Rashford and Vardy.

Ings has a tough match ahead of him as Southampton host Tottenham, however, there is a reason to believe Ings will have success against the struggling Spurs. While Tottenham will surely look to claim all three points, their defence has not been too solid, which we can expect Ings will exploit. He already has 12 goals to his name and is coming off a one-goal match against Crystal Palace.

Joining him, we have Rashford, who scored twice in his last two games and there is no reason to believe he won’t be able to do some damage against the struggling Arsenal next game week. He has had a very solid season so far and as it seems, Rashford has found his rhythm. We have high expectations for him, however, we decided to not put him as our captain, but instead our third and final striker.

Vardy skipped Leicester’s recent match with Newcastle, meaning he will be entering his next match rested and ready to do some damage. While he did not score a goal against Liverpool in GW18, he has shown numerous times before he is a deadly striker and considering he will be playing against Newcastle who have not been too solid in the defence as of late, we can expect some great things from him. Vardy will also be the captain of our team for GW21.

In our substitutions, we have got Ryan, Grealish, Cathcart and Aurier

With that we have come to the end of our Fantasy GW21 preview. The last three rounds were very successful for our team, which earned 62, 71 and 64 and we will be aiming for another 60+ week. We are putting a lot of hope in our midfield and strikers, who will have to deliver with a few goals, however, if we consider their form and the next opponents they will face, we are confident saying we have another great game week ahead of us.