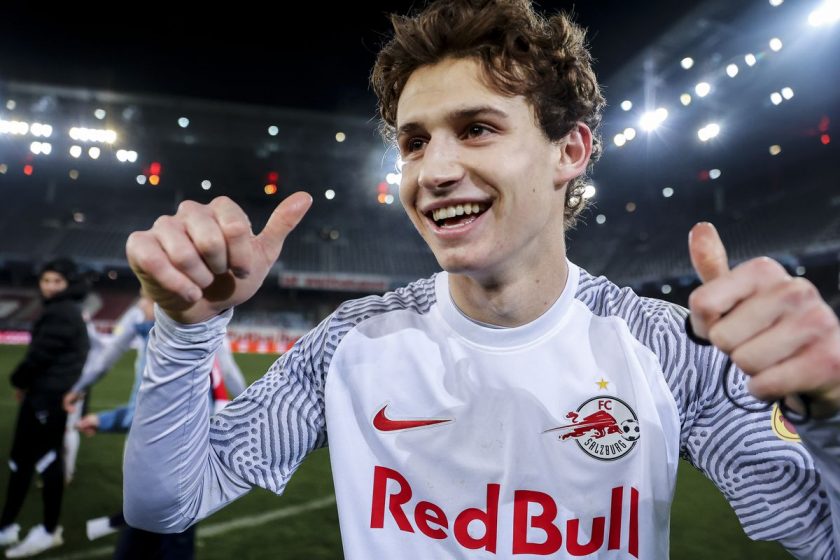 The Whites had a £20 million offer rejected by RB Salzburg for Brenden Aaronson in the January transfer window, but they will come back with a fresh offer when the transfer window reopens. FC Salzburg rejected Leeds’ bid for the midfielder as the club didn’t want to lose any of their prized assets midway through the campaign.

Aaronson, 21, has excelled at RB Salzburg since arriving from Philadelphia Union in January 2021. He is enjoying a strong campaign with the Austrian champions, with four goals and nine assists in 29 games already under the young American’s banner. The creative midfielder has played a key role in helping Matthias Jaissle’s side enjoy a healthy 14-point lead at the top of the league table after 19 games.

With Aaronson growing from strength to strength at Salzburg, Leeds United are set to face still challenge for his signature, though, with German quartet Eintracht Frankfurt, Borussia Monchengladbach, Hoffenheim and Freiburg also keeping tabs.

Kalvin Phillips is on the radar of Premier League bigwigs

Leeds United are in desperate need of reinforcements in the midfield unit amid uncertainties surrounding the future of Kalvin Phillips, who is on the radar of a few Premier League clubs, including Arsenal, Chelsea and Manchester United.

After playing a crucial role in England’s run to the Euro 2020 final last summer, though, Phillips, 26, has had an ordinary season so far with Leeds. Yet, the central midfielder is understood to have no shortage of suitors should he decide to leave Elland Road for a new challenge in the summer.

West Ham had a sensational £55million January deadline day offer rejected by the Whites for the England international and there are chances of the east London club coming back with a fresh offer. Phillips has been limited to only 12 league appearances this season due to a serious hamstring injury picked up against Brentford in December. The midfielder is due to return in March if his recovery goes as predicted.

Is Brenden Aaronson the right fit for Leeds?

After experiencing a second season blues upon their return to the top-flight, Leeds United are certain to bring in reinforcements to their squad. With Kalvin Phillips linked with a move away from Elland Road, Adam Forshaw injury prone and Mateusz Klich not impacting games as much as he did the last term, Marcelo Bielsa must prioritise bolstering his midfield unit.

In that regard, the Whites are right in planning to revive their interest in RB Salzburg’s Brenden Aaronson. The 21-year-old has featured regularly for Salzburg in the Champions League this season while bagging an assist. The USA international has four goals and nine assists this campaign, which highlights his proficiency in front of goal with the youngster clearly possessing plenty of talent.

Operating best in the no.10 role, the prospect of deploying Aaronson in the Leeds attack alongside Raphinha, Jack Harrison and Daniel James is certainly an enticing one. He is still very young and would fit Bielsa’s high-intense pressing system at Elland Road.

As the American continues to dazzle in the Austrian Bundesliga, Leeds have every reason to go again for his signature.