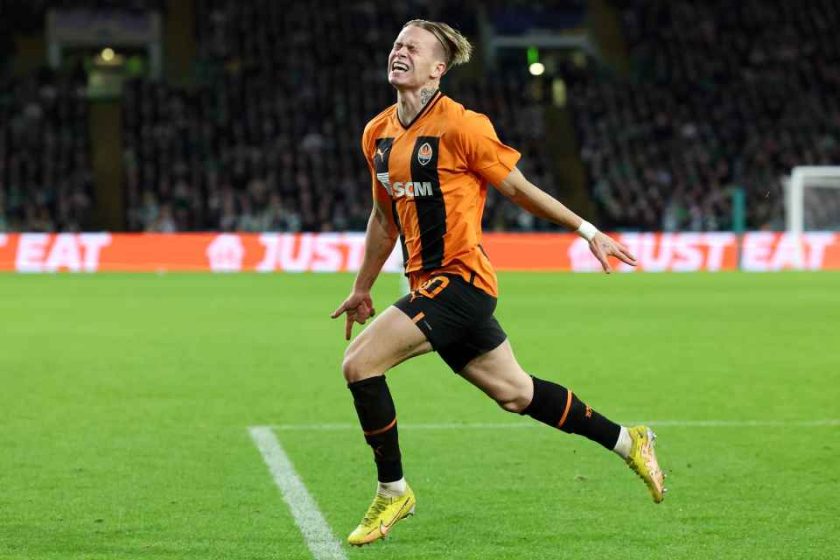 The Gunners’ first bid of £ 55 million, with £20m of that fee in potential add-ons, was rejected with the second being a lump sum overall fee but with more money upfront. Negotiations with Shakhtar Donetsk haven’t been easy for Arsenal, but talks are progressing well.

According to reputed journalist Fabrizio Romano, Arsenal have submitted a third bid for Mykhaylo Mudryk as the two parties are getting closer, although new breakthrough yet. The Gunners are still leading the race for the Shakhtar star’s signature, with Chelsea also interested but no official bid tabled as of now.

Mudryk, 21, has enjoyed a fantastic campaign in Shakhtar colours with 11 goals in 19 appearances – including three strikes in the Champions League group stages. Rated as one of Europe’s hottest prospects, the winger is believed to be pushing to join Arsenal in this winter transfer window. Mikel Arteta’s club have been boosted by the youngster’s desire to join them ahead of Chelsea, whose interest does not seem to be a serious threat at this moment in time.

Mykhaylo Mudryk would be a terrific long-term investment for Arsenal

Mykhaylo Mudryk is a long-term target for Arsenal and has publicly declared his interest in joining them on multiple occasions. Even though he has a contract with Shakhtar Donetsk until 2026, the Ukrainian club have accepted they will have to sell their prized asset at some point, with Arsenal now fully committed to getting a deal over the line.

The north London giants have lost Gabriel Jesus for at least three months to a knee injury, which has left Mikel Arteta light in the attacking department. Thus, Arteta is keen to bring Mudryk to the Emirates Stadium as quickly as possible, so the 21-year-old can be integrated into his young and exciting side.

Mudryk is a talented left-wide player but can operate on either flank. He is quick, agile and energetic blessed with a silky touch and exquisite dribbling skills. At 21, the Ukraine international is still raw but is ahead of players from his age group in terms of development and maturity.

There is a lot of untapped potential in the player and Arteta could be the right manager to help Mudryk fulfil that. If Arsenal manages to get a deal for Mudryk over the line this month, it would allow Arteta to use Gabriel Martinelli as a No.9 until Jesus returns from his injury layoff.

Shakhtar are holding out for a fee of around €100 million, which the Gunners are highly unlikely to pay. As the transfer is rumoured to cost Arsenal a sum of around €55-60 million, and if that is indeed true, the club would bag a gem of talent in Mudryk for a fee that could look like a bargain in the next few years.