According to a report from the Sun, Arsenal are one of the hosts of clubs interested in signing Paris Saint-Germain playmaker Julian Draxler in the January transfer window. 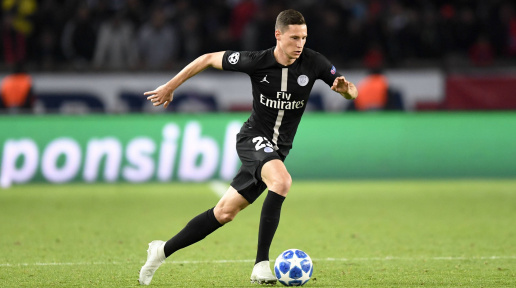 Julian Draxler, 27, has less than five months left in his contract at Paris Saint-Germain—the club he joined from Wolfsburg back in 2017. The German midfielder has struggled for regular game time over the last few seasons and looks set to leave Parc des Princes, with the player not in the plans of newly-appointed manager Mauricio Pochettino.

With Draxler’s contract at PSG set to expire in June, clubs such as Leeds United, West Ham, Newcastle United, AC Milan, Inter Milan and Sevilla are also aiming to sign him on a cut-price deal this month.

Arsenal boss Mikel Arteta has managed to steady the ship after a terrible start to the 2020/21 campaign. Even though the north London side have won three successive league games, they lie in the bottom half of the table ahead of the game against Crystal Palace at the Emirates Stadium.

The Gunners have a few problems that needs to be addressed in this ongoing transfer window if they are to achieve a spot in Europe at the end of the season. One of their glowing concerns is a lack of creativity in the final third, with midfielders Granit Xhaka, Mohamed Elneny and Thomas Partey not exactly known for it.

Mesut Ozil has not played at all for Arsenal this season after being frozen out of the first-team by Arteta, who made it clear in December that the player has no future at the club. Without the former German international’s inventive passing and guile, Arteta’s side have found it difficult to penetrate teams with low-blocks.

However, after spending the last six months on the sidelines, it seems that the 32-year-old is now expected to bid farewell as he is reportedly willing to tear up his contract at the club this month and leave ‘money on the table’. Ozil’s massive wages have continuously proven a stumbling block in negotiations but should the playmaker leave the Emirates this month, Arsenal may just have some room to manoeuvre themselves in the transfer market.

In the Gunners’ recent resurgence, 20-year-old Emile Smith Rowe has played a big part. He has combined well with fellow academy graduate Bukayo Saka in the last few games, with the duo wreaking havoc in the 4-0 victory over West Brom at the start of the month. However, it is unfair to expect consistent performances from the youngster in every game.

Thus, Smith Rowe should be managed carefully by Arteta, who must sign someone experienced that can compete with the 20-year-old as well as help him in his development.

Draxler could be a shrewd signing for the Gunners

In that regard, Draxler would be a sensible signing for Arsenal and the fact that his contract expires in the summer makes him an appealing target for Arteta. The German may have not fulfilled his massive potential at PSG but he still remains a top player who could boost Arsenal’s second half of the campaign.

At 27, the former Wolfsburg man is entering his prime years and the Gunners must do everything possible to secure his signature this month.