Arsenal are one of the clubs interested in signing Bayer Leverkusen’s highly-rated defender Edmond Tapsoba. 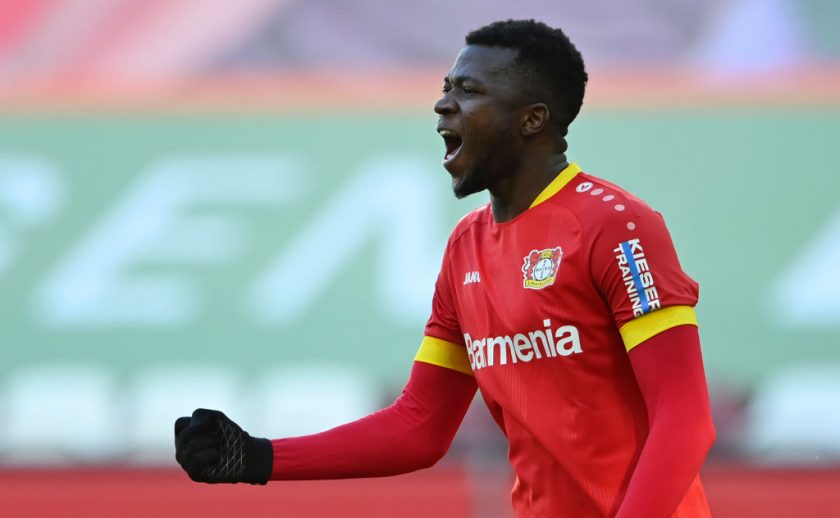 Having arrived at Bayer Leverkusen from Vitoria de Guimaraes in January 2020 itself, Edmond Tapsoba, 22, has become one of the Bundesliga club’s top players. He had a solid 2020/21 campaign—his first full Bundesliga season—where the centre-back made 31 appearances and netted a goal.

The Burkina Faso international’s development over the course of the past year has resulted in interest from across Europe, with Arsenal said to be keen on his signing. However, Bayer Leverkusen are reluctant to sell Tapsoba for any less than €60m.

Arsenal endured a disastrous 2020/21 Premier League campaign which saw them finish eighth in the table, thus, missing out on European football for the first time in 25 years. While Arteta won the FA Cup and the Community Shield, finishing eighth in back-to-back seasons in the Premier League is not good enough for a club known to compete in Europe’s top competitions.

A lot of work needs to be done in order to get the Gunners back on track, both domestically and in Europe. The north London giants have to get their recruitment spot on if they are to have chances of tasting huge success under the management of Mikel Arteta.

Arsenal are in desperate need of defensive reinforcements heading into the new season given how they struggled following inconsistent performances from the likes of Rob Holding, David Luiz, Pablo Mari and even Gabriel Magalhaes.

Luiz is set to depart the Emirates Stadium after the expiry of his contract next month, which will leave the Gunners with a lack of quality and depth in the centre-back department. And while William Saliba is returning to north London after a really good loan spell with OGC Nice, Arteta needs to make sure he brings in a quality centre-half to stabilise his backline for next season.

The Gunners’ interest in Edmond Tapsoba, therefore, is hardly surprising as they look to sign a technically gifted and tactically smart centre-back that could fit in well under the tactical philosophy of Mikel Arteta.

Tapsoba is a highly regarded defender in the Bundesliga and his impressive performances haven’t gone unnoticed across Europe. In the past campaign, the centre-back missed just one Bundesliga game when healthy and available, which documents his levels of fitness.

Aged just 22, he has shone with his pace, power and leadership qualities in the Bundesliga. In addition to being defensively sound, the Burkina Faso international is also proficient with the ball at his feet, which tunes in well with the possession-based style of play that Arteta generally employs.

Despite standing at 6ft 4in tall, Tapsoba is quite agile and athletic while possessing an impeccable reading of the game, which enables him to intercept and break up play calmly. He is a viable target as well at 22, which means he could potentially be a solution for close to a decade if Arsenal meets Bayer Leverkusen’s €60m price tag this summer.