Round 13 of LaLiga has come to a close this Sunday, and it was an exciting weekend of Spanish football, which pushed the three top dogs to the top of the league, meaning we are finally looking at LaLiga table, which looks like many expected it would from the start. Now let’s take a look at what happened this round.

Barcelona bounce back with a dominant 4:1 win over Celta Vigo

After dropping points against Levante in round 12 (1:3), the reigning LaLiga champions bounced back in style with a 4:1 win over Celta Vigo this weekend. Even before the fixture began, it was expected to be very one sided, and Barcelona made sure there would be no surprises, or at least not the kind of surprise they produced last round, where they shock the world by losing against Levante.

The opening goal of the clash with Celta Vigo happened in the 23rd minute when Messi converted the penalty awarded to Barcelona. Barcelona pushed for another goal, but instead suffered one in 42nd minute, when Celta Vigo managed to equalize the match. Fortunately, Messi stepped up again in the stoppage time (45’+1) to score his second and got his team into a 2:1 lead ahead of the second half. The second half was much closer in terms of what the two sides produced in the attack, seeing how Barcelona shot 3/5, while Celta Vigo impressed with 4/4. That said, Barcelona managed to use their chances much better. They scored their third in the 48th minute to which they added their fourth goal in 85th minute. Celta Vigo had their fair share of chances, but nothing came out of it. A deserved win for Barcelona, yet very praiseworthy performance from Celta Vigo as well.

Real Madrid dismantle Eibar to keep up the tempo with Barcelona

Real Madrid reduced the gap between them and Barcelona in round 12 when Barcelona lost to Levante (1:3), while Real Madrid chipped a point off Betis (0:0). While they managed to catch up to their rivals, Real Madrid’s performance against Betis was anything but solid. That said, Zidane’s men managed to bounce back with a very dominant win against Eibar (4:1) in round 13 when they showcased their quality to its fullest. Real Madrid started the fixture strong with a goal in the 17th minute. Barely three minutes, they scored their second with a penalty kick and added their third in 29th minute, again, via a penalty kick. With that, Real Madrid were already three up before the second half started. The second half was much slower, with Real Madrid shooting the ball barely 1/4, which is a significant decrease to their 4/6 in the first half. Nonetheless, they still managed to extend their lead with a goal in 61st minute to go up 0:4.

Atletico Madrid had an extremely slow start of the LaLiga with six draws in their opening 12 games. While it was not a disastrous start, Atleti left a lot to be desired with some questionable performances against weaker teams. That said, Real Madrid’s and Barcelona’s inconsistency kept them in the reach of the top three spots and Atletico managed to take advantage of that opportunity this round when they dismantled Espanyol to climb their way up to top three in LaLiga.

Looking at the fixture against Espanyol it was the visitors who scored the opener in 38th minute, which caused some concern for Atletico Madrid, who failed to impress so far this season. That said, Correa managed to close the gap for his team in the stoppage time of the first half (45’+1) which returned some hope to Atletico Madrid, who were chasing their first win in the last three league games. Unlike the first half which saw both teams play equally well, the second half was completely in Atl. Madrid’s favour. While they failed to impress with their shooting (3/10), it proved to be more than enough for them to score two goals. Their second came in 58th minute and third in 90’+1. Espanyol pushed back throughout the second half, but failed to produce anything worthy, seeing how they shot the ball 0/5 with 55% ball possession.

With that, Atletico Madrid finally broke the spell of two consecutive draws and won their sixth game of the season. They are now sitting at the third spot tied with Sevilla with a 6-6-1 record and 24 points. That said, they still have a long way ahead to catch up to Barcelona and Real Madrid, who are one point ahead and both still have one match in hand. 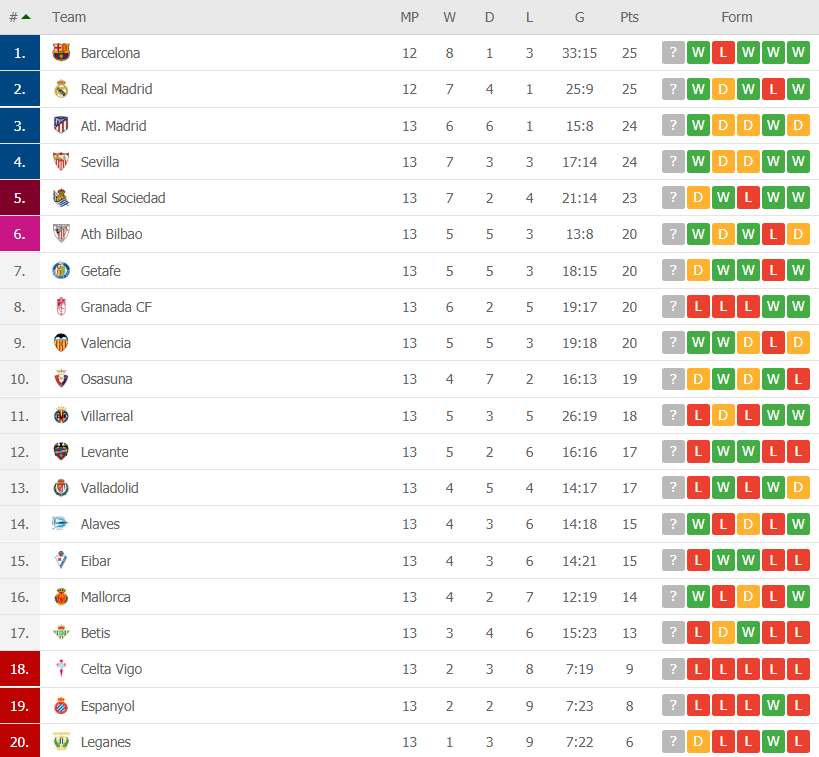 After round 13 of LaLiga, we have Barcelona (8-1-3) and Real Madrid (7-4-1) tied as the top two teams, both with 25 points. Closely behind are Atletico Madrid (6-6-1) and Sevilla (7-3-3) who have 24 points each. Real Sociedad dropped down to fifth place with a draw against Leganes (1:1), where they sit with 7-2-4 record and 23 points. In the sixth place, we have a four-way tie with Ath. Bilbao, Getafe, Granada and Valencia all with 20 points. Granada dropped down to eighth place after losing three in a row and it all seems like their bubble has finally burst.