Round 12 of the English Premier League has concluded and what a weekend of football it was. We were served with a handful of thrilling fixtures, some of which ended in an unexpected way, which only goes to show football really is a game where you never know what to expect. Now let’s look over some of the most memorable fixtures that happened and how did those shape the EPL standings.

Liverpool were seen as a huge threat to claim the EPL title this season following their incredibly close title race with Manchester City last term, and they went over and beyond all expectations with a dominant 3:1 win against man City this weekend, to establish themselves as an alpha dog of the EPL.

Not many expected Manchester City versus Liverpool clash to end the way it did, however, looking back at how the match played out, it’s safe to say Klopp’s side clearly outperformed the reigning Premier League champions and deservingly claimed all three points. Their win over the Sky Blues was not only a crucial win in the EPL title race but the continuation of Liverpool’s dominance at Anfield, where Man City hasn’t won a match in since 2003.

Looking back at the fixture between the two English titans, Liverpool got into a lead barely six minutes in, when Fabinho scored a spectacular goal following Man City’s mistake in defence. But the problems for Manchester City did not stop there, as they went down 0:2 barely seven minutes later when Salah scored his sixth goal of the season. The fixture continued with both sides producing a handful of chances but nothing came out of them. The second half started the same way as the first one, with Liverpool taking advantage of Man City’s moment of confusion to score their third goal of the match. The man behind the goal was Mane, who scored his seventh goal of the season in 51st minute.  Guardiola’s men managed to respond with a goal of their own in 78th minute, but it was too late too little to return them back into the game. Manchester City were the stronger side in the second half with 56% ball possession and nine goal attempts. Unfortunately, they failed to take their chances better as they produced only one shot on goal.

By defeating Manchester City for the first time this season, Liverpool claimed their 11th win of the season, which extended their lead ahead of the crowd to eight points and nine points ahead of Manchester City, who are not witting at fourth place in the league with an 8-1-3 record and 25 points.

Arsenal and Tottenham have not been too solid this season and from the looks of it, they will need much more time to bounce back and start performing on the level that is expected of them.

Arsenal lost their third game of the season against Leicester (2:0), which is not all that shocking, considering Leicester are performing very well this term, however, we did expect to see more from Emery’s men on that night. Leicester were the stronger side from the first minute, as they finished the first half with 54% ball possession, and shot the ball 2/9. Arsenal on the other side had only 46% ball possession and shot the ball 1/6. It’s safe to say neither side impressed with their attacking display, however, that changed in the second half.

Much like the first half, Leicester were the dominant side in the second part of the game. While they had slightly less ball possession (48-52), they used it much better compared to the visiting team. The Foxes shot the ball 5/10, while Arsenal produced only two-goal attempts and no shots on goal. With the better display in the attack, Leicester scored their first with the help of Vardy in 68th minute, to which they added another one in 75th minute. As seen from Arsenal’s shooting attempts, they did not come close to equalizing the match, which left them with zero points for the third time this season.

Tottenham on the other side managed to walk away from round 12 with one point, but it’s safe to say they expected to walk away with much more. The Spurs clashed with Sheffield United at Tottenham Hotspur Stadium, which was seen as a fixture that should end in Tottenham’s favour. That, however, was not the case. Teams performed equally well throughout and the score clearly shows that. In the first half, it was Sheffield United who played better, as they shot the ball 3/10 compared to Tottenham’s 0/8, that said, there were no goals on display. Early into the second half Tottenham grabbed a lead (58th minute) but failed to keep ahold of it for long, as they suffered a goal in 78th minute. Those were also the only two goals of the night, meaning the two sides earned one point apiece.

It’s also worth noting, both Manchester United and Chelsea won their fixtures. The Red Devils decimated Brighton 3:1 to win their fourth game of the season, while Chelsea defeated Crystal Palace (2:0) to climb the table where they now sit tied with Leicester at second place. 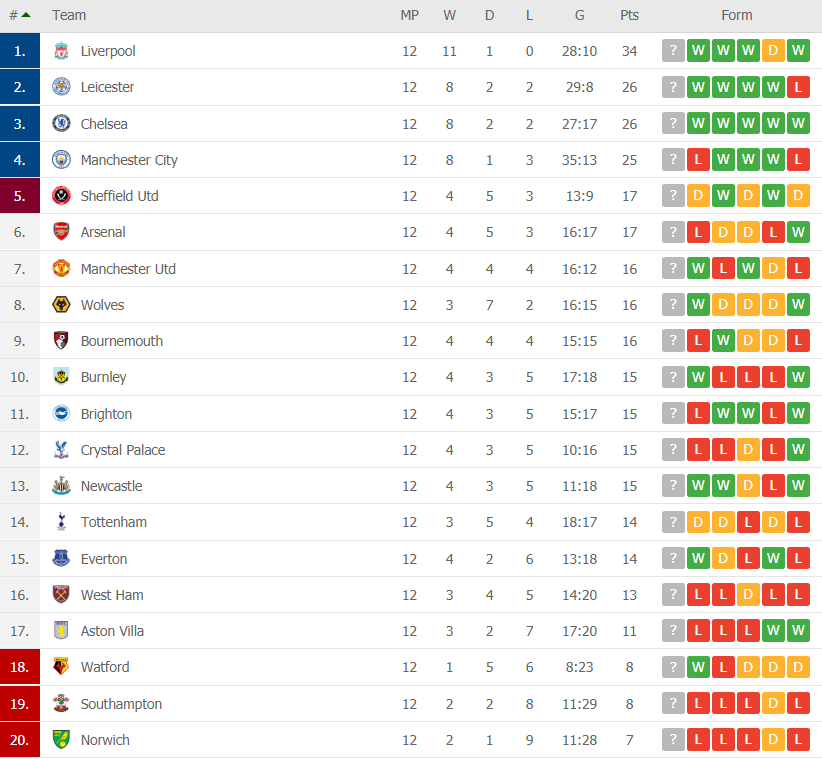 As it stands now, Liverpool are the undisputed alpha dogs of the EPL with 11-1-0 record next to their name and 34 points. Second, on the standings are Leicester and Chelsea who share a 8-2-2 record and 26 points. Manchester City dropped down to the fourth place where they sit with a 8-1-3 record and 25 points, meaning they are eight whole points short of reaching Liverpool. Sheffield are tied sixth with Arsenal with 4-5-3 record and 17 points. Meanwhile, Man United started their climb and are now seventh with 4-4-4 record and 16 points, while Tottenham descended to 14th place where they sit with 3-5-4 record and 14 points.

Some speculate the EPL title race is more or less over, and while there are arguments to be made any team will have a hard time catching up to Liverpool, the season is still fairly young and a lot can happen before we can crown Liverpool as the EPL champions.