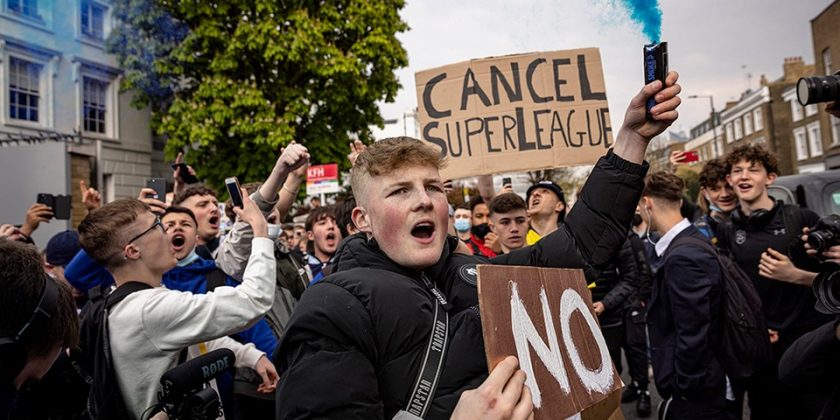 The aforementioned six Premier League clubs had officially left the European Club Association and announced plans to form a breakaway league on Sunday, which they hoped to establish as a new midweek competition. Fans, players, managers, pundits, politicians and many more members of the sport’s community had slammed the creation of the European Super League to help preserve the soul of the game.

Manchester City were the first English club to pull out of the competition after Chelsea had signalled their intent to follow suit by preparing paperwork to withdraw. The other four clubs—Manchester United, Liverpool, Arsenal and Tottenham Hotspur—have all now officially withdrawn from the proposed Super League.

The move from the Premier League clubs following backlash from all corners of the world leaves just six sides—Real Madrid, Barcelona, Atletico Madrid, Juventus, AC Milan and Inter Milan—still a part of the project.

Manchester City confirmed they have “formally enacted the procedures to withdraw” from the European Super League.

Chelsea confirmed they have “begun the formal procedures for withdrawal from the group” that they only joined “late last week”.

On Tuesday evening, Chelsea fans protested outside the Stamford Bridge ahead of their Premier League game against Brighton and Hove Albion. The supporters made it clear that they were against the club’s intentions to join the Super League. There was a confrontation near the entrance of the Stamford Bridge involving former player-turned technical and performance advisor at Chelsea, Petr Cech, who actually had to plead fans to let the team bus enter the ground.

Manchester United withdrew from the Super League after “listening carefully to reaction from our fans”.

We will not be participating in the European Super League.#MUFC

The Red Devils also announced on Tuesday that executive vice-chairman Ed Woodward will leave the role by the end of 2021.

Arsenal went a step further by apologising to fans, adding they had “made a mistake” and were withdrawing from the proposed Super League after listening to them and the “wider football community”.

As a result of listening to you and the wider football community over recent days we are withdrawing from the proposed Super League.

We made a mistake, and we apologise for it.

Liverpool said their participation in the proposed breakaway league “has been discontinued”, with skipper Jordan Henderson making his disapproval vocal on behalf of the squad on Twitter.

Liverpool Football Club can confirm that our involvement in proposed plans to form a European Super League has been discontinued.

Tottenham Hotspur chairman Daniel Levy said the club as a whole “regretted the anxiety and upset caused by the ESL proposal”.

We can confirm that we have formally commenced procedures to withdraw from the group developing proposals for a European Super League (ESL).#THFC ⚪️ #COYS

UK Prime Minister Boris Johnson tweeted: “I welcome last night’s announcement. This is the right result for football fans, clubs, and communities across the country. We must continue to protect our cherished national game.”