Covid-19 has wreaked havoc on entire nations, the internal fabric of the global human population, resulting in the loss of many peoples livelihoods and ultimately the loss of many peoples lives. It has also meant that sports tournaments the world over have had to take a backseat as governments try to cope with this pandemic and its many variants and try to regain control of their respective economies, and citizens in their respective countries.

One such tournament that was postponed was the 2020 UEFA European Football Championship, commonly referred to as UEFA Euro 2020 or simply Euro 2020. This football spectacle, the tournament only being second in importance to the Soccer World Cup, is played every four years, and brings together the top 24 nations teams across Europe. The teams that have qualified for this tournament for Euro 2020 in their respective groups (to be played this year from 11th June to 11th July 2021) are as per below. 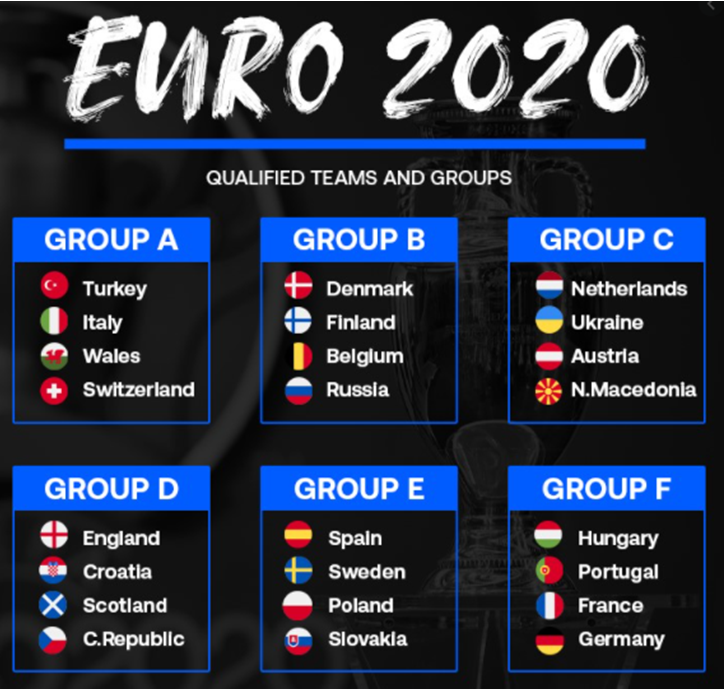 After the group stage and knockout stages have been completed, two teams will be left standing, and those two nations will do battle at Wembley Stadium in London to be crowned champions and the winners of EURO 2020.

A first for the tournament this year is that no one country will be hosting the tournament, but the venues of the group stages will be spread across eight countries. All these eight countries have been drawn into different groups to give said hosting countries’ national teams an equal opportunity to qualify for the knockout stages.

At the time of writing, England is the bookmakers’ favorite to lift the trophy at Wembley Stadium on the 11th July. However, France, Belgium, Germany, Spain, and Portugal round out the top six single-figure teams on the boards.

Each team has several elite players, ranging from strikers to midfielders, defenders, and of course, the goalkeeper. These individual players will provide moments of brilliance during matches via an assist, a goal, or a save, but the nation that wins this tournament will be the team that performs holistically, as a team, that fight for each other and gives their collective all for each match.

England is the bookmakers’ favorite, albeit at a relatively generous 5/1 at the time of writing, to win the tournament. At first glance, they seem to have all the tools in their arsenal, from Jordan Pickford in goal who has been in brilliant form of late for club side Everton, to Chelsea and Aston Villas’ young guns in the midfield in the form of Mason Mount and Jack Grealish, to one of the best center-forwards in world football, Harry Kane.

Add the solidity of Michael Keane, the doggedness of Harry McGuire, the silky passing skills out of defense of John Stones as well as the leadership of Jordan Henderson. Finally the speed and trickery of Jadon Sancho of Borussia Dortmund and Raheem Sterling of Manchester City on the wings and it’s not too difficult to see why they are the favorites to win EURO 2020.

Belgium qualified for this tournament in a canter, accumulating maximum points in their group. Roberto Martínez’s men have question marks surrounding their defensive attributes because just as we know they have the ability and skills, will the aging legs in that defense be able to sustain the solidity we witnessed in the qualifiers against some of the best athletes in the world.

They do, however, have two arrows to their quiver that very few have. Belgium midfielder Kevin De Bruyne is arguably considered to be one of the best midfielders in the world, as described by some, the complete midfielder. The 29-year old’s journey has been a long and varied one until he arrived at Manchester City, the current Premier League Champions.

Romelu Lukaku is simply a beast who scores goals for fun. He had plied his trade in the Premier League for Chelsea, Manchester United, and Everton, so if his nation reaches the latter stages of the competition, residing in London and playing at Wembley Stadium will not be foreign to him. He has been in scintillating form for Inter Milan this season, leading his club side to their first Serie A title in the last eleven seasons. De Bruyne and Lukaku will both be critical components in Belgium’s push to win the EURO 2020 this year.

Summary of other contenders

Although England and Belgium are the top two choices across the bookmakers to win the tournament, the list does not end there. Cristiano Ronaldo will lead a resurgent Portugal into the group stages with a point to prove at, as some would say, an advanced thirty-six years of age.

At the other end of the spectrum is reigning World Champions France, with the tip of their spear being twenty-two-year-old wunderkind, Kylian Mbappe. His electric pace, direct running, and body swerves will test the best defenders in the world and Didier Deschamps side will have a stellar midfield of stars to achieve success.

Spain will be able to call on their La Liga stars from Real Madrid and Barcelona, as well as their Premier League stars, to bolster their bid for a fourth EURO tournament trophy. From Manchester United’s David De Gea to Real Madrid’s Sergio Ramos and Liverpool’s Thiago, Spain will present a formidable challenge to any nation opposing them.

There will be much discussion amongst the soccer enthusiasts and the soccer analysts as EURO 2020 draws ever closer. From who will win the Golden Bot, to best young player of the tournament to who will progress from Group F, the “Group of Death.

However the main conversations will center around who will lift the coveted trophy at Wembley Stadium on July the eleventh, Will it be England or Belgium, will Spain win the fourth Cup, or will it be current World Champions France. No matter your opinion, you can place a bet on your favourite team on any one of the multiple betting platforms available for EURO 2020 betting.