Everton are among the Premier League clubs who have scouted VFB Stuttgart forward Silas Wamangituka this season. 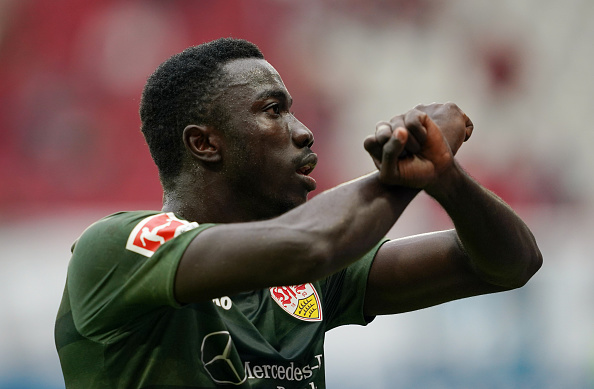 One of the promising talents in Germany this season, Silas Wamangituka, 21, has registered 11 goals and three assists in 22 Bundesliga appearances, helping newly-promoted VFB Stuttgart in a comfortable mid-table position. The young forward enjoyed a productive month in January, scoring in four consecutive games that included wins over FC Augsburg and Mainz.

The Congolese, who has been dubbed the ‘new Nicolas Pepe’, has caught the attention of Fulham’s scouts as well ahead of the summer transfer window. However, Everton and Fulham may face stiff competition from some top clubs in the Bundesliga for Wamangituka’s signature.

Everton have come a long way under Carlo Ancelotti, with the progress made by the Merseyside club in more than a year very much apparent. Ancelotti has instilled grit, determination and winning mentality in his Everton team that registered its first win over Liverpool at Anfield for the first time since 1999.

The experienced Italian tactician has his sights set on a top-four finish in the Premier League after a 1-0 success over Southampton left his side two points behind fourth-place West Ham with a game in hand. The Royal Blues can move into fourth place tonight with a win over West Bromwich Albion at the Hawthorns.

To be in a top-four race, competing with teams like Manchester United, Leicester City, West Ham, Liverpool and Chelsea with 13 games of the season remaining should be seen as progress by the Everton fans. The Toffees still are a long way to challenge the Premier League elites for the title but a place in the Champions League next season would be a huge success.

The Toffees’ lack of depth in attack

Dominic Calvert-Lewin has been a revelation as the spearhead of Everton’s attack this season, scoring 13 goals in 22 Premier League appearances. The England international has been well supported by Richarlison, who had an excellent February as he scored four times in all competitions. James Rodriguez has sprinkled a bit of stardust to the Toffees’ forward line in an otherwise injury-hit debut campaign at Goodison Park.

However, Everton lack quality alternatives in front of the goal beyond Calvert-Lewin and Richarlison. Moise Kean is currently out on loan to Paris Saint-Germain, while Bernard hasn’t been a consistent performer at the club. Alex Iwobi and Gylfi Sigurdsson are decent options to have from the bench but the Merseyside club can certainly do with more depth in their squad to challenge for trophies next season.

Silas Wamangituka could be an exciting addition to the Everton squad

Everton going all out in their pursuit of Silas Wamangituka would represent a smart long-term move. The Congolese is playing for Stuttgart like a man in form and would add more goals to an exciting Everton attack given his goalscoring record in the Bundesliga this season. The 21-year-old can operate as a striker, winger or midfielder, and this sort of versatility could provide cover to Ancelotti’s side in various positions.

Wamangituka is already performing at a very high level and still has plenty of room for development at 21. He is a player filled with huge talent and potential; thus, Everton must go all out to secure his services during the summer transfer window.