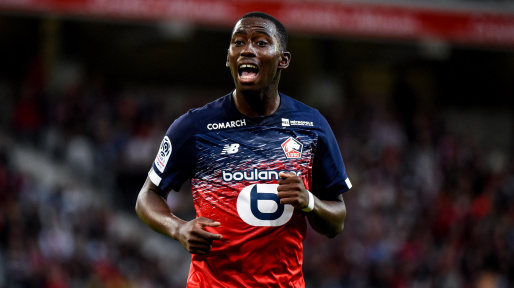 Boubakary Soumare, 22, one of France’s brightest young talents, has been an ever-present for the Lille side that presently leads the Ligue 1 table by two points ahead of Paris Saint-Germain. He has been impressive at the heart of Lille’s midfield, making 31 appearances across all competitions this season. The defensive midfielder has represented France at every age group level between U16 and U21 but is yet to make his senior international debut.

Manchester United, Manchester City and AC Milan are among the clubs that have scouted the Frenchman, who has just one year left on his deal at Stade Pierre Mauroy. Soumare could be on the move at the end of the season, as Lille may want to cash in on him before his contract expires in 2022.

Leicester City look on course to qualify for the Champions League

Leicester City are enjoying another solid season under Brendan Rodgers, as they find themselves third in the Premier League and remain on course to qualify for the Champions League after narrowly missing out last campaign. The Foxes have performed consistently and rightly are ahead of the likes of Chelsea, Liverpool, Tottenham and Arsenal.

Brendan Rodgers has built an exciting Leicester City side but they are not in the same bracket as the likes of both Manchester clubs, Liverpool or Chelsea to compete for the Premier League title. For that to change, the Midlands club needs to add more quality and depth to their squad to rub shoulders with the Premier League elites.

One of the Foxes’ top performers this season has been central midfielder Youri Tielemans, who has registered six goals and two assists in 26 league appearances. The 23-year-old is one of the first names on Rodgers’ team sheet, forming a strong partnership with Wilfred Ndidi in the middle of the park.

Tielemans and Ndidi add protection to Leicester’s backline, whilst allowing James Maddison to play his natural game from his favoured no.10 position. As back-up options, Rodgers has Nampalys Mendy, Daniel Amartey and Hamza Choudhury. However, the Midlands club need more quality alternatives in midfield, with Dennis Praet injured and the trio of Mendy, Choudhury and Amartey not offering an awful lot to the set-up.

Putting things into perspective, Leicester City should up their ante to sign Boubakary Soumare from Lille this summer.

Since moving to Lille on a free transfer from Paris Saint-Germain in the summer of 2017, Soumare has become a key player for Les Douges. At the young age of 22, the France U-21 international making over 100 appearances for Lille across all competitions, and the fact that he has garnered interest from some of Europe’s top clubs is a testament to his talent and ability.

A defensive midfielder by trade, the 22-year-old could form a strong partnership at the heart of Leicester’s midfield with Tielemans. A potential deal for Soumare would also reduce the defensive responsibilities and workload on Ndidi, who has endured an injury-hit campaign at the King Power Stadium. Plus, he’ll be a massive upgrade on the likes of Amartey, Mendy and Choudhury.

Given the reputation he has built at Lille in France and with his best years still potentially ahead of him at 22, Soumare would be a real coup for Leicester City at £30million.