Borussia Monchengladbach midfielder Florian Neuhaus has been linked with a move to the Premier League, with Tottenham Hotspur and Liverpool believed to be interested. 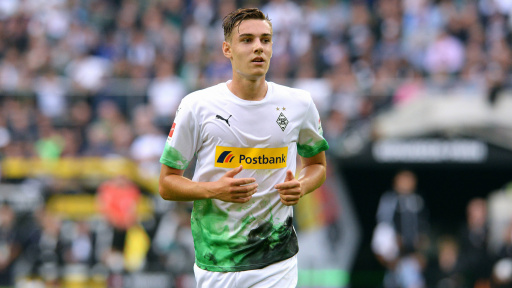 A youth product of 1860 Munich academy, Florian Neuhaus, 23, moved to Borussia Monchengladbach in the summer of 2017 and has impressed in recent seasons at the club. The midfielder has scored four goals and registered as many assists in 22 Bundesliga appearances so far.

The 23-year-old was called up to the senior Germany squad for the UEFA Nations League matches against Spain and Switzerland in September 2020. Neuhaus marked his debut for Die Mannschaft with a goal against Turkey in a friendly game in October 2020.

The Monchengladbach star, who has also attracted interest from Bayern Munich and Borussia Dortmund, reportedly has a £34.5million release clause in his contract, which runs until 2024.

Meanwhile, Tottenham ended their two-game losing run in the Premier League with a 4-0 thumping of Burnley at the Tottenham Hotspur Stadium on Sunday. It was a much-needed victory that manager Jose Mourinho will now hope galvanizes Spurs, who are six points behind fourth-place West Ham but with a game in hand.

It hasn’t been a good season for Tottenham in the league and Mourinho must continue his work in order to help them climb higher up the table. The Lilywhites may have reached the Europa League round of 16 and are due to face Manchester City in the Carabao Cup final in April, Mourinho has plenty of food for thought ahead of the summer transfer window.

Spurs have some really top players in the forward department but it is the lack of creativity and flair in the middle of the park that continues to be a big problem for them. Pierre-Emile Hojbjerg, signed from Southampton in the summer, has been one of Spurs’ best players this season. The Denmark international, however, isn’t known for his goalscoring ability, neither is Moussa Sissoko, who is yet to score a goal in the league this campaign.

Tanguy Ndombele has improved leaps and bounds after a tough first season in English football, scoring three goals and assisting once in 23 games. The Frenchman has succeeded in winning Mourinho’s trust back, becoming one of the most important players at the club. Nevertheless, the Spurs boss should demand a lot more from Ndombele, with Giovani Lo Celso and Erik Lamela’s season marred by injuries.

Dele Alli has struggled for regular minutes under Mourinho, managing just seven league appearances so far. He was heavily linked with a move to Paris Saint-Germain during the January transfer window but a deal never came to fruition. Should he continue getting limited game time, it won’t be a surprise to see the England international leave Tottenham at the end of the 2020/21 campaign.

Even though Spurs have a lot of midfielders in their ranks, Mourinho has so far failed to find a quality central midfielder to help his team perform on a higher level consistently.

Florian Neuhaus could be a smart signing for Spurs

Neuhaus has been a consistent player for Borussia Monchengladbach for the last couple of seasons, and at 23, he is at the right age to take the next big step in his career. Having proven his mettle in the Bundesliga, there is no doubt that the German is talented and his qualities would immensely benefit a team like Tottenham.

Consistency is something that has eluded Spurs throughout this season, with Mourinho’s side finding themselves 23 points adrift of league leaders Manchester City. Thus, it would do them a world of good to have someone like Neuhaus, who’ll not only add quality to Spurs’ midfield but also depth to their squad.