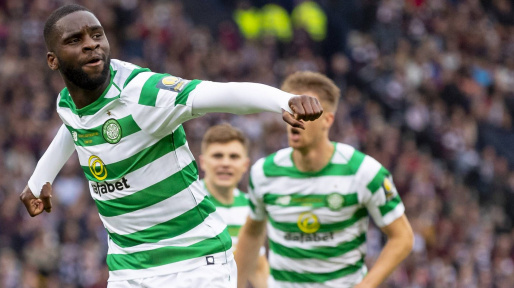 Odsonne Edouard, 23, who initially joined Celtic on loan from Paris Saint-Germain in 2017 before signing permanently a year later, is one of the hottest talents in Scottish football. The Frenchman has been brilliant for the Hoops over the last couple of seasons, playing a huge role in the club’s achievement of a quadruple treble in 2020.

The 23-year-old striker is in great form this season with 11 goals and four assists in 23 games across all competitions. Following three trophy-laden years with Celtic, Edouard is now reportedly desperate to test himself in the Premier League and prefers to join an established top-six club, with Arsenal and Tottenham believed to be admirers.

Sebastien Haller arrived at West Ham from Eintracht Frankfurt with a big reputation in 2019 but failed to deliver the goods as he managed only 10 Premier League goals in 48 appearances during his one-and-a-half-year stay at the London Stadium. The Hammers recently sold the Ivory Coast international to Ajax for around £20m which has left Moyes’ striker department depleted.

Haller’s exit means Moyes has only Michail Antonio as the only recognised senior striker in his ranks. Antonio has sprung into life since returning from injury, scoring two goals in the last four appearances. But considering the 30-year-old’s wretched injury record in the last three years, it is vital for West Ham to fill the void left by Haller this month, even if it costs them big.

Oladapo Afolayan is a talented young forward who scored on debut in West Ham’s 4-0 FA Cup victory over Doncaster at the weekend. That could see Afolayan get more opportunities with the first-team in this busy fixture schedule. Suffice to say, the east London club must bring in another striker to replace Haller and take the pressure of Antonio’s shoulders.

Odsonne Edouard would be a terrific addition to West Ham

Thus, Moyes’ interest in Edouard makes complete sense. Edouard has proven himself in the Scottish Premiership, with 74 goals in 151 games to his name. Standing at 6ft 2in tall, the former France Under-21 international has the physicality and the aerial ability to deal with the rigours of Premier League football.

Since leaving PSG for Celtic, the 23-year-old has progressed by leaps and bounds. Regular game time with the Hoops has allowed Edouard to make a real impression in Europe, although he isn’t a finished article yet.

A quality striker like Edouard would offer West Ham some valuable cover and quality in the final third. At 23, the Frenchman certainly has the best years ahead of him and the Hammers would have a real gem in their hands if they manage to strike a deal for him this month.

With just 18 months left in his contract at Parkhead, West Ham should definitely have a crack at signing Edouard to bolster the forward department.