West Ham have opened talks with Sassuolo over the signing of striker Gianluca Scamacca, who is also coveted by Paris Saint-Germain. 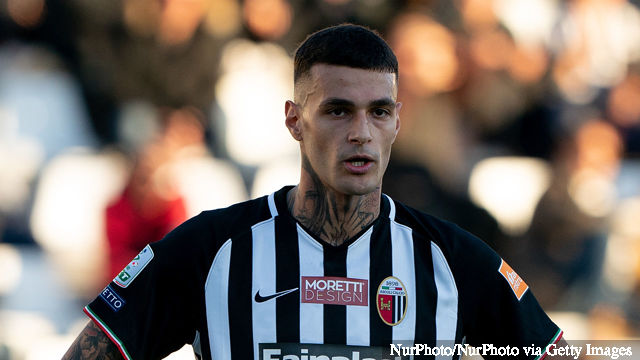 Paris Saint-Germain have been tracking Gianluca Scamacca, as new manager Christophe Galtier looks to freshen up his squad. Scamacca, 23, scored 16 goals during a solid 2021/22 campaign for Sassuolo, and his performances have also seen him become a regular in Roberto Mancini’s Italy side of late.

West Ham are also interested in the forward but could face a battle from PSG to convince him to move to the London Stadium. Sassuolo value Scamacca at €50m—a figure which PSG have so far been reluctant to meet. This has given West Ham a chance to initiate contacts with the Serie A outfit after manager David Moyes decided to step up his interest in the Italy international.

Scamacca, however, isn’t the only striker on the Hammers’ shortlist. The club are also interested in Armando Broja, who is also on the radar of Everton, Newcastle United and Napoli, though it is unclear whether or not Moyes wants to chase the Chelsea striker’s signature this summer.

Is competition for Michail Antonio a priority?

West Ham have enjoyed a productive transfer window so far, signing the likes of Nayef Aguerd, Alphonse Areola and Flynn Downes. The club and David Moyes remain in the market for a number of positions as they harbour hopes of breaking into the top four next season.

Having strengthened the defence and midfield, Moyes has now set his sights on getting in a new striker to compete with Michail Antonio, who turned 32 earlier this year.

Antonio has been one of the chief contributors of goals for the Hammers in recent years but Moyes cannot continue his over-reliance on him and keep his powder dry. The fact that the Jamaican international is the only striker in the squad has forced Moyes to play him week in, week out.

It took a toll on Antonio in the second half of last season, which the Scottish tactician must avoid this time around by signing a reliable striker.

Gianluca Scamacca could be a massive hit at the London Stadium

Gianluca Scamacca enjoyed his breakthrough campaign with Sassuolo, scoring 16 goals in 36 Serie A games, which has led to a number of clubs taking notice of him. West Ham are one of the clubs vying for his signature, as Moyes looks to manage Antonio’s workload this term.

Standing at 6ft 5ins tall, Scamacca is a physically imposing striker with impressive technical abilities. Apart from offering aerial threat, the seven-cap Italy international also excels in link-up play and creating chances for his teammates. He fits the profile of a striker Moyes likes working with, whilst offering valuable cover for the injury-prone Antonio.

If West Ham can beat PSG to Scamacca’s signature, it would represent a massive coup for Moyes.