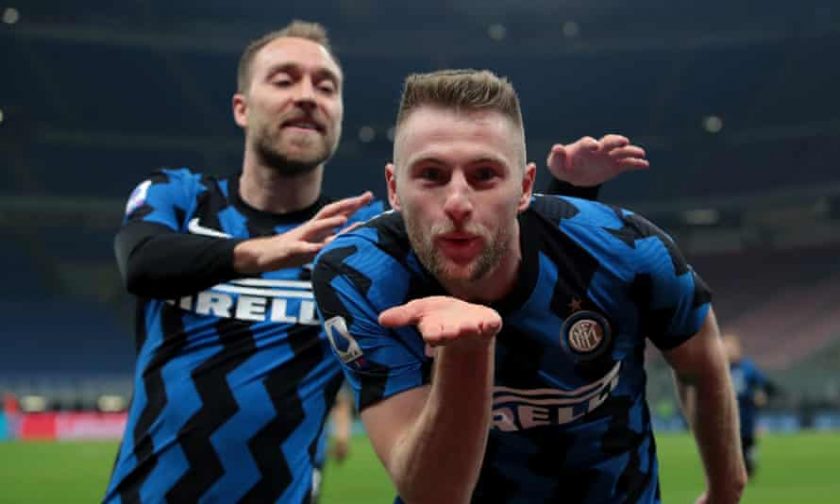 Milan Skriniar, 26, joined Inter Milan from Sampdoria in the summer of 2017 and has since established himself as one of Serie A’s top defenders. The centre-back has made 23 starts among 31 league appearances and been a vital player this season as Antonio Conte’s Inter Milan look to end Juventus’ decade-long dominance.

Tottenham were thought to be “very close” to signing Skriniar during the January transfer window for a modest £25million fee. However, the Serie A club pulled the plug on discussions as the 26-year-old defender had regained his lost mojo after a tough start to the 2020/21 campaign.

Despite the Slovakian international’s stock has gone up owing to his rich vein of form over the last couple of months, Inter Milan are still believed to be open to selling Skriniar due to their financial problems.

Tottenham have looked porous at the back this season, dropping 15 points from winning positions after Sunday’s 2-2 draw with relegation-threatened Newcastle United at St. James’ Park. The stalemate at Newcastle not only was a fresh blow to Spurs’ top-four hopes but also another example of their defensive conundrum.

As things stand, Tottenham are inside the top six and still have a realistic chance of qualifying for the Champions League, but falling further down the table will be unacceptable for them given the squad Jose Mourinho has at his disposal. Mourinho, a master tactician, has earned a reputation of building defensively robust teams with an excellent organisation down the years, but his Tottenham team remain far from it.

A veteran of many seasons, Toby Alderweireld recently turned 32 and has shown signs of slowing down, while Davinson Sanchez and Eric Dier have been very inconsistent. Young Japhet Tanganga must keep himself fit to enjoy more game time under Mourinho and summer signing Joe Rodon needs more experience to become a first-team regular for Tottenham.

If Spurs are to close the gap on the top two in the table, Mourinho’s top priority in the summer transfer window should be addressing the problems in his backline.

Having conceded 32 goals in 30 games so far and problems aplenty back, Tottenham should reinforce their backline with the acquisition of Inter defender Milan Skriniar.

A technically gifted, ball-playing centre-half, Skriniar is one of the finest defenders in Serie A and has been impressive for Inter ever since he arrived at the club in 2017. Standing at 6ft 2in tall, the Slovakian is powerful, robust and aerially strong, and never hesitates to put his body on the line for his team. He could very well be the player to change Spurs’ fortunes next season as he is a defender than can tackle, make interceptions, and add ownership and aggressiveness to Mourinho’s rearguard.

In Skriniar, the Lilywhites would have a top centre-back with strong organisation skills and leadership qualities. He is 26 years of age and could be the replacement for the ageing Alderweireld. All in all, Tottenham must pull out all the stops to sign the Slovakian international to secure their defence.