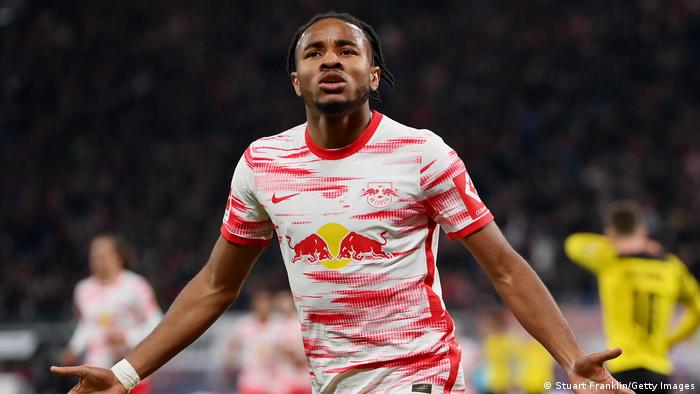 The Frenchman, 24, is enjoying a cracking season in the Bundesliga, with 11 goals and seven assists already under his banner. He has also netted seven times in six Champions League outings, which includes a hat-trick in RB Leipzig’s 6-3 defeat to Manchester City.

While RB Leipzig managing director Oliver Mintzlaff recently insisted that Christopher Nkunku will be going nowhere in the summer, Manchester United seem to be impressed with his performances and have added him to their shopping list.

Interim boss Ralf Rangnick knows Nkunku well having signed him for RB Leipzig from Paris Saint-Germain in 2019 when he was the Bundesliga club’s director of football. And the German manager has advised the Manchester United scouts to increase their focus on the French midfielder, who has also attracted interest from some of the European bigwigs including Liverpool, Real Madrid, Arsenal and Manchester City.

Whoever becomes Manchester United’s permanent manager at the end of the season will face the big task of rebuilding the squad.

The Red Devils are at risk of losing Edinson Cavani, Paul Pogba and Jesse Lingard at the end of the campaign, at which point all three players are set to become free agents. Cristiano Ronaldo is coming to the end of his career and could leave if the club fails to finish in the top four while Mason Greenwood is suspended for the foreseeable future following off-field problems.

Thus, the Red Devils must make the signing of an attacking player one of their priorities in the summer transfer window.

Is Christopher Nkunku the right deal?

RB Leipzig’s Christopher Nkunku is the latest player to be linked with a move to Manchester United.

Nkunku’s versatility is something that immediately catches the eye, with the 24-year-old having featured on both the left and right side of midfield, down the middle and up front for Leipzig this term. He has created plenty of chances, assisted his teammates and scored goals, which has currently made him such a hot property.

Such flexibility can make the 24-year-old a vital asset for Man United. The former French youth international is quick, a good dribbler, industrious and creative with ice-cold composure in front of goal. With 71 goals contributions in 115 games for Leipzig, Nkunku has real quality and top potential to make an immediate impact at Old Trafford.

The Leipzig ace could be a perfect long-term option given his tactical flexibility and an aggressive style of play that makes him a tailor-made fit for the Premier League. But with Nkunku being highly sought-after in the transfer market, Man United will need to make their move quickly.