Manchester United are among the clubs monitoring RB Leipzig star Dominik Szoboszlai ahead of the January transfer window. 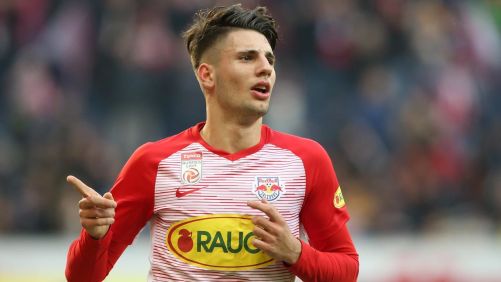 Dominik Szoboszlai, 21, swapped Red bull Salzburg for Red Bull Leipzig in January 2021 but a long-term injury delayed his debut until August, where he came on as a substitute in a German Cup game against SV Sandhausen and scored a couple of minutes later.

The midfielder has shown great form for RB Leipzig so far this term, scoring six goals and registering three assists in 15 appearances across all competitions. This has alerted a number of European giants, including Arsenal and Manchester United, who are believed to be interested in meeting the Hungarian international’s £51m release clause.

The Red Devils have dropped down to the sixth position in the Premier League table after losing thrice in their last four games, leaving them nine points below league leaders Chelsea. Ole Gunnar Solskjaer is under tremendous pressure following his team’s dismal run of form, which includes recent hapless defeats to bitter rivals Liverpool and Manchester City.

Manchester United could face a potential midfield crisis going into the next season if a couple of footballers leave the club in the coming months.

Paul Pogba is out of contract at the end of the season and hasn’t shown any willingness to pen an extension at Old Trafford, meaning he is free to discuss a pre-contract agreement with non-British clubs starting from January. Moreover, the Frenchman recently sustained a thigh injury while taking a shot in France training, ruling him out for no less than 10 weeks.

Donny Van de Beek has cut a forlorn figure since arriving from Ajax last summer and he is yet to start a Premier League game this season. Having recently changed his agent, the Dutchman, who is on the radar of cash-rich Newcastle United, is keen to leave for pastures new to revive his career elsewhere if his situation doesn’t improve at Man United.

Nemanja Matic is 33 and past his prime, while Scott McTominay and Fred aren’t up to the standards to start week in, week out for the Red Devils.

Man United could benefit from the signing of Dominik Szoboszlai

This is why the Red Devils need a midfielder and RB Leipzig’s Dominik Szoboszlai would fit the bill perfectly at Old Trafford.

Szoboszlai is a versatile player who excels as an advanced 8 in a midfield three, as a no.10 behind the striker or on the left flank. The 21-year-old is a top passer of the ball, can spot a pass in the final third with his vision and creativity as well as the time he runs into the box perfectly to finish off a move. He is technically sound and tactically flexible, which would allow the manager to use him as per a game’s demands.

At the tender age of 21, the Hungarian international has a long way to go in his career and if Man United can get his signature, they’ll bag a talented player with great potential destined for bigger things in the future.