West Ham are among a few Premier League clubs linked with a summer move for Espanyol winger Adrian Embarba. 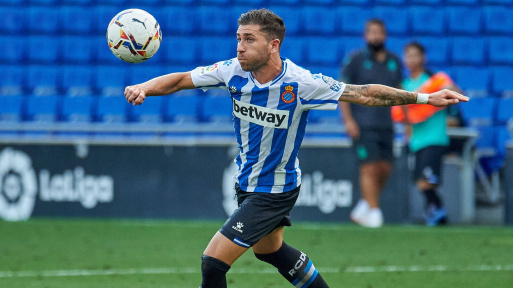 Adrian Embarba, 29, transferred to Espanyol from Rayo Vallecano in January 2020 after his €10 million release clause was paid. The Spanish winger enjoyed a brilliant season for Espanyol, scoring nine goals and supplying 14 assists on top of that from 37 appearances as they gained promotion to La Liga.

And the 29-year-old’s performances for the Catalan club hasn’t gone unnoticed, with Wolves and newly-promoted duo Norwich City and Watford all keen on his signature. LaLiga clubs such as Levante and Real Betis also hold an interest in Adrian Embarba, who has a contract at the RCDE Stadium until the summer of 2023.

Meanwhile, West Ham will want to build on an excellent 2020/21 Premier League campaign, in which they ended with a sixth-place finish. This will see the Hammers compete in the Europa League next term and it could potentially help them land quality players during the upcoming summer transfer window.

It is no secret that West Ham needs a quality striker to cover and compete with Michail Antonio. The departure of Sebastien Haller in January left David Moyes with only Michail Antonio as the recognised number nine, and while the 31-year-old led the Hammers’ attack very well, Moyes must manage him well to keep him fit throughout the next campaign.

Jesse Lingard, signed on loan from Manchester United in January, was the catalyst to the east Londoners’ Europa League qualification. The England international made an instant impact at the London Stadium with his pace, energy and direct running making him a perfect fit in David Moyes’ system. He ended the past season with nine goals and five assists in 16 games.

Having impressed on a short-term loan spell, Moyes clearly wants to sign Lingard permanently from Manchester United. However, West Ham fear the Red Devils will block any attempts to sign the English attacker, who has just one year left on his current United contract.

Lingard will return to Old Trafford next month after the expiry of his West Ham loan, which is certain to leave a void for Moyes to fill in the transfer market.

Are the Hammers right in targeting Adrian Embarba?

In Said Benrahma, Jarrod Bowen and Andriy Yarmolenko, West Ham do have options in wide areas but they lack real depth in that area. In that regard, West Ham’s interest in Espanyol’s Adrian Embarba makes sense.

Embarba was one of the heroes behind Espanyol’s promotion to LaLiga this term. The Spaniard has plundered a mammoth 44 goals and 59 assists in 252 appearances for Rayo Vallecano and Espanyol combined in all competitions, which is certainly an incredible record for someone who is not an out-and-out centre-forward.

Benrahma and Bowen chipped in with some valuable goal contributions this past campaign for the east Londoners. However, with Yarmolenko failing to deliver, West Ham could do with someone like Embarba. As well as his quality to create and score goals in equal measure, the right-winger would also offer Moyes with some much-needed cover in multiple areas in the attacking third, given his versatility.

While he lacks experience at the very highest level, his record with Rayo Vallecano and Espanyol suggests that Embarba has what it takes to cut the mustard in the Premier League.