Although it seems as though Manchester City will be crowned Premier League champions for the fifth time in their history, for now, their celebrations are on hold. 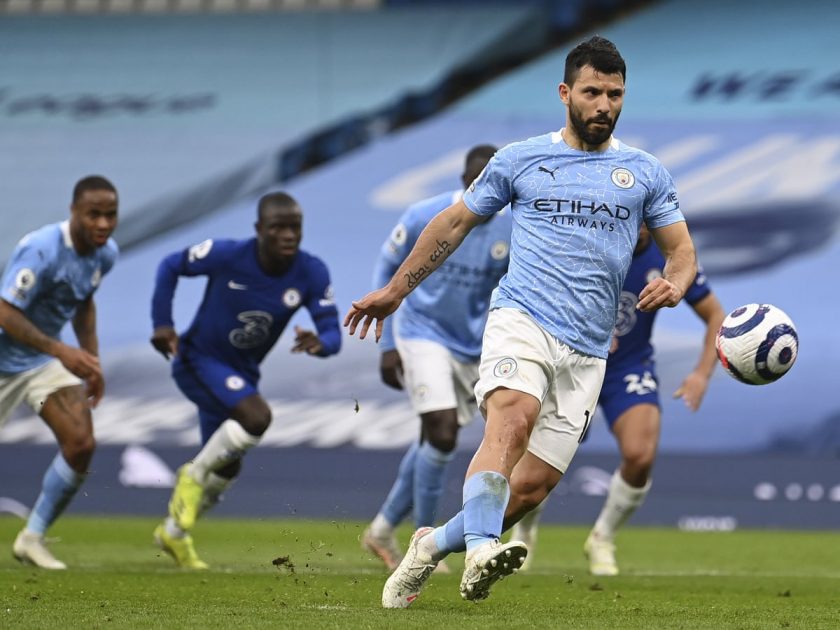 City lost 2-1 to Chelsea after a bright start saw them 1-0 up thanks to a goal from Raheem Sterling. A missed penalty by Sergio Aguero though gave Chelsea the belief that they were still in the tie.

And out they came in the second half, and it took 18 minutes for Chelsea to be level thanks to Hakim Ziyech’s goal. It seemed as though the game would be a draw though, however it was the last word from Marcos Alonso, who struck on the 92nd minute to wrap up a 2-1 win for the Londoners and keep the champagne on ice for AT LEAST another 24 hours, as City would wait for their neighbor’s result.

But of course, as all eyes turned to Manchester United in their game, they would not want to be the ones to hand their rivals their fifth title.

Despite being 1-0 down to a Bertrand Traore goal at Villa Park, it took a second-half come back with goals from Bruno Fernandes, Mason Greenwood and substitute Edinson Cavani to give United a 3-1 win and keep that champagne on ice for a little while longer.

However, with four games to go and United sitting on 70 points, 10 points behind City who have played a game more, it seems as though it may not all be over and that United may be able to go one better and overtake City. Well never say never, it could mathematically work.

If United win all four of their remaining games, they will end up on 82 points. But City need one more win in their remaining fixtures against either Newcastle, Brighton or Everton and let’s not forget, each of those teams can pull off shocks against big teams.

Newcastle and Brighton are trying to maintain their safety in the league as Brighton sit 10 points clear and Newcastle 12 points clear with safety not exactly confirmed. Everton, on the other hand, are still trying to play for European football and have four games left to play as they sit three points behind fifth-placed West Ham who have played a game more.

So it will not exactly be an easy run in for City but they do need just one win to confirm their champion status and wipe away all hope for United. Yet they also have a Champion’s League final to get ready for against Chelsea, whom they lost to in the latest round of fixtures.

As for United, they have remaining fixtures against Leicester, Liverpool, Fulham and Wolves.

Leicester and Liverpool are also fighting for a European place and although Wolves are safe, they will be looking to finish the season in style. Whereas Fulham will be looking for all four wins in their remaining games to ensure they do not get relegated.

It will be a total of six games in 17 days that will define United’s season. As they finish it with a Europa League final tie against Arsenal’s conquerors Villareal will they be going into that tie with the Premier League trophy? Or will their only hope of silverware be the Europa League? Well only time will tell but given how they did not give up against Aston Villa, we can expect that they will not go down without a fight!