With Ralf Rangnick taking over as the interim coach at Manchester United, things have calmed down to an extent, at Old Trafford. One of the main objectives for United this season will be to nail down a UEFA Champions League spot and trim their ‘large’ squad. With as many as 29 players, United are carrying one of the heaviest wage bills and too big a dressing room. 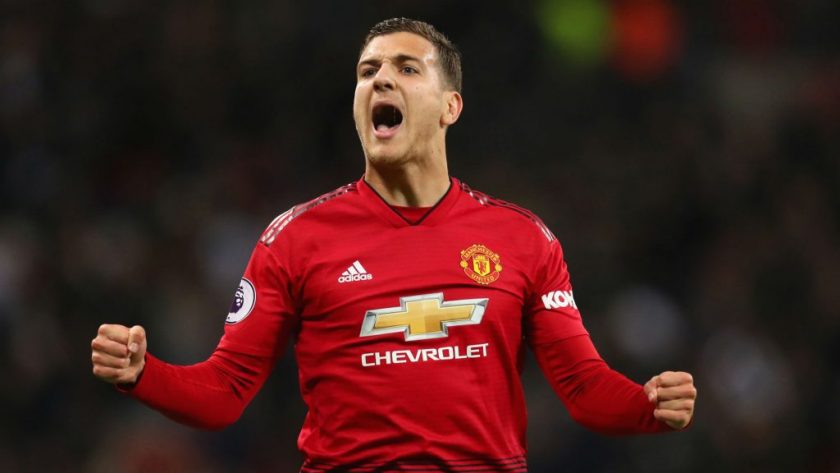 Numerous United stars were linked with an exit this previous summer no substantial exits could materialize. Daniel James was the only player who left the club on a permanent transfer and Sergio Romero’s contract was terminated. The likes of Tuanzebe, Williams, and Pellistri were sent out on loan.

Diogo Dalot was one of the players linked with an exit last summer. Having spent the last season on loan at AC Milan, the Portuguese full-back was tipped to make a move from Old Trafford but United blocked any transfers for the 22-year-old.

Italian Journalist Fabrizio Romano on his Twitter account brought to light that Dortmund wanted the 22-year-old this summer but the Red Devils rejected the bid proposed by the Schwarz Gelben. As it stands, AS Roma is interested in signing Dalot this winter but with the United management said to be ‘more than happy’ with the player’s performances, it is looking increasingly unlikely that he will leave United this January.

Manchester United are ‘more than happy’ with Diogo Dalot performances. AS Roma wanted him for January but nothing was agreed – he’s now key player for Rangnick. Borussia Dortmund bid was turned down last summer – Fabrizio Romano (Source: Twitter)

Manchester United are ‘more than happy’ with Diogo Dalot performances. AS Roma wanted him for January but nothing was agreed – he’s now key player for Rangnick. Borussia Dortmund bid was turned down last summer. 🔴🇵🇹 #MUFC

Under Ole Gunnar Solksjaer, Dalot struggled for game-time in the early part of the season but under Ralf Rangnick, he has featured in two complete games, against Crystal Palace and Norwich City. He has been a regular feature in Rangnick’s selections and has made the cut above Alex Telles and Luke Shaw. The 22-year-old has featured in only 10 games for United this season and under Rangnick, he could be one of the regular starters.

Donny van De Beek is another player who has been linked with an exit this winter. The Dutchman was brought in last summer and has hardly made any impact at Manchester United, in his time thus far. In fact, he has only made 44 appearances for the Red Devils since the start of the last season. It has come as a surprise for the player as well as the pundits, who believe that van de Beek should be getting more game time on a consistent basis. Ole Gunnar Solksjaer stuck to the duo of Scott McTominay and Fred more often than not, pushing the former Ajax midfielder down the pecking order.

Ralf Rangnick has so far, not utilized the 24-year-old and the player could look to push for an exit this summer. Having said that, van de Beek is ‘valued’ by Rangnick at United and is unlikely to be allowed to leave midway this season. The equation of Donny and his career at Manchester United could take a serious turn at the end of the season.

For now, the likes of Paul Pogba and Anthony Martial are tipped to make an exit from United. The former looks set to walk out on a Bosman while the latter’s agent publicly disclosed his client’s desire to seek pastures new and that he ‘just wants to play’. Martial is slated to hold talks with Rangnick over his future in the coming days and Sevilla are said to be keeping a close watch on the striker’s situation, with the winter window in mind.