The 28th round of English Premier League is only a day away, meaning it’s once again time to look over at EPL Fantasy Tips for GW 28, what the next week will bring and which players we will field to represent our Fantasy team. 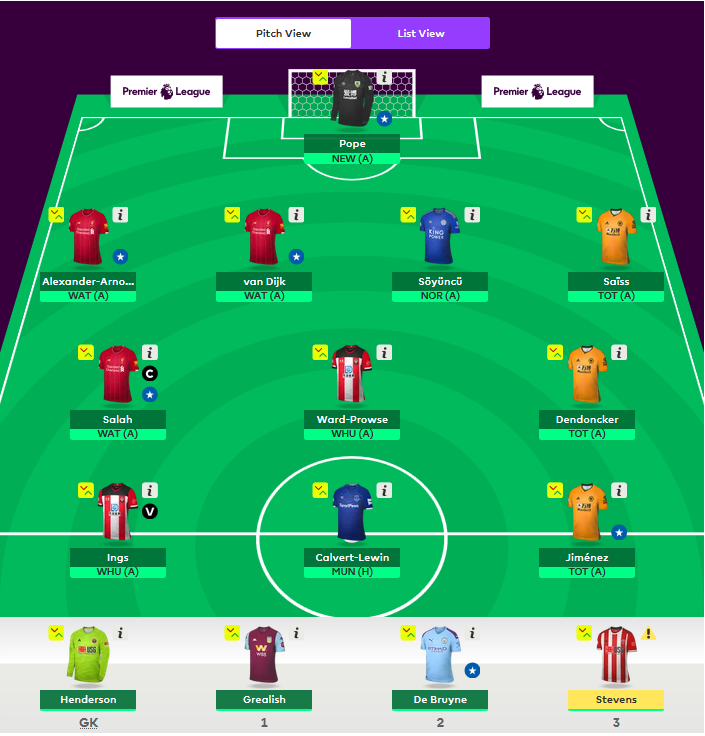 After making a mistake of fielding Henderson last week, we will take a shot with Pope this time around, although we don’t have much of a choice outside making a transfer, given that Sheffield’s match is postponed, meaning Pope is our only option. Pope will clash with Newcastle in what should be an interesting match, but given his great form, we will hope he can deliver and earn a nice return.

Four defenders in our line-up for this week in Alexander-Arnold, van Dijk, Soynuncu and Saiss. Liverpool are on a great run of form and with Alexander-Arnold’s incredible display last week, it’s safe to expect great things from him in GW28 as well. While van Dijk left a lot to be desired last round, he remains in our team for the time being.

Soynuncu and Saiss are the two new arrivals we had to make due to the postponed matches. Soynuncu and Leicester will travel to Norwich on Friday night, and we believe the Foxes have a solid chance of walking away with a clean sheet, given their surge in form recently and the Canaries struggles in the attack. Saiss, on the other side, will face off against Tottenham and although we don’t expect great things from him, considering he was brought in more as a replacement and investment for the next game weeks, he has had great performances lately and we will hope he can repeat them here.

Only three midfielders in our team for the next week in Salah, Ward-Prowse and Dendoncker. Salah had a great performance last week and we can expect something similar as Liverpool takes a trip to face off against Watford.

Ward-Prowse failed to deliver in his debut for our team, as he failed to make and attacking returns, however, we will keep him in our team as Southampton travels to face off against West Ham, which should be an interesting match with a couple of goals on display. Dendoncker has returned to our starting lineup after being benched for a while, not necessarily because he has had any standout performances, but rather because he is the best option we have. He might impress against the struggling Tottenham, however, and we will hope for that to happen.

The same trio that represented our squad for a while is back. Ings, Calvert–Lewin and Jimenez will enter GW28 in our attacking lineup and there are some reasons to be optimistic.

Ings is coming off a two-point game against Aston Villa, where he failed to contribute anything in the attack, however, with Wesh Ham on the menu, we can expect he will deliver and bring us a nice return this week. While there are arguments to be made Long is a better pick here, given that he is outperforming his colleague in recent fixtures, Ings still brings a lot of threat in the attack and we are not quite ready to swap him out yet.

Calvert-Lewin is in an excellent form and it’s hard to not field him in our team.  He has scored 12 goals already this season and four in his last five fixtures. While facing Man United will not be a cakewalk, Everton have shown enough for us to believe they are set to cause some chaos in the Red Devils’ defence. There are probably a few alternatives to Calvert-Lewin, but at his price, he is one of the best strikers any Fantasy can have – at least as long as he can keep up his form.

Last but not least, we have Jimenez, who has the ability to score and is another player we are happy to have in our team. He, alongside his teammate Diogo Jota proved to be a deadly duo in the opposition penalty box and while Wolves have a tough match ahead of them, Nuno Espirito Santo’s men have shown enough to make us believe they can frustrate Spurs.

A lot of changes were needed for our team this week, due to the postponed matches, but the final outcome looks fairly promising. The Liverpool trio should earn a nice sum of points, given their great form, while we will count on the Wolves trio to upset Spurs and bring home an attacking return for our team. Other than that, we will look at Ings and Ward-Prowse to step up for Southampton, while we will count on Calvert-Lewin to continue with his great form.