The 27th round of English Premier League has come to a close and we are here to look over at what has happened, which players reached the status of the GW27 dream team members and how our Fantasy team performed. So without further ado, here is our EPL Fantasy GW27 recap. 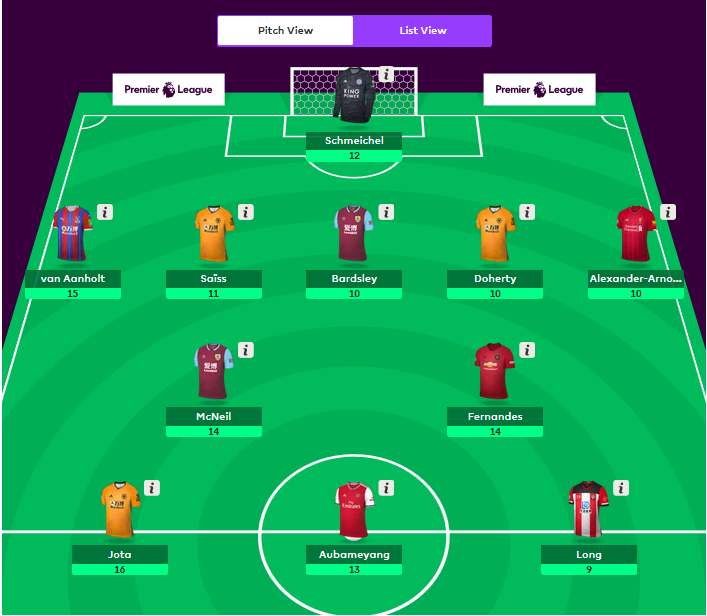 After a long streak of underwhelming results, Leicester finally found their footing and Kasper Schmeichel (12) played a pivotal role in his team’s success. The Foxes’ goalkeeper ended the week with 12 points, which he earned with a phenomenal performance in the goal, where he produced six saves and earned three bonus points.

Joining him in the back were van Aanholt (15), Saiss (11), Bardsley (10), Doherty (10) and Alexander–Arnold (10). Aanholt had a performance of his life last round when he scored a goal and kept a clean sheet to help Crystal Palace defeat Newcastle. Saiss on the other side, produced an assist in Wolverhampton’s win over Norwich, earning season-high 11 points. His teammate Doherty earned 10 points with his fourth assist of the season, while Bardsley helped Burnley with an assist of his own. The Liverpool star defender Alexander-Arnold had two assists to his name in Liverpool’s clash with West Ham United, however, he conceded two goals, which saw him earn only 10 points.

McNeil (14)and Fernandes (14) are the two midfielders of the GW27 dream team. McNeil scored a goal and added an assist for Burnley in their 3-0 win over Bournemouth, while Fernandes added a goal and assist for Man United in his third match for his new team. Both players earned 14 points, which was their season-high tally.

In the attack, the dream team featured Jota (16), Aubameyang (13) and Long (9). Jota put up a phenomenal performance against Norwich, scoring two goals and adding an assist, thus earned his season-high 16 points. Aubameyang scored twice against Everton in a closely-fought 3-2 win, while Long put up a standout performance with his second goal of the season, helping Southampton secure a crucial 2-0 win over Aston Villa.

The dream team of GW27 scored 134 points, which was 3 less compared to the GW26 dream team.

Now for our Fantasy team. 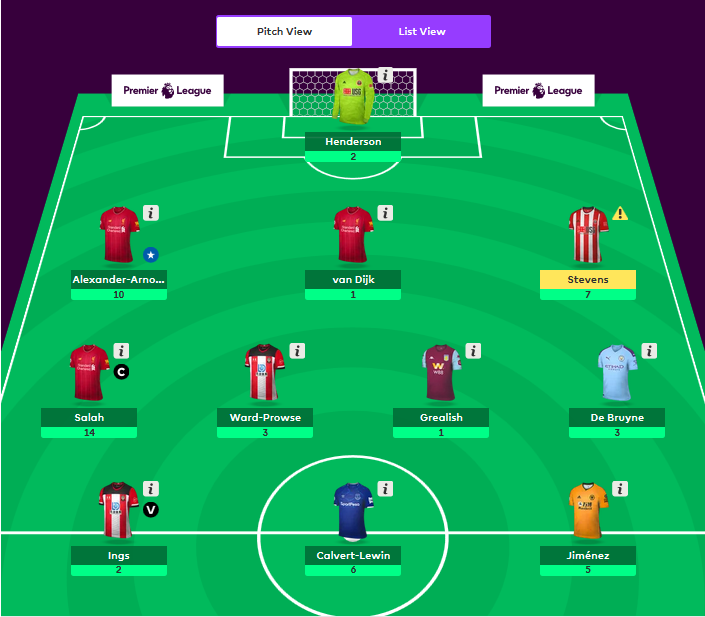 Standing in the goal, we had Henderson (2), who failed to impress. Despite the high hopes we had put on Sheffield United, they failed to defeat Brighton and instead had to settle with a stalemate. Henderson had one save to his name and earned a disappointing sum of two points. Pope, on the other side, had a great performance and earned nine points, which is disappointing to see, considering we opted to pick Henderson over him for GW27.

Our defensive trio of Alexander–Arnold (10), van Dijk (1) and Stevens (7) accumulated 18 points, which was a solid outcome. Alexander-Arnold once again proved why he is regarded as one of the best EPL players with two assists against West Ham, which earned him 10 points in total. Van Dijk, on the other side, did not make any offensive return and instead earned himself a yellow card, which brought down his total points tally to one. Stevens, as our third defender ended the week with seven points, which he earned with a goal against Brighton. It was his second goal of the season and a crucial one, as it secured his team a draw.

Salah (14), Ward–Prowse (3), Grealish (1) and De Bruyne (3) combined 21 points, which was far below our expectations. Salah, who we had high hopes for only scored once, which earned him seven points, but because he was our captain for this week, he walked away from GW27 with 14 points in total. Ward-Prowse and De Bruyne failed to make much noise in their GW27 fixtures and both earned only three points, while Grealish earned himself a yellow card and for that ended the week with only one point.

Ings (2), Calvert–Lewin (6) and Jimenez (5) combined 13 points, which is nothing to brag about. Ings failed to see much success in his GW27 fixture, where he failed to produce any offensive returns. Fortunately, both Calvert-Lewin and Jimenez scored a goal in their bouts, although we had hoped for more, given the opponents they faced.

In total, our Fantasy team scored 54 points, which is an OK result, but nothing spectacular. The biggest disappointment was our goalkeeper and considering we opted to pick Henderson over Pope his two points are a hard pill to swallow. Other than that, our midfield was just plain bad, as we expected a bigger return from both De Bruyne and Grealish. Despite the fact our Fantasy team underperformed compared to the expectations we had, 54 points is still above the week’s average of 45, so it’s safe to say things could’ve gone much worse.

Buggebakken City still standing at the top of our FPL after gameweek 27 with 1648 points, while Micks Mix is at the second position with 1611 points. Buggebakken City is currently at the 4534 position overall and it’s a great success to be in the first 5k fantasy players worldwide.