After 11 long days, the 26th round of English Premier League has come to a close, meaning it’s time for another EPL Fantasy recap, where we look over how the teams performed, which players earned a spot in the dream team and how out fantasy team did. 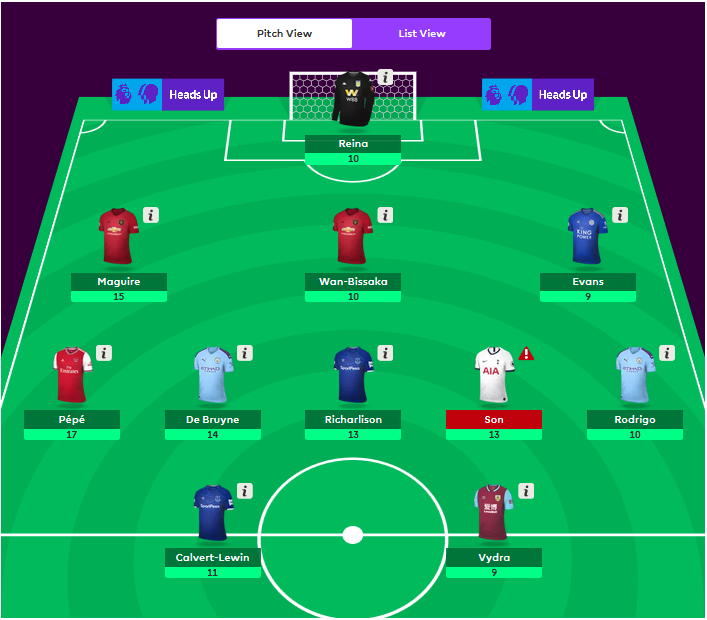 Jose Reina (10) has earned a spot in the dreamteam for his phenomenal performance against Tottenham, where he produced 13 saves and one penalty save. Unfortunately, that was not enough for Aston Villa to win, yet still enough for Reina to end the 26th round with 10 points. Joining him in the back are Maguire (15), Wan-Bissaka (10) and Evans (9).

Maguire played a crucial role in Man Utd’s win over Chelsea where he scored his first goal of the season, which helped him earn season-high 15 points. His teammate Wan-Bissaka walked away from the 26th round of EPL with 10 points by producing an assist and helping Man Utd keeping a clean sheet. The third and final defender of 26th round’s dreamteam was Evans, who helped Leicester pocket a stalemate against Wolverhampton and for that earned nine points.

In the midfield, we have Pepe (17), De Bruyne (14), Richarlison (13), Son (13) and Rodrigo (10). Pepe ended round 26 as the best-performing player in the EPL with 17 points to his name, which he earned with a goal and two assists against Newcastle. De Bruyne ended the round with 14 points, which he earned with one goal and an assist against West Ham, while his teammate Rodrigo scored only one goal last round. Richarlison produced a goal and assist last week, while Son scored twice in Tottenham’s win over Aston Villa.

Calvert-Lewin (11) and Vydra (9) were the two top strikers of Round 26, with 11 and 9 points respectively. Calvert-Lewin scored once and added an assist in Everton’s 3-1 win over Crystal Palace, while Vydra scored once against Southampton in Burnley’s 2-1 win.

The dreamteam of GW26 scored 131 points, which was 11 less compared to GW25 dreamteam.

Now let check our Fantasy team and how our lineup performed in the extended 26th round of EPL. 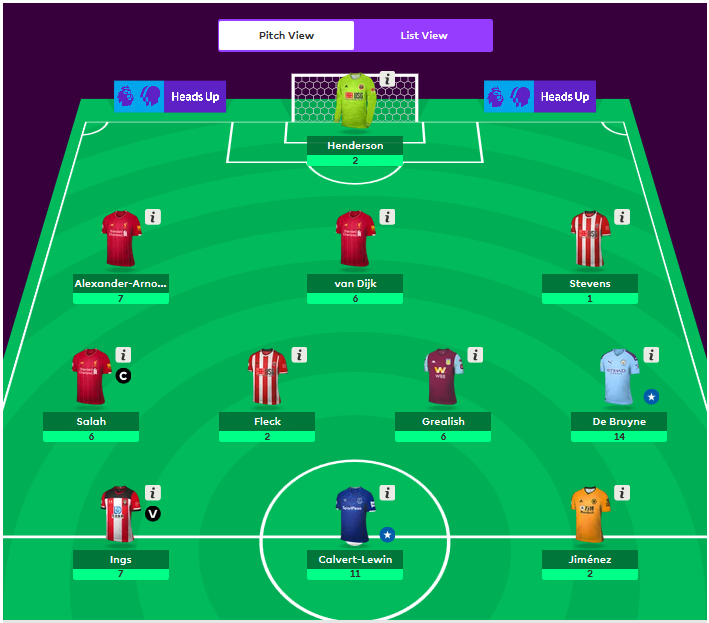 Our new addition to the squad Henderson (2) ended the 26th round of EPL with two points to his name, which is slightly underwhelming, given that Sheffield Utd failed to keep a clean sheet at home. Henderson produced one save and had no bonus points to his name.

Our trio of defenders Alexander-Arnold (7), van Dijk (6) and Stevens (1) combined 14 points, which is a solid outcome. The Liverpool duo played a pivotal role for our team as they combined 15 points with their solid performances, yet it was Alexander-Arnold who was the best performing defender of our team with a clean sheet against Norwich and one bonus point. It was his 11th clean sheet of the season and the third game in a row where he scored 6+ points. Stevens on the other side failed to see much success against Bournemouth, as he conceded his 24th goal of the season.

Salah (6), Fleck (2), Grealish (6) and De Bruyne (14) produced a combined total of 28 points, with De Bruyne contributing half of that. The Man City star scored a goal and added an assist in the Sky Blues’ win over West Ham United, which earned him a respectable 14 points. Unfortunately, he was not our captain, as we instead opted to give Salah the captain armband.

The Liverpool forward earned only three points for his performance in round 26 as he failed to score a goal, which was slightly underwhelming, given that Liverpool were playing against Norwich. Fleck ended the week with two points, as he did not contribute anything to Sheffield United in their win over Bournemouth, while Grealish stepped up for Aston Villa with his season’s seventh assist against Tottenham.

Our trio of strikers; Ings (7), Calvert-Lewin (11) and Jimenez (2) combined 20 points, which was a solid outcome in our books, although we hoped for more points from Jimenez. The Wolves’ striker played for the full 90 minutes but failed to see any success with the ball. Ings, on the other side, scored a goal for Southampton against Burnley and although that was not enough for his team to win, he still walked away from round 26 with seven points. Calvert-Lewin scored a goal and added an assist for Everton against Crystal Palace, which earned him 11 points and a spot in the dream team of EPL round 26.

Kristian Nagel Andersen and his team Buggebakken City stand at the top of our FPL after GW 26, but other teams are close. If we have in mind that there will be double gameweeks in the next 12 rounds and that many teams didn’t use chips, it will be more than interesting.