EPL Fantasy Tips for Gameweek 27 are ready for the upcoming weekend so let’s get started. Liverpool are entering round 27 of English Premier League still unbeaten, have already secured themselves a spot in the 2021 Champions League and can arguably already be crowned as the league champions. Nonetheless, there are still 12 more rounds left to be played and 12 more matches the Reds need to win in order to end the season without a loss. Will they manage to achieve that feat is anyone’s guess, but one thing is for sure; we have got a handful of exciting fixtures waiting to be played in round 27 and a lot of things to look over as we assemble our fantasy team. So without further ado, let’s check which 11 players we will field heading into the next EPL gameweek. 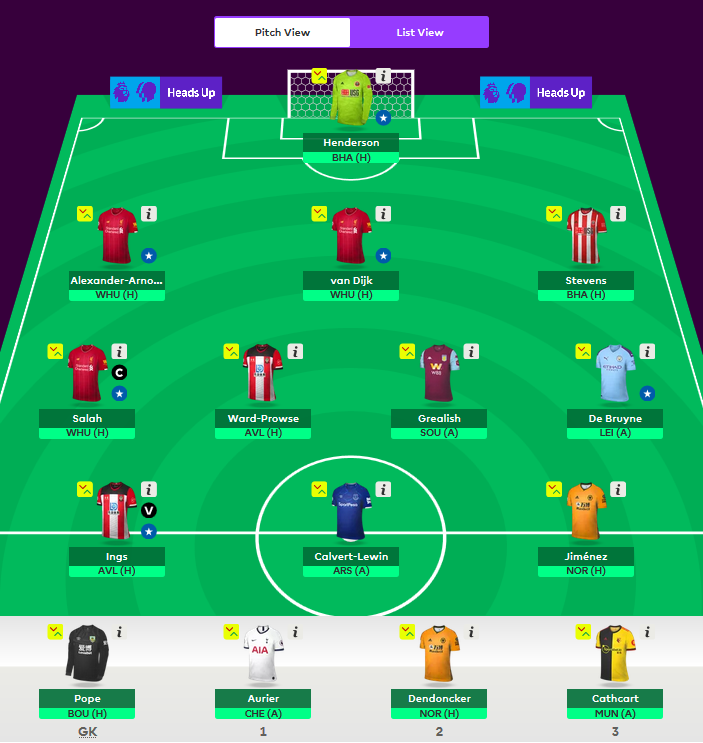 Standing in the goal of our fantasy team will be Henderson, who has had a couple of mediocre performances in recent weeks, yet he is set to enter a very favourable fixture when Sheffield Utd faces off against Brighton at home. Our substitute goalkeeper Pope also seems like a solid pick, but for this week, we will side with Henderson.

No changes for our defensive lineup ahead of the 27th round of EPL, meaning we will once more field Alexander-Arnold, van Dijk and Stevens. The Liverpool duo will play against West Ham United, which suggests a clean sheet will be a cakewalk for Klopp’s side. Enda Stevens failed to see much success last week when Sheffield played against Bournemouth, yet we decided to give him another shot as he could keep Brighton out on home stadium, as well as provide his usual threat in the attack.

Salah, Ward-Prowse, Grealish and De Bruyne will stand in our midfield, as a quartet of players we have high expectations for. Salah is offering a high point ceiling and is arguably one of the best captain picks of the week, given Liverpool’s next opponents. He has scored three times in the last three EPL fixtures and it’s safe to assume he will add another goal or two against the shaky West Ham’s defence on the home turf. Fleck has been replaced by Ward-Prowse, who seems like a solid pick against Aston Villa’s leaky defence. While he has not scored a goal since round 14 and failed to contribute an assist for three straight games, his time to shine might come this week and we will trust him to deliver.

Grealish has become a staple midfielder in our team and will remain as such for GW27. He has seven goals and assists to his name and continues to impress with his performance. He has double-digit hauls in two out of his last three away games and always carries goal and assist potential with him. Joining him as our fourth and last midfielder will be De Bruyne, who pocketed double-figure points midweek and it’s hard to expect anything less from him comes this week. He has created more big chances in his last four outings than any other player in the EPL. What’s more, Leicester have not kept a clean sheet since GW15, which suggests De Bruyne might be in for a very lucrative week.

Ings, Calvert-Lewin and Jimenez are our returning three strikers for GW27 and it’s hard not to be optimistic with what they can achieve.

Danny Ings’ form makes him an obvious pick for us, given that he has scored 15 goals already this season. He also scored once last week and considering he is facing Aston Villa, who are not exactly known for their solid defence, he could be in for another goal this weekend. Calvert-Lewin has proven to be a dangerous striker, as he is one of the top-five EPL players in terms of shots in the box over the last four rounds. He is also leading in creating the most “big chances” in the last four fixtures. Similarly to the Everton striker, Jimenez has produced one of the most “big chances” in last four rounds and is leading for shots on target, making him a no-brainer pick for this week as well.

In our substitutions, we have got Pope, Aurier, Dendoncker and Cathcart.

Looking at our Fantasy team ahead of GW27, we are confident this might be the best week so far. The strong Liverpool defence will most likely secure a clean sheet while also providing some danger in the attack, while the Salah-De Bruyne duo in the midfield possesses high potential for goals. Grealish is expected to cause some issues to Southampton, while Ward-Prowse and Ings will surely look to exploit Aston Villa’s poor defence.

Calvert-Lewin and Jimenez are both putting up very inspiring numbers in recent weeks and if their performance is anything to go by, they should cause some problems to their opponents this weekend, ultimately earning us a nice sum of points. We have decided to hand our captain armband to Salah.