We are back again with another English Premier League Fantasy team recap, where we look over what has happened in the previous round of EPL and check out how our Fantasy team performed. But as always, we first check the game week dream team i.e. the top 11 players of the week. 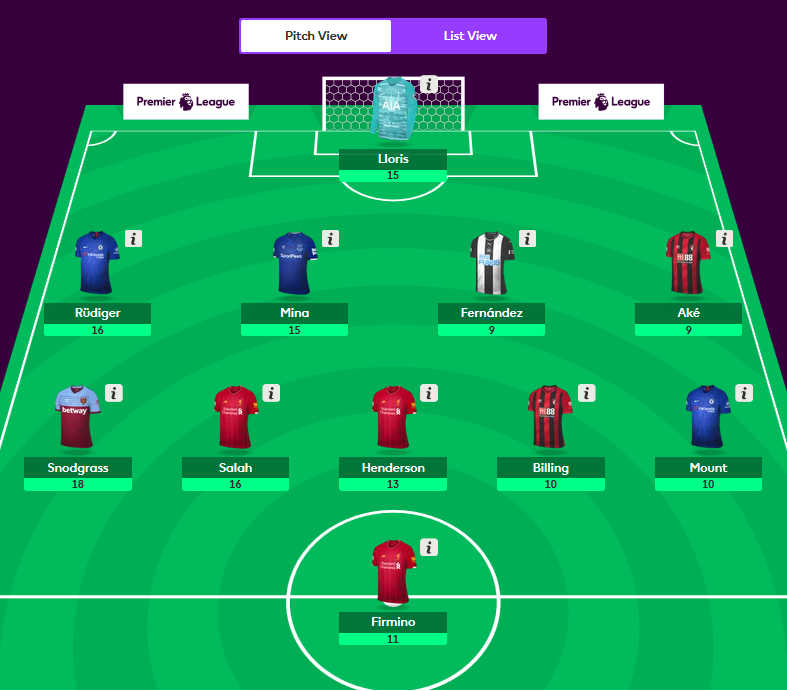 After months of absence, Hugo Lloris (15) finally got back to playing in the EPL and put up a show in Tottenham’s win over Manchester City last round, where he saved a penalty, put up five saves and a clean sheet, which earned him 15 points and a spot in the dream team of the week.

Joining him are four defenders – Rűdiger (16), Mina (15), Fernandez (9) and Ake (9). Rűdiger played a pivotal role in Chelsea’s stalemate against Leicester last weekend where he was the only goalscorer for the Blues with two goals to his name, which earned him 16 points and quite possibly a permanent spot as the starter for the team. Mina saw the same success in Everton’s against Watford, where he scored twice and earned 15 points. Fernandez ended the game week with a clean sheet and three bonus points, while Anke scored a goal for Bournemouth in their win over Aston Villa.

Snodgrass (18), Salah (16), Henderson (13), Billing (10) and Mount (10) comprised the dreamteam’s midfield. Snodgrass scored two goals and added an assist in West Ham’s 3:3 draw with Brighton, which earned him 18 points. Salah and Henderson played a pivotal role in Liverpool’s win over Southampton. Salah scored twice while Henderson scored one goal and added an assist, earning his season-high 13 points. Billing scored a goal for Bournemouth against Aston Villa, while Mount contributed two assists for Chelsea in their draw with Leicester.

Firmino (11) was the only striker of the dream team. While he did not score a single goal for Liverpool, he contributed three assists which alone was enough for him to earn 11 points and a spot in the dream team.

The dreamteam of GW25 scored 142 points, which was three less compared to GW24 dreamteam.

Now let’s take a look at how our Fantasy team compared to the dream team. 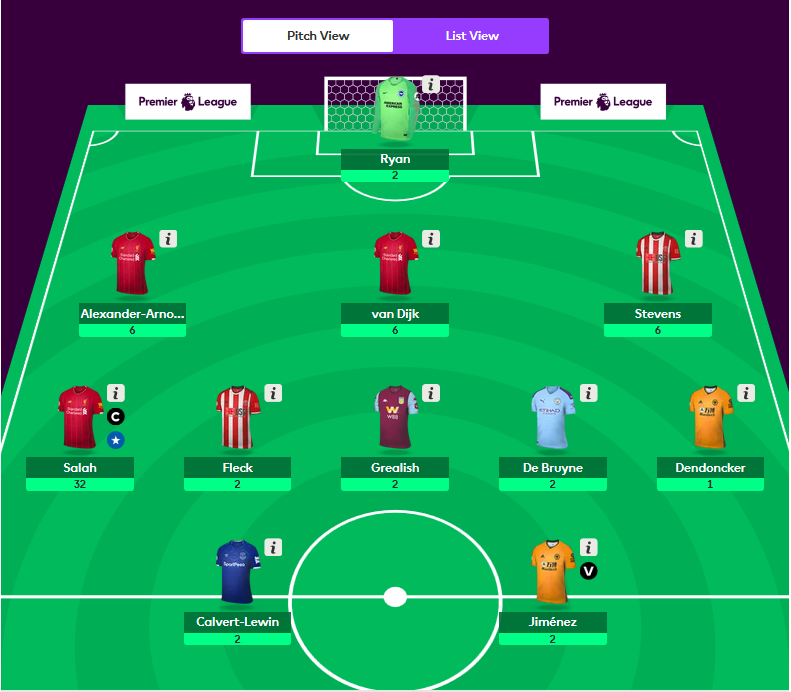 Ryan (2) failed to impress this week as he earned only two points in his meeting with West Ham, where he conceded three goals. It was a rather underwhelming result considering we decided for him rather than for Pope, who walked away from his meeting with Arsenal with six points in his pocket. Whether Ryan’s trend of poor results will continue is anyone’s guess, however, we will address his future in our FPL GW26 preview.

Alexander-Arnold (6), van Dijk (6) and Stevens (6) combined 18 points, which is a solid result in our books. Our decision to field Stevens instead of Lundstram proved to be the right choice, considering Lundstram played for only 22 minutes and earned one point. Stevens on the other side played for full 90 minutes and while he failed to score a goal or contribute an assist for his team, he still helped Sheffield Utd keep a clean sheet against Aston Villa. Alexander-Arnold and van Dijk both helped Liverpool to a commanding 4:0 win against Southampton. While neither scored a goal or had an assist to show, they still ended the game with six points apiece, which is a solid outcome in our books.

Our quintet of midfielders – Salah (32), Fleck (2), Grealish (2), De Bruyne (2) and Dendoncker (1) combined 39 points which is a very solid result overall, however, it was Salah with his two goals against Southampton who earned almost all points. He ended the week with 16 points, however, because he was our captain, his total tally came out to 32 points. That said, the remaining four players left a lot to be desired with their performances, as neither managed to score a goal nor contributed an assist to their teams, which was underwhelming, to say the least, seeing how we had high hopes for De Bruyne. Denconcker on the other side played for only one minute, thus contributed only one point to our team

There are not a lot of positives to say about our attacking duo. Calvert-Lewin (2) failed to make any noise in Everton’s meeting with Watford. Despite the fact Everton scored thrice, Calvert-Lewin was not involved in a single goal, thus failed to provide any attacking results. The same can be said for Jimenez (2), who did not see any success in Wolverhampton’s meeting with Manchester United. Both scored only two points this week.

All in all, GW25 was slightly underwhelming as only our three defenders and Salah had a decent night. Despite that, however, we still managed to score 63 points which are far above the week’s average and considering we have passed the 60-point mark, there is no reason to complain.